I want to be. Inside Out. 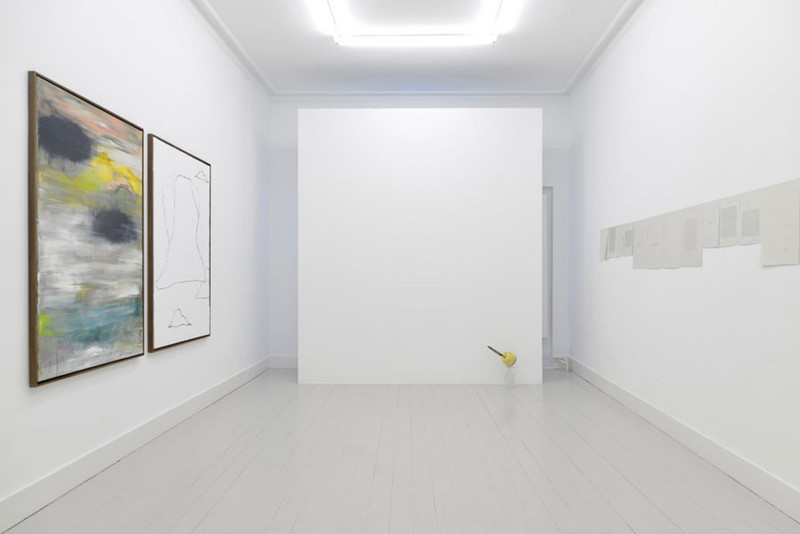 MOT International Brussels is delighted to bring together a selection of works by Benoit Maire, Ulrike Müller, Anouchka Oler, Zin Taylor and Sue Tompkins. The exhibition echoes a strategy often used by Benoît Maire in his practice—experimentation with relationships between forms and texts by bringing the disparate in close proximity to one another. This grouping of distinct works allows for unpredicted connections to emerge between language, the body and the performance of both into objects.
Benoît Maire’s practice is centred on theory as a medium and the speculation of the divide between saying and seeing. The included new works take the form of a script, a painting and a reproduction of an ancient bust made of soap, the soap, paint and words highlighting the potential for instability and transformation. Invested in philosophical thought, Maire deploys images and objects as an efficient mode of assessing an idea.

Similarly to Maire, Ulrike Müller also creates an alternative language for interrogating the dichotomies between form and content, abstraction and figuration. To create her

enamel pieces, Müller combines the handmade with the industrially produced. She works with an actively changing and distinctly abstract geometric language as a way of codifying bodily forms with queer politics. The sexualised triangles, lines and circles are imbued with a sense of humor and a clear reference to popular culture. The shapes become syntax open to interpretation in order to break with the didactic system of binaries, such as masculine and feminine.
The physicality of Sue Tompkins live spoken-word performances is re-contextualised as text-based wall works. Each jolt of her body and rhythmic inflection of her singsong voice is translated through the typewriter; the surface of the oversized folded-to-fit newsprint is imprinted by each hammer of the inked slug of metal type. Created, borrowed or altered snippets of songs and fragments of every-day phrases are combined with grids or clusters of organised punctuation marks. The works on paper act both as the record of the artist’s body and voice, as well as a score or set of instructions for a performance.

Anouchka Oler’s film Épisode 2 (2014) is the sole work in the exhibition that utilises audio. The artist’s own authoritative voice articulates an anxiety with contemporary individualism illustrated through the contrast between the rebellious group of her hand-made sculptural forms set against a backdrop of collaged reproductions of historical antiquities. The narrator, as collaborator in the performance, moves from a place of control to one of saddened confessional. Drawing attention to the futility of a sole authorial voice, and the inadequacies of human limitations, Oler fills the void of the absent voice for both the objects and the artist.
Expanding on the abstraction of narrative Zin Taylor’s collages are part of: The Story of Stripes and Dots. The recurrent zigzag pattern in his work suggests a visual transcription of a random and disruptive conversation. The patterns are overlaid with photographic images of dislocated human and animal body parts—extendable plastic ears, a face enveloped by a beard, a tie-died torso with a blank whiteout face—breaking up the symmetry of the jagged black lines. Taylor’s formal vocabulary gives form to conceptual thoughts and abstract notions.
www.motinternational.com