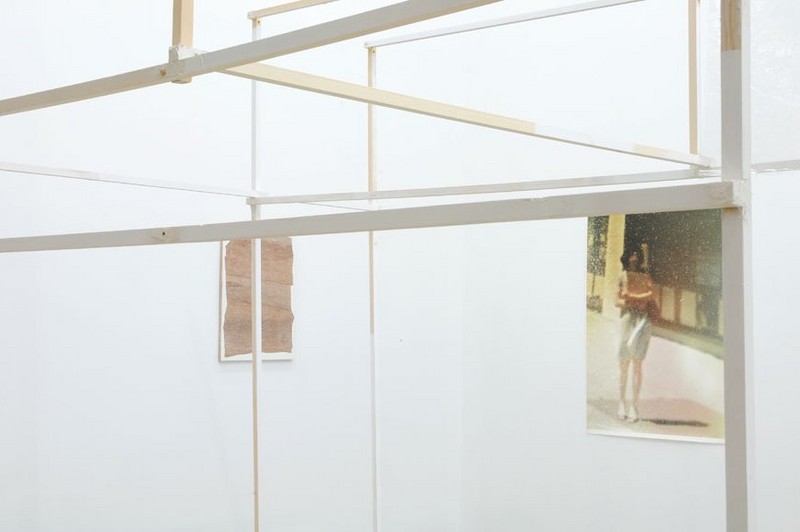 MOTINTERNATIONAL BRUSSELS is pleased to announce a solo exhibition by newly represented artist Shahin Afrassiabi. Constructed specifically for installation at MOTINTERNATIONAL BRUSSELS, the works within Active Principles and Forms of Life both literally and metaphorically re-frame the sense of the gallery space as a container of values.

Consonantly, works are presented not as passive objects, but as active, almost social sites which refer directly to the spaces in which they are contained. Afrassiabi works to fore-ground issues of value as they pertain to labour, discourse and material, both with the art world and the economy at large. Viewer, container and object are reconciled to create what the artist describes as a ‘form of life’.

The presence of digital projection, layering an animated video of a wooden construction onto the object itself, forces correspondence between apparently irreconcilable technologies and processes. The object’s sculptural body is inhabited by a ghost image of itself and in a sense, the exhibition at large is a happy corpse to which this ghost returns only in order to haunt it, a kind of perverse auto-traumatic mechanism.

This mechanism is reintroduced in Afrassiabi’s voyeuristic photos which index spaces outside the gallery and add a narrative operative to the exhibition. However, these works undermine the possibility of closure to any viable position in relation to their content. The images advance Afrassiabi’s economical modes of production as ‘poor’, elusive portraits sourced at distance from Google Earth. A rift is maintained between the promise of resolution on the one hand and the images and objects initiating this promise themselves, producing a simultaneous provocation and postponement of recognition and its fulfillment. This is reinforced by the photographs’ display of impoverishment both in the way they are made and presented and in what they re-present.
www.motinternational.com