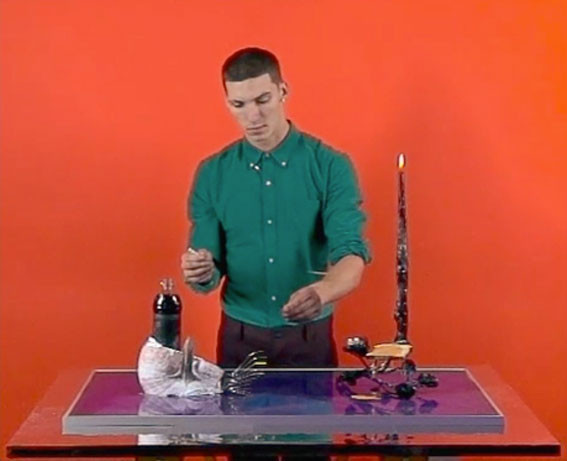 Scene One:
A man stands motionless behind a pink tabletop within a yellow room.
Dressed smartly in a blue shirt and tan slacks, he stares blankly into the camera.
On the table before him sits a small perfume bottle and an even smaller jar.
A black egg rests upon the perfume bottle, a green and lavender straw upon the small jar.
The time and place are unclear [but the details are important]... 1

Alex Da Corte’s (born New Jersey, 1982, lives and works in Philadelphia) A Season in He'll is an elegantly decadent video trilogy, based on the cult poem by Rimbaud (1873), of nearly the same title (in translation 2) – minus the apostrophe. As Da Corte’s grammatical addition suggests, these works point towards the future of will, “he will”, in fact, but with an implied, claused, conditional case, within which harbours the essence of potential doubt: What becomes of choices, particularly when they are hypothetically placed within an artificial, consequence-free vacuum? Within this narrowed, claustrophobic framework, Da Corte’s trilogy explores the notions of potential and immanency; “Between the desire / And the spasm / Between the potency / And the existence / Between the Essence / And the descent / Falls the shadow.” 3 Does human nature naturally surge towards the self-indulgence of hedonistic pleasure, or adhere to the increasing abstractions of humanistic ethics and morals?

“When I was still a little child [past /eternal tense], I admired the hardened convict on whom the prison door will always close [future unconditional /eternal tense]; I used to visit the bars and the rented rooms his presence had consecrated; I saw with his eyes the blue sky and the flower-filled work of the fields; I followed his fatal scent through city streets. He had more strength than the saints, more sense than any explorer – and he, he alone! was witness to his glory and his rightness.” 4

Interestingly, the programming of Da Corte’s piece at mother’s tankstation – not only does it nestle nicely against Matt Sheridan Smith’s poisonous plants – but it occurs alongside some potent developments in the public perception towards some contemporary art, and raises significant questions surrounding the role, the cause and effect of art in the present world, particularly associated with notions of indulgence and excess. 5

Alex Da Corte’s lone protagonist, common to the three works, is a heavily stylized human being; a young Werther, Des Esseintes, or Dr. Frankenstein perhaps, removed from his loved ones, from the world and left to his de(vices). In all instances he is centrally framed, composed or isolated in a colourfield world. Set against a solid ground, much like that employed by Irving Penn in his compelling shift from the fashion studio to ethnographic documentation – a native American chief against dabbled grey ground – Da Corte employs, or transports a dropped-in, (as if from out space) backdrop to neutralize, or liberate the ‘subject’ from the invasive history and reference points of a contextualizing / (de)stabilizing world. All the action becomes focused upon the objects ‘before’ the subject, nothing behind or ‘after’, (literally) matters, beyond the impact of colour sensation. The tabletop, a temporalized ‘Nature Morte,’ becomes the subject’s lab bench, a slow motion research facility for a scientist in a void, a world reduced, but ripe for invention and discovery within the confines of the self.

“In cities, mud went suddenly red and black, like a mirror when a lamp in the next room moves, like treasure in the forest! Good luck, I cried, and I saw a sea of flames and smoke rise to heaven; and left and right, all wealth exploded like a billion thunderbolts.” 6

Each of the individual works richly imagines a mind reveling or corrupting in the culpability of self. In Da Corte’s A Season in Hell, the protagonist, the subject, intakes pleasure, fertility, leisure; appearing as a dandy in the full excess of forward motion, without remorse (as noted above, with ‘nothing’ behind). Conversely, in Bad Blood, the subject mutates from scientist into anthropologist, a cook, or even a bartender: He collects and measures taste/s (amassing and combining decoratively lush objects), distilling them, and pressing himself against the full experience of that which taste or choice has to offer (even if that means self- hurt, exposure or destruction). The Impossible finally returns to the subject (a bit thinner now) on an inevitable path towards vice, or at least, with the appearance of acceptance; a form of peace in amoralistic pleasures – Rimbaud’s “native road”?

“Let us set out once more on our native roads, burdened with my vice, that vice that since the age of reason has driven roots of suffering into my side – that towers to heaven, beats me, hurls me down, drags me on.” 7

Da Corte’s videos starkly, yet lusciously, employ props that relate to familiar and harmless domestic objects and practices. Yet, curiously this familiarity is carefully perverted or sideways or twisted to equally reference the obscene and remote. Ordinary things are flipped towards the unexpected, the (in)evident, the unapparent, as if they have been misunderstood by, or viewed without ‘normal’ understanding from another, exteriorized world. The artist notes this balance of familiarity and oddness in the usual, the stools, tables and utensils in Bosch’s Garden of Earthly Delights, the commonplace made nightmarish. Objectivity shifts to subjectivity, as the world slips and distorts in between the rational moments, according to the beat of T.S. Eliot’s pendulum. Or as the artist puts it: “The videos propose to be viewed from a place in the future, imagining how it must have been so strange living in the early part of the 21st century.”

2 Rimbaud, A Season in Hell, originally titled in French; Une Season En Enfer. According to various sources, Rimbaud began this visionary work in London in 1872 under the increasing influence of Absinthe, and completed it in France the following year under the further influence of Opium. Graham Robb’s biography of Rimbaud hypothesizes that this begins to explain "... why some of his [Rimbaud's] poems are so hard to understand, especially when sober". The work has nine parts or cantos (which differ markedly in tone and narrative comprehensibility, with some, such as "Bad Blood," 'being much more obviously influenced by drug use than others); Introduction, Bad Blood, Night in Hell, Delirium 1: The Foolish Virgin - The Infernal Spouse, Delirium 2: Alchemy of Words, The Impossible, Lightning, Morning and Farewell, from a number of which Da Corte sources his chapter titles.

5 Excess; “...nothing succeed likes it”, notes Maggie Smith playing the Dowager Countess in Downton Abbey, but it has at least, and indisputably, generated some remarkable and enduring texts, Rimbaud and Huysmans, amongst others.

Any excuse for an aside:

In our world (the real world?) things are equally uncertain. We feel a ripple; the time and place seems to have come again (as evidenced at least in moments of the British and American popular press) to declare war on contemporary art. Not only is it “uncool”, but “artistically and commercially inflated and over-rated”, it is also probably a load of junk anyway, yet again, and the public have been once more cleverly deceived by manipulative money and power hungry-dealers, dressing very little in yet another set of Emperor’s clothes. Along with super-rich collectors and corrupt, or overly compliant institutions, they (allegedly) are killing-off present art. Well, in some instances, yes, but it is hardly a UNIVERSAL TRUTH. Certain recent retrospectives may well have been misjudged, but such shows are intended to reveal depth and history, but it may, unfortunately, merely and unintentionally reflect nothing other than a history of superficiality. Speaking as a non-multi-national, not-very-rich-or-powerful gallery that has never supported art works or artists of slender or questionable quality/integrity or purpose, nor those who have clearly, willingly embraced or bowed to fashion and commerce; may we just say; (or make a stand and shout very loudly) that not all art is driven by such a lack of ethics and principles. Good art is beautiful; life affirming (or questioning), but always contributes to debate rather than detracting from it. It enhances the world. As the viewer, you are always invited to the gallery, it’s always free and mostly the art is not even for sale. In the meantime... God bless the multi-national powerhouse dealers, for your contributions..., just try not to fuck it up too much for everybody else.