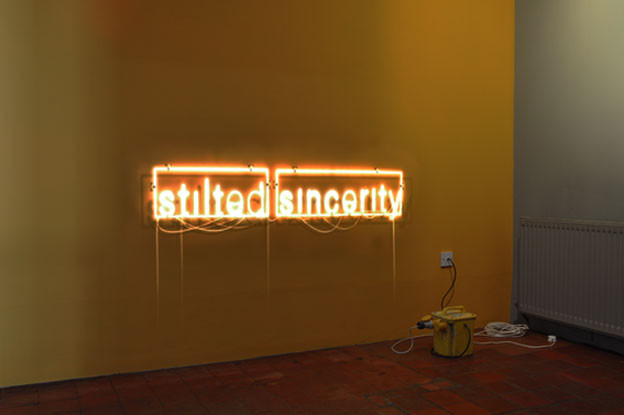 The beginning of a course of action.

In his now famous text, Ten Rules of Writing,1 the late Elmore Leonard ‘casually’ noted,2 “(Joseph Conrad said something about words getting in the way of what you want to say.)” While, from my incomplete digging, what I think Conrad might actually have said was, “...words, as is well known, are the great foes of reality”,3 the form of Leonard’s memory-softened, first-personalized and far from throw-away remark is an object lesson, by example, in the writer’s sleight of hand. Shane McCarthy’s debut solo exhibition title and variation upon the same thought; Words, sometimes, get in the way of meaning, interestingly, appropriately, throws structure into the mix (the comma [pause for consideration] is king). McCarthy pushes the key signifiers out to the ends; “words...meaning”. Meaning, that if you either read everything, or skip everything in between4, then the core dialectic, absence/presence, remains apparent/evident. Language, smaller: words, now there’s the thing; tricky little, minxy, mini-concepts, like ‘solo’, like ‘debut’, like ART. Do they have greater, easier or diminished meaning in a world defined by search engines? Let’s run it.

1. A first public appearance, as of a performer.
2. The formal presentation of a young woman to society [just women?- feigns outrage!].
3. The beginning of a course of action.

Warm, cooler, hotter. “The beginning of a course of action”, seems apposite to McCarthy’s show (I’m not doing the title again, but I can italicize it for you), as it not only opens a new season in the gallery, a return from the endless, languid, Irish summer [!], into the more reflective, darker cools of Autumn. But, by necessity ‘it’, a début show, sets out a stall, describes an envisaged path, a realization of sorts, of what has been previously noted as a sense of exceptional promise, anticipated in and of McCarthy’s work. With concretization, the commitment of a complete, full-scale show, promises are either broken or kept. No pressure.5 A course of action looms.

Upon what grounds is an ‘anticipation’ anticipated? ‘Shane McCarthy’, what do we know of him? The great search engine brings us to various options of person, but reality, like any ‘creative’ process involves choices. Re-focus: our Shane McCarthy (born 1988, graduated IADT, lives and works in Dublin) is a very precise being. His works, his words, his structures, his animated projections epitomize this precision, yet maintain an air of exquisite improvisation at the same time. There have not been many of them (works or shows) to date; a degree exhibition, a fine re-structuring of the same installation in the aptly named “Beautiful Potential” show, and two other works made for LISTE Basel 2012, which held ground, with poise and elegance, alongside Nina Canell and Uri Aran. McCarthy has time on his side, but anticipation/expectation is based upon the fact that every work has been made with the intention to count, also that his work exhibits a rare ability to instinctively “allure”. What is perhaps most alluring about McCathy’s sculptures, (let’s call them that, or, if being super-specific, carefully arranged sculptural installations), is their ability to walk the immanence/potential tightrope, between the excitement of the many directions in which an ‘incomplete’ work may yet diversify, and the closure, the sadness of resolution. McCarthy’s course of action is right in-between, an aesthetically negotiated stand-off, where collective meaning floats or hovers, somewhere between pronouncement, intention, (mis)understanding, deception, truth and ‘reality’ (whatever that actually is? 6)

McCarthy’s texts - realized in fading, pulsing projected light - allure with what has been described as the false promise, or “glamour” of neon signs. In a recent Mousse Magazine interview with McCarthy, the writer, Maeve Connolly notes; “...the properties of light and language intertwine, emphasizing the power of both to attract or even seduce. ...I was recently reminded (by the art critic Caoimhín Mac Giolla Léith) of the etymological relationship between “grammar” and “glamour”. The notion of putting a “glamour” (or spell) on someone suggests an assertion of power, founded in part upon learning and a facility with language.” 7

McCarthy’s analysis is cool (not that ‘Cool’), but almost detached, as if almost floating alongside his work: “I view this [practice] as a kind of dialogue (or perhaps a system that facilitates dialogue) between its disparate elements, such as the “scene”, its material objects, language and [its] meaning. One that is viewable, both from within its structure and more abstractly as a whole by the viewer, encouraging reaction within a closed-looped system. This hopefully causes an enfolding and unfolding of its concept.”8

Concept:
1. A general idea derived or inferred from specific instances or occurrences.
2. Something formed in the mind; a thought or notion.
3. A scheme; a plan, a course of action

Action:
1. The state or process of acting or doing.
2. Something done or accomplished; action speaks loader than words.

1 Originally published as a 2001 article for The New York Times in the series, ‘Writers on Writing’: http://www.nytimes.com/2001/07/16/arts/writers-writing-easy-adverbs-exclamation-points-especially-hooptedoodle.html This text has substantially resurfaced, courtesy of social media sites, subsequent to Leonard’s recent death at the age of 83.
2 ibid. Not only is the casualness an affectation, but I have just broken rule number four, “Never use an adverb to modify a verb.”
3 From Conrad’s 1911 novel, Under Western Eyes.
4 “Hooptedoodle”. See Leonard on Steinbeck: ibid no.1
5 Particularly when magazines, Blouinfineart and Modern Painters, include; Shane McCarthy – words, sometimes, get in the way of meaning, in their selection of 100 Best Fall Shows. How things have changed, the combined power of art fairs and social media, scuppers revelation and expectation, equalizing the first show of a young artist with that of a retrospective of seasoned and acknowledged masters, before the show is even installed. Wook-wook!
6 Apparently:

Reality
1. The quality or state of being actual or true.
2. One, such as a person, an entity, or an event, that is actual.
3. The totality of all things possessing actuality, existence, or essence.
4. That which exists objectively and in fact.