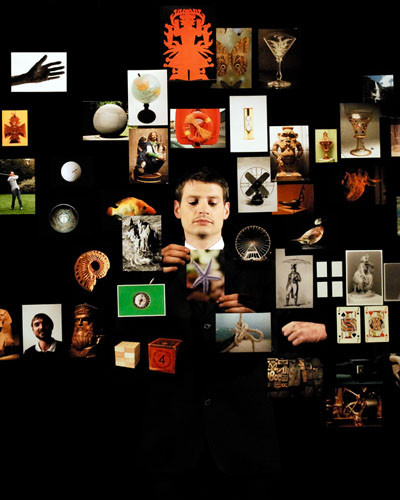 Motive Gallery is pleased to present 'Acknowledgement', the first solo exhibition in the Netherlands by Paris-based multi-disciplinary visual artist Aurélien Froment. On display during the show that will run from the 5th of April through the 10th of May 2008 will be the installations 'Who here listens (to) BBC News on Friday night?', 'Pour en finir avec la profondeur de champ', 'A short film about reading' and photographs from 'Instructions for a Victoria 8 projector' and 'Théâtre de poche'.
On Friday 9 May at 16:00, Froment will present his performance 'Théâtre de poche for Argument's Sake' (approx. 45’) at the Maison Descartes in Amsterdam.
Ever since he graduated from the fine arts academy of Nantes, Aurélien Froment (1976, FR) has been developing a series of interrelated multi-modal projects whereby he interrogates the manner in which media structure the relation between object and sign, perception and cognition, language and meaning. Central to his work are a few concepts such as 'text', 'process' and 'manipulation' which Froment coherently articulates around building a tension between absence and presence, signifier and signified, future and past. Further dramatized through a sober and conceptual aesthetic vocabulary, the impact of Froment’s work lays in its ability to evoke both a sense of loss and construction. For his exhibition 'Acknowledgement', Froment selected a series of works, which all in their own way tackle the issue of image manipulation and the importance of reference systems.
The installation 'Who here listens (to) BBC News on Friday night?'(2008) is a reflection on different systems of reference : tables of contents, Mendeleev’s periodical table and Friedrich Frœbel’s kindergarten table.
The installation 'Pour en finir avec la profondeur de champ'(2008) constitutes a metaphor for the relative nature of perception, being itself a device whereby the eye of the viewer is fooled. A two-dimensional world is also ironically materialized in the figures staged in the work : John Ford and Fritz Lang, both one-eyed and filmmakers.
The photographs from 'Théâtre de poche' (2007) and the series entitled 'Instructions for a Victoria 8 projector' (2007) gather some gestures that can be read as initiatory to the practice as well as to the process of the movement of images.
'A short film about reading' (2008) describes various relationships between a book and its reader. 'A short film about reading' is a coproduction between Parc Saint-Léger / Centre d’art contemporain in Pougues-les-eaux and Centre d’art Mira Phalaina / Maison populaire in Montreuil.
In his performance 'Théâtre de poche for Argument's Sake', Froment choreographs under the mechanical eye of a video camera a series of images referenced in the successive interviews with three professionals whose respective activities involve specific image manipulations. The performance 'Théâtre de poche for Argument's Sake' (approx. 45’) will take place Friday 9 May at the Maison Descartes in Amsterdam. Reservation is required: enter@motivegallery.nl
Works by Froment were to be seen at the exhibition 'Mercury in Retrograde' that took place in 2006 at the Apple in Amsterdam. Further, his work has been showed internationally at, among others, the Palais de Tokyo in Paris, the Project Arts Centre in Dublin and 220 jours in Paris. Later this year a solo show at the FRAC Reims will follow.
www.motivegallery.nl