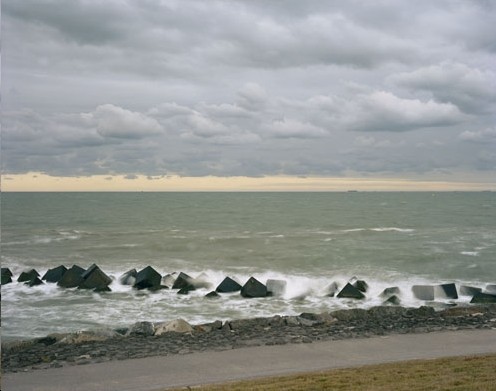 About 2000 hectares of land is being reclaimed from the sea off the coast of Rotterdam. This is where the second Maasvlakte must take shape. Since the construction of the Delta Works and the draining of the Zuiderzee by which the province of Flevoland was created we have gotten used to large-scale man-made landscapes. But if you stop and think about it, artificial creation of natural beauty remains a peculiar concept – not to mention a bizarre phenomenon.
In the summer of 2007 the photographer Dorothée Meyer (Cologne, 1973) recorded that part of the Maasvlakte which will be altered most by the coming construction activities. Motive Gallery is showing a selection of the photographs which resulted from this project, seen earlier this year in the Nederlands Fotomuseum ('A last look', February 17 through March 2, 2008), and was well received on that occasion. One is particularly struck by the serenity of Meyer's images. You could imagine yourself in an unspoilt place, a bygone era. Is this 'idyll' going to become the dynamic and economically important Maasvlakte 2?

Meyer's photographs are characterized by the unusual angles from which they are taken. For instance, 'Yokus Mahalleler' (2007) was dominated by a bird's-eye perspective, which transformed Turkish neighbourhoods into lively, richly varied and extremely precise visual patterns of roofs, façades and streets. In an earlier series the angle chosen, combined with the framing, resulted in a surprising new Dutch phenomenon: ridges of hills became mountain ranges (“Dutch Mountains” (2005)). Taken from high vantage points, the images offer an unusual, sometimes unprecedentedly enchanting view of the environment – but without, however, Meyer ever entirely losing sight of the objective documentation of the Dutch landscape.
More even than the place, in her photo images (and particularly in 'Before comes first, then comes later' – the title comes from a poem that Peter de Groot wrote for the book that accompanied 'A last look') Meyer interrogates the relation between the viewer and time. This is partly due to her way of working. Meyer photographs with a view camera, which is labour intensive and time-consuming. She waits for just the right light conditions, for just the right moment. The exposure time is long. As a result, details that normally go unseen strike the eye, while others disappear. In her recent images tranquility, stillness and emptiness contrast emphatically with the wind, tumult and activity off the coast at Rotterdam. Cargo ships, which in the future will come and go with still greater frequency, have not quite arrived yet, or have already passed. No sign of commerce and progress is to be found. Time stands still here. Or have the hands of the clock been turned back? You are looking at a 17th century seascape.

GPS coordinates, a contemporary variant of the notations about time and place that were used by the conceptual artists in the 1960s, form the titles of each of the separate works here. They refer to the future, according to Meyer, but at the same time are an anonymous code that can be read by – and that applies to – everyone. 'Before comes first, then comes later' invites the viewer to consider his or her personal stance: which course will you take? Where do you stand with regard to the landscape, present and future, with regard to the image with which Dorothée Meyer presents you in Motive Gallery?
www.motivegallery.nl