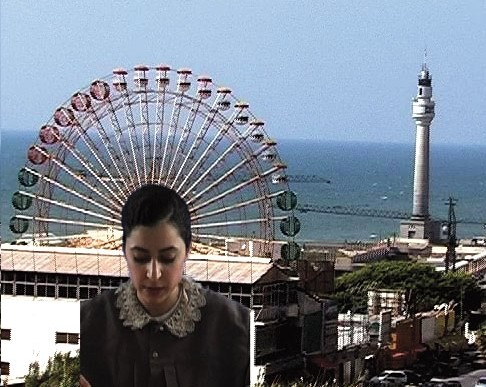 ‘The Sea is a Stereo’ poetically seeks to address the relation of men to their environment by questioning such dichotomies as nature versus culture, the Other versus the Same, and the importance of media in shaping these very ideas. Constant in the work of all three artists is the search for a definition of identity that transcends notions of social and geopolitical border, ethnic- and gender-bound givens by way of playing with the expressive means of the chosen medium of expression in an always playful and seemingly candid manner.
Motive Gallery is pleased to present 'The Sea is a Stereo', an exhibition of video and installation works by three young and upcoming artists Eléonore de Montesquiou, Mounira Al Solh and Tintin Wulia. The Sea is a Stereo will open on Saturday the 12th of January 2008 and will run until the 17th of February 2008.

The curatorial project’s name, 'The Sea is a Stereo', is borrowed from Mounira Al Solh’s end project at the Rijksakademie, which owed her the Uriôt prize 2007. Yet, it is also a metaphor for the current underlying the endeavour of all three artists featured in the exhibition. The Sea is a Stereo poetically seeks to address the relation of men to their environment by questioning such dichotomies as nature and culture, the Same and the Other, and the importance of media in shaping these very ideas. Constant in the work of all three artists is the search for a definition of identity that transcends notions of social and geopolitical border, ethnic- and gender-bound givens by ways of playing with the expressive means of the chosen medium of expression itself in an always playful and seemingly candid way. Highly autobiographical yet universal, all works showcased in 'The Sea is a Stereo' are invitations to acknowledge the ever-fluctuating nature of identity and the importance of its re-presentation.

The work of Franco-Estonian artist Eléonore de Montesquiou (1970, Paris, France) revolves around the articulation between private and official histories, personal and national identities. It tackles the intricacies and ambiguities of living in the margins, be it in a metaphoric or literal way. Based on her personal experience of uprootedness, Eléonore de Montesquiou inquires into the experiences and stories of individuals and communities who live in border areas, urban intervals and forgotten cities. Primarily working with video, she tapes testimonies, creating prosthetic memories of repressed histories. In these documentary-informed works, her camera becomes the voice of these voiceless people. Showcased in 'The Sea is a Stereo' is a video work of a slightly different character. 'Televisão' constitutes an example of more poetic works thanks to which Eléonore de Montesquiou seeks to deal with a feeling and portray an emotion. Shot in the countryside of Brazil, 'Televisão' features children watching their favourite soap opera. The camera, placed next to the TV set, captures their bewitched gaze and becomes a metaphor of the uncanny atmosphere that results from their wilful rapture.

Originally trained as a painter at the Fine Arts Academy in Beirut, Mounira Al Solh (1978, Beirut, Lebanon) soon turned to video and installation as she moved to the Netherlands and studied at the Rietveld Academy. Enrolled as an artist in residency at the Rijksakademie last year, her works have already been exhibited at MAMA in Rotterdam and in the Lebanese pavilion at the Venice Biennale. In the exhibition The Sea is a Stereo, she presents three video works and two sculptures out of the nine items that constituted the original and eponymous installation presented this last November during the Open Studio days at the Rijksakademie. These nine items formed what she called the different possibilities or options the shape of which could take the working-out of her project. These nine items were therefore variations on a same theme called 'The Sea is a Stereo'. In 'Possibility number 4', she holds interview with men on the seashore in Beirut and gives them her own voice. In 'Possibility number 5', she holds a lecture reading from the magazine Metropolis M in which it was published a few months ago. In this lecture, she reflects on the concept of 'Threshold'. 'Possibility number 9' is the filmed post-it inventory of all nine possibilities. With these video’s she prolongs and implements on her earlier works in which she comments on the mode of confessions on different aspects of her identity, being a Lebanese woman, artist, immigrant and faced with the political and military instabilities of her home-country. Mounira Al Solh’s work is characterized by a style that combines introspection, narrativity and constant play between reality and fiction, all of which is treated in a playful and seemingly candid way.

Asked to produce a 50-words bio, here is what Tintin Wulia (1972, Denpasar, Indonesia) wrote on her weblog: 'Artist and filmmaker Tintin Wulia was born in Bali, brought up in a music school, and trained as architect and composer in Indonesia and the USA. Her works have been screened, broadcasted, exhibited, and collected internationally. At present she is doing her Fine Art research at RMIT University, Melbourne, Australia.' Having finished the assignment, she muses: 'Now. That could have been all cooked up. How could you tell?' Both the life and works of Tintin Wulia read as a constant flux of cultures, places and influences to the point of which it challenges notions of truthfulness and authenticity. Based on an interdisciplinary curriculum, Wulia creates subtle videos in which recorded images, highly crafted scale models and other hand-made props are choreographed to the beat of music and sounds to speak about such themes as (preferred) identity, migration and cosmopolitanism. In the mode of animated films, Wulia’s moving collages evolve on the screen as narratives that stake out subjects paramount to our times in the most charming and playful way. Show-cased in 'The Sea is a Stereo' is her new video work 'How The World Began', a series of interviews presented in the mode of a moving collage with split screens, cut-out puppets and stories enacted by moving hands all of which tackle issue such as cultures and transnational citizenship. Also of primary importance in this work is the soundscape, which constitutes a counter-point to the images. Speech has turned to growls and grunts and language into some new undecipherable dialect. Few words only remain understandable that Wulia uses to trace a poetic and evocative semantic map of a world to be born again.
www.motivegallery.nl