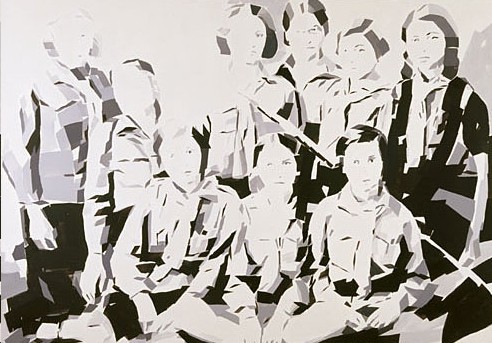 Motive Gallery is pleased to welcome you to its booth (A19) this year for the second time at the FIAC that will take place from the 17th till the 22nd of October in the Cour Carrée du Louvre in Paris.
This year at the FIAC, Motive Gallery has the pleasure to present a selection of works by Dutch photographers Viviane Sassen and Martine Stig, sculptures by the Anglo-Argentinean artist-couple Lucy and Jorge Orta, and paintings by Dutch artist Marjolein Rothman.

Since 2002, Viviane Sassen has been travelling throughout Africa and has brought back hybrid photographs rooted in the traditions of both fashion and documentary photography. Thanks to compositions that challenge the indexical nature of the photographic medium, Sassen elaborates a discourse on the African Other and the impossibility of capturing his or her identity in its full complexity and riches. In this way, Sassen’s work seeks to fuel the present debates over both the theory of photography and the representation of ethnicity. This year at FIAC, she will present works from the series 'Ultra Violet'(2007), which she shot in Ghana and for which she won the first place in the prestigious Prix de Rome.

Meanwhile, Martine Stig presents photographs from her series 'D.P.R.K'(2002) shot in North Korea. Central to Martine Stig’s artistic endeavour is the question of the identity politics of photography – and by extension of the gaze itself. In her varied series, she has investigated and challenged the common idea that to see is to know, also known as 'immediate cognition'. The works from her 'D.P.R.K' series presented during the FIAC result from taking photographs of relevant North Korean monuments according to their official imagery. Against all expectations, instead of appearing as cliché images, Stig’s photographs unveil their staged dimension. Her 'D.P.R.K' series constitutes a successful attempt at deconstructing the Democratic People’s Republic of Korea’s politics of national representation.

For their part, Lucy and Jorge Orta have selected several sculptures from their latest artistic and humanitarian project, 'Fallujah'(2007). Thanks to these ritual and multi-functional objects, the artist-couple intends to draw attention to the true circumstances of the siege of Fallujah during the Iraq invasion by the American and Allied troops. With this new endeavour, they attempt at providing a counter-memory of the Siege of Fallujah – one that draws attention to its atrocities and the role of the media in shaping its official history.
www.motivegallery.nl