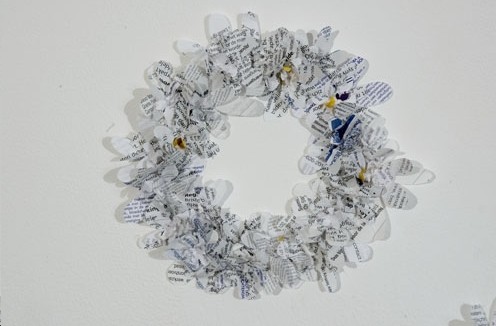 Hard Candies' is the first of two thematic group exhibitions curated respectively around the colours pink and blue.

Every colour has its specific cultural, social and political history. Just as a scent or a form, a colour mirrors specific customs and manners, ideas and interests, values and norms. And in today’s society, what is the range of shifting meanings attributed to pink? What does it stand for? As its title suggests the curatorial project 'Hard Candies' is not only informed by the positive attributes associated with pink such as sweetness and youth, but also and to the same extent by more ambiguous aspects of its contemporary significance. 'Hard Candies' stakes out the cutting edge of pink.

In his drawings, installations and videos, Brazilian-born, Amsterdam-based artist Célio Braga (1965, Guimarânia) explores the relation between body, memory, illness and death. Schooled as a jewellery maker, his approach to art is informed by exquisite craftsmanship and a keen eye for details. Primarily influenced by the work of Felix Gonzalez-Torres, Braga creates jewels - better described as miniature sculptures - the shape of which simulate organic and mineral matter that call up a myriad of associations ranging from under-water landscapes to visceral organs and cancerous growths. In this exhibition he presents works from his latest series, 'Gerry' (2006-2007) and 'Placebo' (2007). Whereas for 'Gerry', Braga appropriated stills from the Gus van Sant eponymous feature in order to speak about the relation between intimacy, mimicry and contamination; his series 'Placebo', of delicate paper flowers, crosses and funeral wreathes made out of cut-up medicine notices, constitute memento mori, an homage to those fallen of AIDS. Both these series tackle the flip side of eroticism and gay culture most often associated with the colour pink today; and take up again Braga’s interest in the connection between religion, art and science.

Over the past few years, Claudie de Cleen (1968, Zaandam, NL) has come to prominence with her drawings. Whereas her work is seen regularly in the mainstream press, it has also been acclaimed in specialized publications. Working with different styles, her light and seemingly casual stroke of pencil has become the hallmark of her graphic language. Coupled with sharp one-liners, her loose black and white (pencil) or (water-)colour illustrations constitute biting critiques on contemporary society. Never quite sweet, her portraits of teenage girls both endear and provide a sense of uneasiness.

The colourful installations by Fransje Killaars (1959, Maastricht, NL) conflate the western tradition of abstract and conceptual art (Colour Field painting and Sol LeWitt’s Wall Drawing) with that of Indian weaving. Bringing together Orient and Occident, high - and applied art, Killaars’ work has been described as a unique attempt at merging different practices, worlds and aesthetic categories that allow her work to be read as critiques of traditional gender, ethnic and social divisions. To be seen in 'Hard Candies' is an example of her recent endeavour at 'draping some of her bedspreads, with their brightly coloured grids, on tailor’s dummies.' And as Sven Lütticken further writes: 'These abstract and impractical full-body veils draw attention to their materiality and sensuality – to their own surface and texture rather than their status as obstructions of the gaze...' As a reflection on the instrumentalization of the veil as propaganda both in the Muslim and in the Western world, it articulates the gender associations of the colour pink (femininity as what is concealed) with politics and religion in the contemporary debate of Enlightment versus Muslim culture.

Dutch photographer and winner of the Prix de Rome 2007, Viviane Sassen (1972, Amsterdam, NL) has been dedicated for a long time to the gender politics of the gaze. In different early editorial and non-commissioned work, she has pictured women’s bodies and sexuality in a highly personal way. As Viviane Sassen comments in an interview:
[this is a] 'work that is about women and their status in society. Maybe it had something to do with the power of women to expose their own bodies both in a conscious and ironic way. And there is also the question of me being a woman and the photographer. At that time, when I took these pictures, I was influenced by male photographers, who took pictures of women like Helmut Newton and Araki, and also I was assisting the Dutch photographer Carli Hermes. On top of that, I was myself being photographed as a model by numerous male photographers who wanted to depict me as a sexual object. Maybe I had the feeling that I had to empower myself, to put something next to these male visions of women but still using their own visual language.'
Rarely seen works from her early erotic series will appear at 'Hard Candies', providing new insights into the oeuvre of whom has mostly become known through her artistic work in Africa. From her series for 'Realm', her nymphs sitting in the woods or running in the sand aren’t so much alluring as they are homely and spontaneous. Viviane Sassen depicts women and their sexuality in a way that turns pink into a colour that denotes ambiguity and self-empowerment, rather than submissive sweetness.

Artist Luuk Wilmering (1957, Haarlem, NL) is mostly known for his large-scale (hand-coloured) photographic self-portraits. His work is as indebted to pop art as it is to Belgian Surrealism. For Wilmering, everyday life is an inexhaustible source of wonder; it is both pathetic and poetic, magic and absurd. Ironic and self-critical, Wilmering’s work constitutes an uncompromised vision of ordinary living, whereby social gatherings, individual obsessions and common gestures become the mark of his dissecting eye. During 'Hard Candies', he has chosen to present 'Welcome to the party', a billboard-size photograph highlighting the fragility of happiness and the absurdity of its calculated occurrence embodied in the social occasion of a birthday party. In Wilmering’s photograph, the usual pink glazed cake has been replaced by the sour taste of human failure. [Catherine Somzé]
www.motivegallery.nl