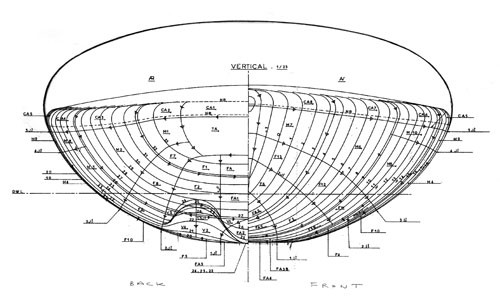 In March of this year, fifty brightly coloured dome tents landed on the white ice caps of Antarctica. The intervention was carried out by Lucy + Jorge Orta and film of it, together with drawings and wall sculptures, as well as survival kits that were made later but refer to the action, are now on show at Motive Gallery. The exhibition provides a glimpse of the visual impact of the impressive expedition. But, even more, the presentation reveals that the symbolic implications of the intervention have not lost any strength outside the boundaries of the distant South Pole region.
The tents, assembled from the flags of different countries, pieces of clothing and gloves that, through the extended cuffs, have become 'helping hands', are part of 'Antarctic Village - No Borders', an ongoing project that was first shown under the auspices of the 'First Biennale of the End of the World' ('Primera Bienal del Fin del Mundo', Ushuaia City, Tierra del Fuego, Argentina, 2007). The mobile architectural structures provided metaphorical shelter for the ever-growing number of refugees worldwide resulting from wars, natural disasters, economic problems and religious and social persecution. For the unremitting stream of migrants who are denied social and political rights. Studio Orta has declared Antarctica, the furthest point of the world, as their refuge.
Besides the dome tents, they planted a flag in which different national symbols are merged together ('Métisse Flag'). Studio Orta also designed a passport for the 'nation without borders' ('Antarctica World Passport'), and organised a football match between Argentineans and Britons to mark the twenty-fifth anniversary of the Falklands War between Argentina and Britain. Both teams wore shirts bearing their 'own' flag on the front and that of ‘the other’ on the back. This meant that the players were well nigh interchangeable. Spectators, too, are confronted with the fact that the players are not recognisable by random factors like the colour of a shirt or the symbol of a sovereign nation ('Heads or Tails vs. Tails or Heads').
As part of 'Antarctic Village - No Borders'. Lucy + Jorge Orta advocate adding an amendment to the constitution (clause 13.3), stipulating that every individual should be allowed to move freely in the same way as goods and economic services. Through the intervention of 'Antarctic Village - No Borders', the line separating 'here' and 'there' in the geographically and politically extreme territory that the South Pole still is, disappeared - for a moment or for longer?
Louis De Cordier’s 'Blob' refers, as does Studio Orta’s 'Antarctic Village - No Borders', to a possible future. In Motive Gallery he is showing the maquette and drawings for an architectural installation grafted onto human measurements, which will one day be realised. Formally, the organic 'Blob' is inspired by the partition of nuts and seeds, as well as by the method of building ships, particularly the mythical Noah’s Ark with its assurance of the continuation of cultures. The 'Blob' is a vessel intended to sail on the warm Gulf Stream. This ± 10,000 kilometre long stream, a 'river' in the sea between North America and Spitsbergen, regulates the world's warm and cold currents, the basis of our climate and its changes. The Gulf Stream carries a burden of history: the last ice age, when ice advanced as far as the Pyrenees, was mainly caused by the Gulf Stream coming to a standstill. In the last fifteen years the speed of the stream has decreased by more than 30%. Is there a new ice age on the way? Scientists are trying to find out the reasons for the slow-down but for the time being they are in the dark.
De Cordier's Mataha expedition has in the meantime become famous and sensational. This is an ongoing total project in which, with the help of archaeologists, he is excavating the lost labyrinth of Hawara in Egypt. This year it has already provided the scientific world with new insights, gradually rewriting history. The young Belgian artist does not have such intentions with the 'Blob'. But the fragile-looking model goes further than its own materiality. The 'Blob' is a mental structure that embodies other worlds in itself, the same as an Ark. As such, the work injects the air bubble in which we live today with an 'other' reality consisting of history and dreams. 'Man, and the artist too, rarely looks 150 years ahead', says De Cordier. The 'Blob' is a visionary project that conjures up an image of the future. But you never know with Louis De Cordier, as was evident from the Mataha project. Zones that we imagine to be inaccessible suddenly turn out to be 'amazingly' close. [IvR]
www.motivegallery.nl