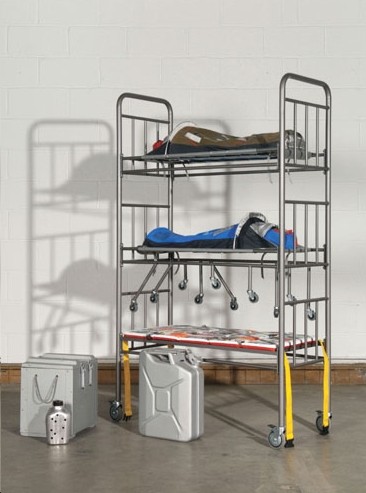 Warfare and its after-effects have always underlain the artistic endeavours of Paris-based artists-duo Lucy and Jorge Orta. 'Fallujah', one of their latest projects, borrows its name from the Iraqi city, which in 2003 came to epitomize the violent fate of humanity in the face of military omnipotence - in this case, that of American and allied powers during the invasion of Iraq. In the installation especially designed for Motive Gallery to present at the International Fair Art Forum Berlin, Lucy and Jorge Orta gather varied sculptures and wall drawings that form part of their attempt at providing a counter-memory of the Siege of Fallujah – one that draws attention towards its atrocities and the role of the media in shaping its official history.

Since the foundation of Studio-Orta in 1991, Lucy and Jorge Orta have been committed to a socially engaged art practice aimed at tackling issues paramount to our times. Displacement, nomadism and homelessness are but a few of the phenomena to which their series of multi-modal projects have responded through the creation of poetic artifacts and the organization of events, workshops and performances. In accordance with their cross-disciplinary approach of art making, 'Fallujah' was preceded in 2004 by their peace intervention at the Victoria and Albert Museum in London involving 50 volunteers wearing specially printed gold-leafed combat suits, crystallized in a collaboration with writer Jonathan Holmes and music composer Nitin Sawhney. Holmes' documentary theatre play, staging eyewitness testimonies from Iraq's besieged city, ran throughout the whole month of May in London. For the occasion, Lucy and Jorge Orta turned The Old Truman Brewery into the site of one of their art installations . Whereas it functioned as a set during the evening performances, it was open to the public by day as an art exhibition.
As is the case with most of Lucy and Jorge Orta's projects, 'Fallujah' is open-ended, and continues to evolve. Adaptable to different contexts, it presents itself as a module-based piece, the size, extent and constitutive elements of which vary at will. In accordance with the formal language that has become the hallmark of Orta-Studio, 'Fallujah' has developed from appropriating and staging prototypical designs found among others in the sanitary and military realms. Conceptualized around the idea of 'surplus' – characteristic of both war efforts and their sensationalistic media coverage 'Fallujah' features works based on the concept of seriality embodied in sculptures assembled from countless exemplars of identical items, such as shoes and microphones. Conscientiously manufactured and displayed, these hybrid objects draw from a variety of realms, while laying bare the hidden relations that exist between dissimilar spheres of theory and practice. Highly evocative, they project both an apocalyptic and resourceful future. They challenge us to reflect upon how – and why — we choose to fight.
www.motivegallery.nl