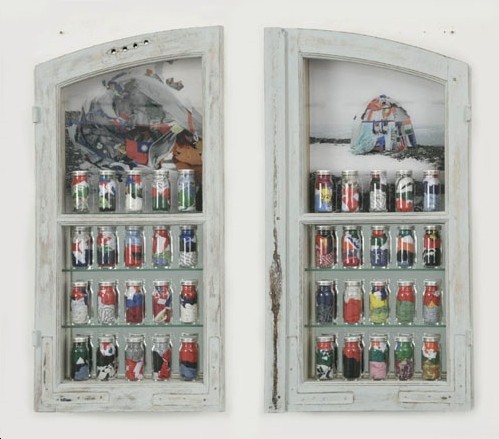 Motive Gallery is pleased to present a second solo exhibition by the Anglo-Argentine artist duo Lucy and Jorge Orta. The show that will run from the 23th of February through the 29th of March 2008 will include a selection of drawings, sculptures and installation works from two of their latest projects, 'Antarctic Village – No Borders' (2007) and 'Fallujah' (2007).

Since they founded Studio Orta in 1991, Lucy and Jorge Orta have initiated a significant number of projects that have taken the shape of different, yet interrelated, poetic artefacts, events, performances and workshops. Sampled from dissimilar worlds as that of, for instance, the clothing industry, the realm of emergency management and eco-tourism, most of Orta’s works present themselves as hybrid and modular architectures speaking in one way or another about issues paramount to our times such as homelessness, nomadism and mass migration. Whether the accent lies on the outcome of a war or on the utopia of a borderless world, Orta’s many projects relate to each other, as do the many threads within the tight web of a broader scheme.

'Antarctic Village – No Borders' (2007) was an ephemeral installation in the guise of a temporary encampment of 50 dome dwellings, hand stitched with nation flags, fragments of clothing, webbing and silkscreen print. Declared 'land of investigation' in 1959 whereby all military activities were prohibited, Antarctic constitutes a kind of untouched land frozen in white snow – a place where the utopia of a borderless world seems real. In order to draw attention to the current climate of migration and the refugee status in which many people throughout the world find themselves, the 'Antarctic Village' was conceived as a symbol of the plight of those struggling to transverse borders and to gain the freedom of movement necessary to escape political and social conflict. Commissioned by 'The End of the World Biennial', this project aimed to reflect on a free zone for the populations of different ethnic groups and sought to address the urgent need to amend Article 13 of the declaration so that freedom of movement is also recognized as a universal right.

The project 'Fallujah' (2007) borrows its name from the Iraqi city, which in 2003 came to epitomize the violent fate of humanity in the face of military omnipotence –in this case, that of American and allied powers during the invasion of Iraq. Initiated as a peace intervention in 2004 at the Victoria and Albert Museum in London the project 'Fallujah' further crystallized in the design of sets for Jonathan Holmes’ theater play of the same name, staging eyewitness testimonies from Fallujah, which ran throughout the whole month of May 2007 in London. For the occasion, Lucy and Jorge Orta had turned The Old Truman Brewery into the site of one of their art installations, which functioned as a set during the evening performances, while being open to the public by day. In their own way and in collaboration with each other, both Studio Orta and Jonathan Holmes sought to provide a counter-memory of the Siege of Fallujah – one that draws attention towards its atrocities and the role of the media in shaping its official history.
www.motivegallery.nl