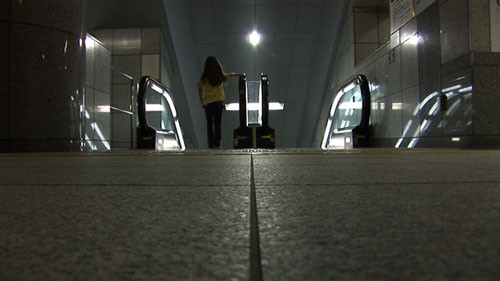 Shot on the streets of Tokyo, 'Suto-ri-' (20’02") is the first video project by Dutch photographer Martine Stig (1972, Amsterdam). Awarded a three months residency in Tokyo, she went strolling the Japanese metropolis capturing everyday scenes with her hand-held video camera in the mode of a candid photographer. She then edited chosen fragments so as to intimate narrative continuity while remaining fundamentally open-ended. The flow of Stig’s images emulates the fragmented vision inherent to living in a metropolitan environment; it unfolds as a poetic ode to modernity and its way of seeing.
Whereas Stig started this project as an experiment on the possibility of creating a mainstream feature on the basis of materials shot in a documentary fashion without actors and without production assistance, 'Suto-ri-' transcends its initial aim. Unaware or careless of Stig’s camera lens, passers-by lend themselves to become the manifold doubles of main characters in Stig’s film. They keep performing private gestures and personal dramas, careless of their public surrounding. In this way, 'Suto-ri-' interrogates the divide between the individual and collectivity, between the private and the public realms.
Further, just as with her earlier photographic work from her series 'For Future Use' (1995) to 'Sisters' (2006) and her multimedia project 'Any Resemblance to Existing Persons is Purely Coincidental' (2006), 'Suto-ri-' questions the relation between image-making and meaning-making, and between perception and knowledge acquisition. By playing with codes of filmic narration, 'Suto-ri-' investigates the instinctual need of human beings to build up stories in order to make sense of the world—stories, which in their turn, have the power to shape the identity of those who formulate them.
In this way, 'Suto-ri-' can be understood as a kind of artificial memory, both collective and personal: that of Stig herself and that of the urban community she portrays. As usual in Stig’s oeuvre, the value of her work as document is superseded by a clear personal vision of philosophical dimension. Whereas 'Suto-ri-' can be read as a kind of inventory of contemporary manners in the public realm, each scene is a highly evocative and aesthetically successful vision. It is the work of a photographer interested in researching the identity politics of the gaze. It is altogether a critical, poetic and quasi-anthropologic piece of art. [CS)
www.motivegallery.nl