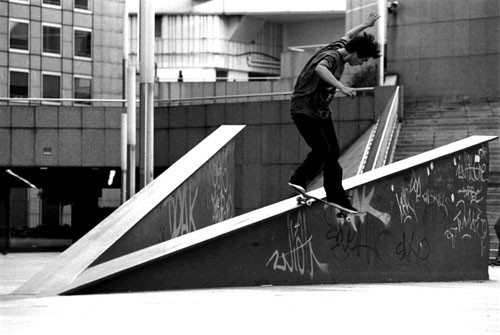 The skateboarders glide at top speed along the slopes, over the curves and the parallel surfaces in 'Riding Modern Art' (2005), a short film by the French artist Raphaël Zarka. The music accompanying the images emphasises the thrill and danger of each jump. The film seems to stand in sharp contrast to Zarka’s generally concentrated, almost muted conceptual works. Nothing is less true. Not only do the skateboarders transform the apparently abstract forms of the sculptures they ride across into dynamic platforms, but they also represent the idea that a work of art is not per se rooted in an artistic history but in another physical, intellectual or imaginary one. After all, does not the form of the piece of sculpture show an affinity with a naturally rolling wave? The sport of skateboarding arose at the instigation of surfers when there was a lack of wind, as Zarka relates in the book he wrote on the subject, 'La conjonction interdite. Notes sur le skateboard' (2007). The artist, himself a fervent skateboarder, did research into the history of his obsession and, in homage to the French philosopher Roger Callois and his 'diagonal' way of seeing, made a connection between art and sport. For Zarka, skateboarding is not in the least an arbitrary sport. 'Le skateboard a façonné le regard de ceux qui le pratiquent.' The skateboard has formed him as well as his way of seeing.
'Riding Modern Art' lies at the basis of, but also seals the synthesis between the two parts of Zarka’s first one-man show in the Netherlands. In 'Documentary Sculptures', he further elaborates the dialectic between photographs and objects on the one hand, while on the other he reveals his fascination for what he calls the 'mechanics of sculpture', or how sculptures relate to movement.
Into the first category fall his well-known 'Les Formes du Repos', photographs of 'sculptures involontaires', or sculptures that are not meant
as such. The objects photographed in 'Les Formes du Repos no 1' (2001), for example, are actually breakwaters that Zarka discovered on the coast near the French city of Sète. Seven years later he photographed them once again ('Rhombis, seven years later', 2008). The photographs reduce, deny or aestheticise the original functional and formal aspects of the objects. And vice versa: through the medium of the photograph the 'figurative' content of the ostensibly abstract sculptures is brought to the attention of the viewer in the gallery space. The suggestion is that, inherent in the found object, isolated by the photographic frame, there necessarily resides a story and a function that transcends the framing of the image.
Zarka investigates this relationship between the formal and informal aspects of an object, its history and eventual destination in a different way in his ‘replicas’. By means of reconstructions of the apparatus used by Galileo at the threshold of the scientific revolution to study movement, Zarka not only appropriates the forms, but also the moment at which experiments and observations and the instruments used for them became part of the scientific investigation. 'Tautochrone (réplique n° 3)' shows the cycloid, a mathematical form translated into an apparatus that not only helped to solve the brachistochrone1 problem, but also the one connected with the tautochrone2. With the aid of such apparatuses the gap is closed between the 'mondo sensibile', the world of observable and measurable phenomena, and the 'mondo di carta', the world of abstract knowledge from books. Needless to say, Zarka’s own artistic approach resonates in these early scientific instruments and the crucial moment that they incorporate.
Besides replicas, Zarka also makes 'reprises' or 'covers', as well as 'deductions' - new versions, derivations or translations, in the broad sense of the word, of earlier works of art, scientific instruments or parts thereof. These sculptures and photographs, in which Zarka concretises a type of translation, once again evince the essential importance for the artist of (different ways of) appropriating. In contrast to the postmodernists, who also made frequent use of this method, Zarka’s speculative montage 'Préfiguration de la collection des rhombis' (2008) is a critique neither of Luca Pacioli’s book Divine Proportion nor of the two figures, rhombis, that can be seen lying on this 16th century book. The work is much more a celebration of the moment at which the Renaissance is relived in the two recently discovered forms, which also play a role in Pacioli’s book. Or you could say that he is implicitly making a plea, in line with Caillois, for a 'poétique generalisée', in which physical, intellectual and imaginary worlds are inextricably connected with each other. The historical, scientific, natural or artistic context in which the 'cinq cercles' figure in the photograph of the same name (2007), or the 'Chladni' in the photograph of the instruments (2007) is of less interest, in Raphaël Zarka’s view. More interesting is the question of what remains of the forms and the instruments at the moment when they are divested of their temporal and spatial embeddedment. Meaning is generated each time anew and each time differently. [Ilse van Rijn]

1. A brachistochrone curve is the curve between two points that is covered in the least time by a frictionless body. Gravity is the only force that has an effect on the body.
2. Referring to the proof by experiment that the period needed by a ball to roll to and fro in the curve is independent of its starting point.
www.motivegallery.nl