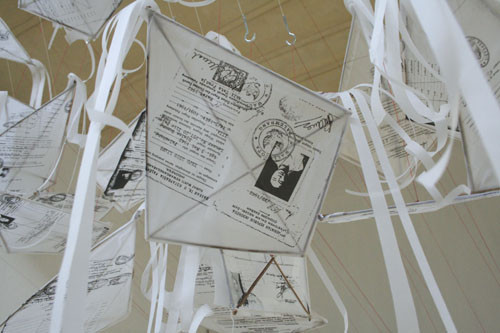 For almost ten years, Tintin Wulia has applied a manifold of strategies in exploring questions about spatial border and its relation to human identity. The well-traveled Indonesian artist of Chinese-descent was born in Bali with the name Maria Clementine Wulia on her birth certificate, but has been called Tintin since she was born. She seems to be predominantly inclined to exert herself on the issues of border and identity not merely as an effort to fulfill her intellectual interest, but also in search of possible answers to her persistent personal call. Tintin’s current artistic stance appears to aim at getting a better imagination about her ‘self’ in the midst of relations between her crisscrossing cultural genealogies and today’s global political order.
Considered a prodigy by her Indonesian artist peers, Tintin studied architecture and music, and has only recently started her fine art postgraduate research in a formal artistic institution. A multiple-perspective of investigation has characterized most of her video, short-film and installations, which are often meticulous, yet looks simple in its realization. Tintin’s works perfectly reflect her particular way of questioning: most of her works do not end up simply in clear conclusions. Often using the strategy of juxtaposition — for instance, between ‘the fake’ and ‘the real’, or ‘metaphor’ and ‘literal statements’ — her works are, to some degree, constructed to contradict assertions, or rather, to inject complex questions into the stereotyped mindsets.
The works that Tintin presents for this first solo exhibition consists of several installations resulting from her latest project, part of which developed during her residency in Yogyakarta, together with related video pieces that she created as precedents. As a whole, this is a show that probably would comprehensively reveal the artist’s focal concerns in the past decade. In her installation titled Invasion, Tintin explores the fragility and tension between the cultural and political identities, deriving from the complex history of her Chinese-descent family that had to carry on altering their cultural identity in consequence of the political shifts — both in the newly born, formerly colonized Indonesia and between the Soekarno and the Soeharto government.
The assemblage of red threads, razor blades, pots, magnets and self-made kites shows the artist’s particular sensibility in selecting, crafting, executing and transforming the daily, trivial, almost invisible materials into a strong artistic statement. Looking at the installation, we will find how the frail red threads that support the kites, and at the same time connects the kites and the pots, have to rely on the unpredictable external factors, such as wind and the strength of the magnets. This particular relationship between the objects inevitably suggests a situation of uncertainty.
Tintin’s intensive probing into the problems of identity may not emerge in the absence of the cultural and political problems that have prevalently encircled most of her life space, in Indonesia — or perhaps elsewhere in the world. Within the emergence of new global information order, the problems have seemed to become increasingly more complex. It is now her call not merely to reiterate her connection with her cultural ancestors, but also to negotiate her self-projection and identification amidst the presently drifting, unsettled world.

Agung Hujatnikajennong
Indonesian curator and critics, based in Bandung
www.motivegallery.nl