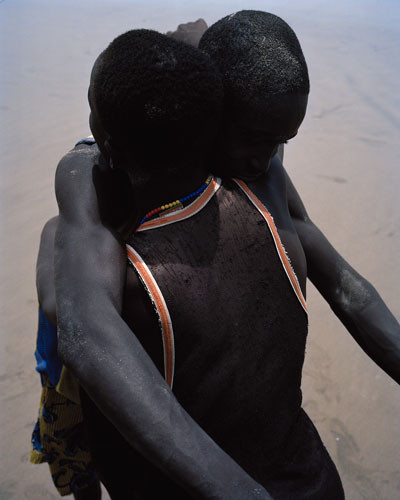 Viviane Sassen would rather have been black. It's a more pleasing skin colour, less naked. It's not her opinion, but a fact she observes. Those who are aware that Sassen lived in Kenya from the ages of two to five will understand what she means. Her earliest memories are connected to the polio clinic where her father worked and where she played with the patients. Viviane Sassen is in every way the opposite of the crippled African. She is tall - even by Dutch standards, has blond hair and a lily-white skin. Even as an infant she knew she was different, that there was an unbridgeable disparity between her and her friends.

An additional barrier has been added in the form of a camera. She has been portraying Africans since 2001. It started fairly documentary, in the South African townships, and gradually a plan for a book evolved. The work that Sassen has been made in Ghana for the Prix de Rome is also part of the ongoing Africa project with which, in her own words, she 'attempts to recreate the images of my youth.'

Her working method is intuitive. Sassen lets herself taken by the appearance or behaviour of people she encounters. Conversations follow and she endeavours to win their confidence by drawing. The camera comes into play at the very last. The final images - some staged, some spontaneous - are realised in collaboration with 'the model', always receives a print of the image afterwards.

The accountability Sassen feels towards her subject is not a feature of her commercial work. The photographer, who flunked out of fashion design, has had assignments for fashion names such as Diesel, So and Miu Miu. In the advertising setting, she is the executer, working to clear parameters. Or, as she puts it: 'It's putting the pieces together, entirely practical.' Nevertheless even her commercial work bears a distinctive Sassen signature. The photos look stylised but the models are no standard beauties. Moreover, their faces or even the clothes they advertise are only partially in shot. It is fashion photography with a twist, which is more about mood, feeling and mentality than clothes and make-up. In her autonomous work, this aspect of Sassen's work is magnified. The photographs of African street kids and people from the ghettoes are infused with an almost fashion-like aesthetic, which distinguishes them from usual images of Africa. These are no coarsely grained mirrors of misery, no sun-baked National Geographic pictures, no exotic icons of noble savages along the lines of Leni Riefenstahl's Nuba. They do not fit in the standard imagery idiom, with which they set the viewer thinking. What is my image of Africa, and why? Why do we always see the same images? How did paternalism and exotic creep into the Western eye, becoming embedded there?

Sassen is also affected by the political and moral dilemmas. Because who gives her the right to photograph African street kids? Isn't there a fundamental imbalance of power at work? Where does interest end and exploitation begin? Is Sassen projecting her own fantasies and if so, is that permissible?

These questions are deeply rooted in Sassen's choice of subject, composition and 'the story' that she tells with a complete series. But there is one element in her photos that goes straight to the heart of the matter: her play with shadow and contrast. Photographing Africans in the shadows is taboo. It renders them almost faceless. Associations with 'the dark continent' - dangerous, unknown, wild - surface. Even in Jungians psychology, the archetype of the shadow - the collection of a person's unconscious qualities - bodes ill.

But Sassen turns everything on its head. The shadow strikes back at the viewer, who wonders where all those prejudices come from. And at the photographer, who tries to leap over her own shadow.
www.motivegallery.nl