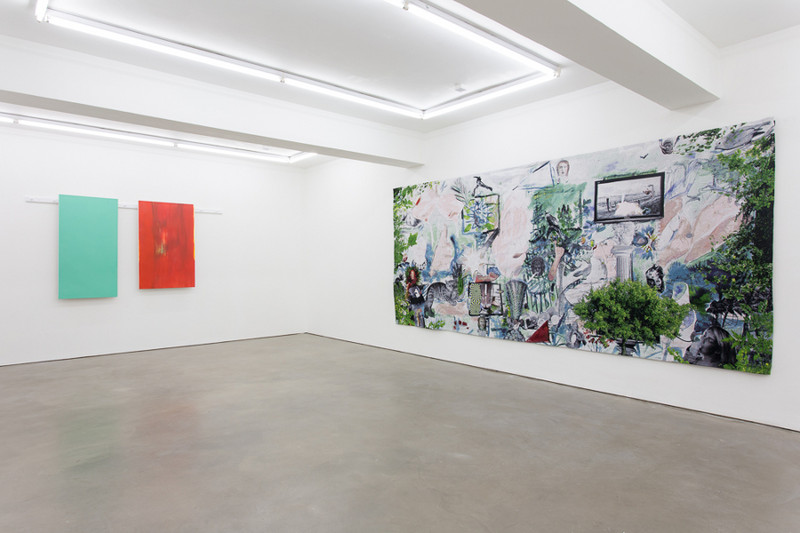 This group exhibition of rotating works showcases new and rarely exhibited pieces by Laure Prouvost, Dan Rees, Simon Mathers, Dennis Oppenheim and others.
Laure Prouvost’s new tapestry Swallow me, From Italy to Flander, a tapestry (2015) unites her use of collage and scenography to create an intricately woven visual narrative. The painting Woman Upsidedown (2011) depicts a naked woman hanging in the middle of an unclear landscape accompanied by an audio track in which her seductively broken English recounts a story of desire accompanied by a song by Elton John.

Simon Mathers’ paintings are characterised by simplicity of form and gesture. Depicting horses, cars and anonymous figures, his almost monochromatic paintings draw out gestural abstractions that place emphasis on the quality of the line. The exhibition also includes the new sculptures Lamps (2015).

Dan Rees’ on-going series Shaker Peg Paintings consist of monochromatic canvases hung on Shaker peg rails. Presented as individual elements, sequences or as an entire show, the abstract paintings can exist both on their own or as sculptural configurations in which each panel ties into the next.

Dennis Oppenheim was a pioneer of new sculptural thinking, using fireworks, flares and machines as sculptural materials. Drawing for Second Sight for a Staircase (From The Fireworks Series) (1981) illustrates his working process and is a key example of how he used drawing within his practice to further expand his concepts.
www.motinternational.com