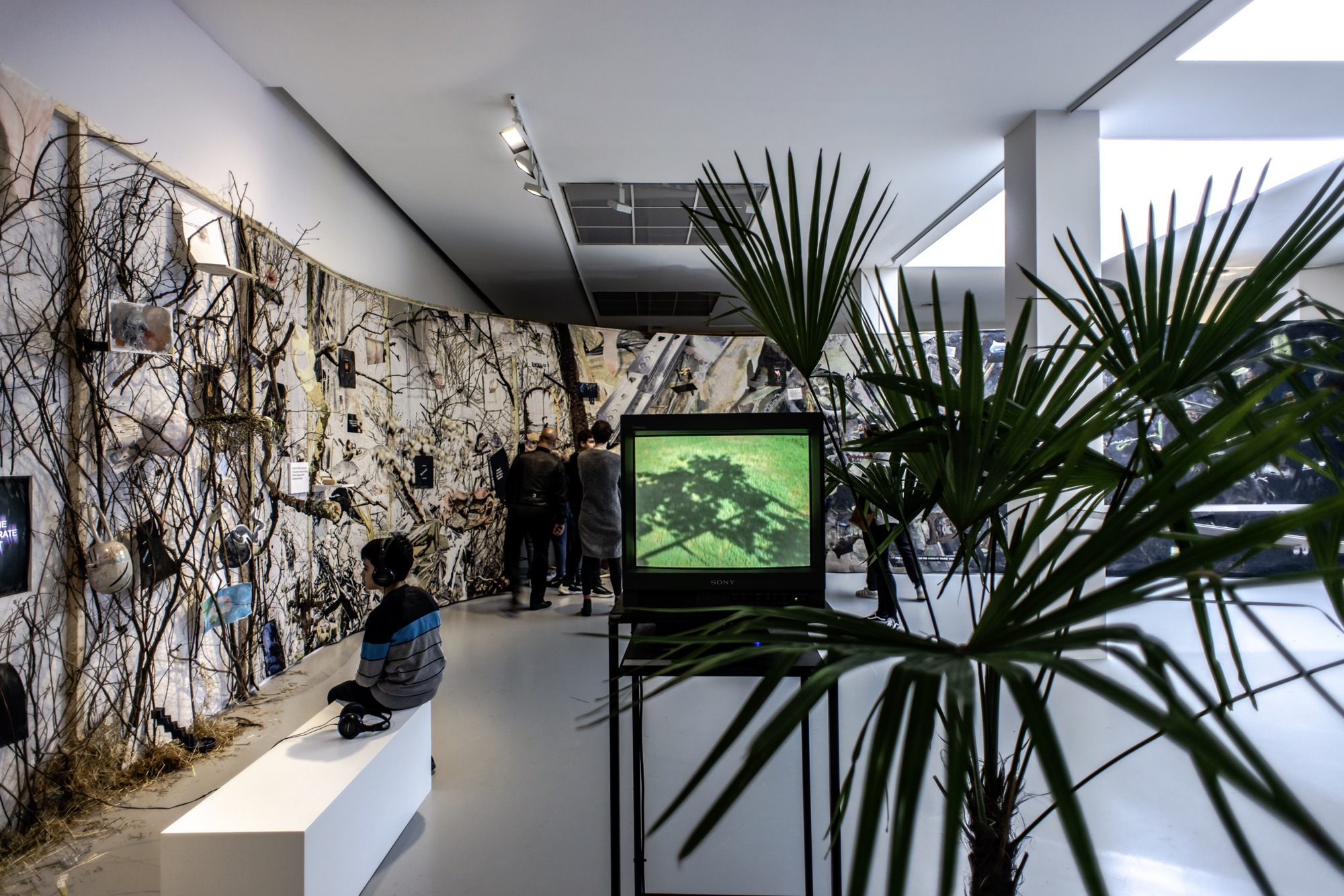 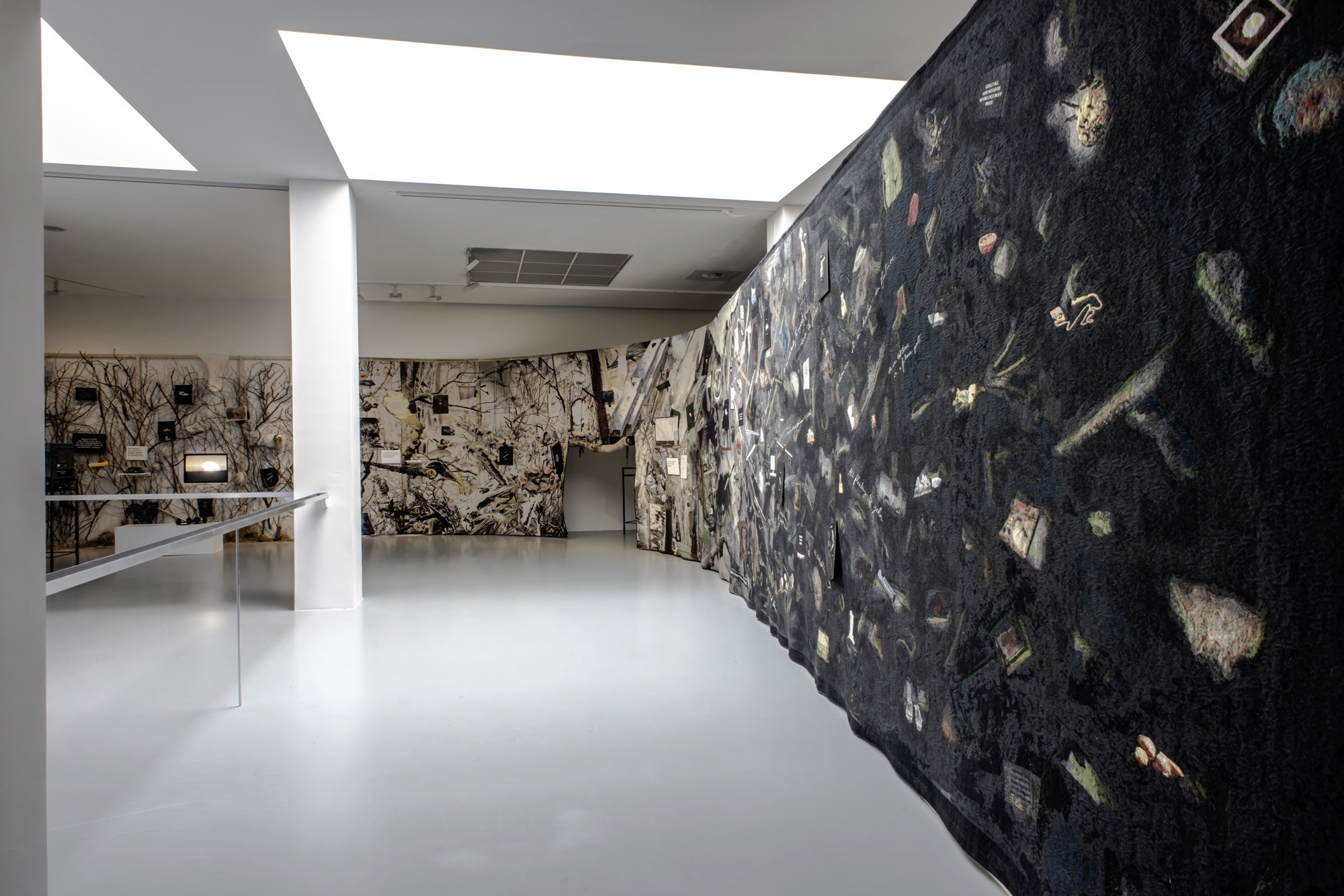 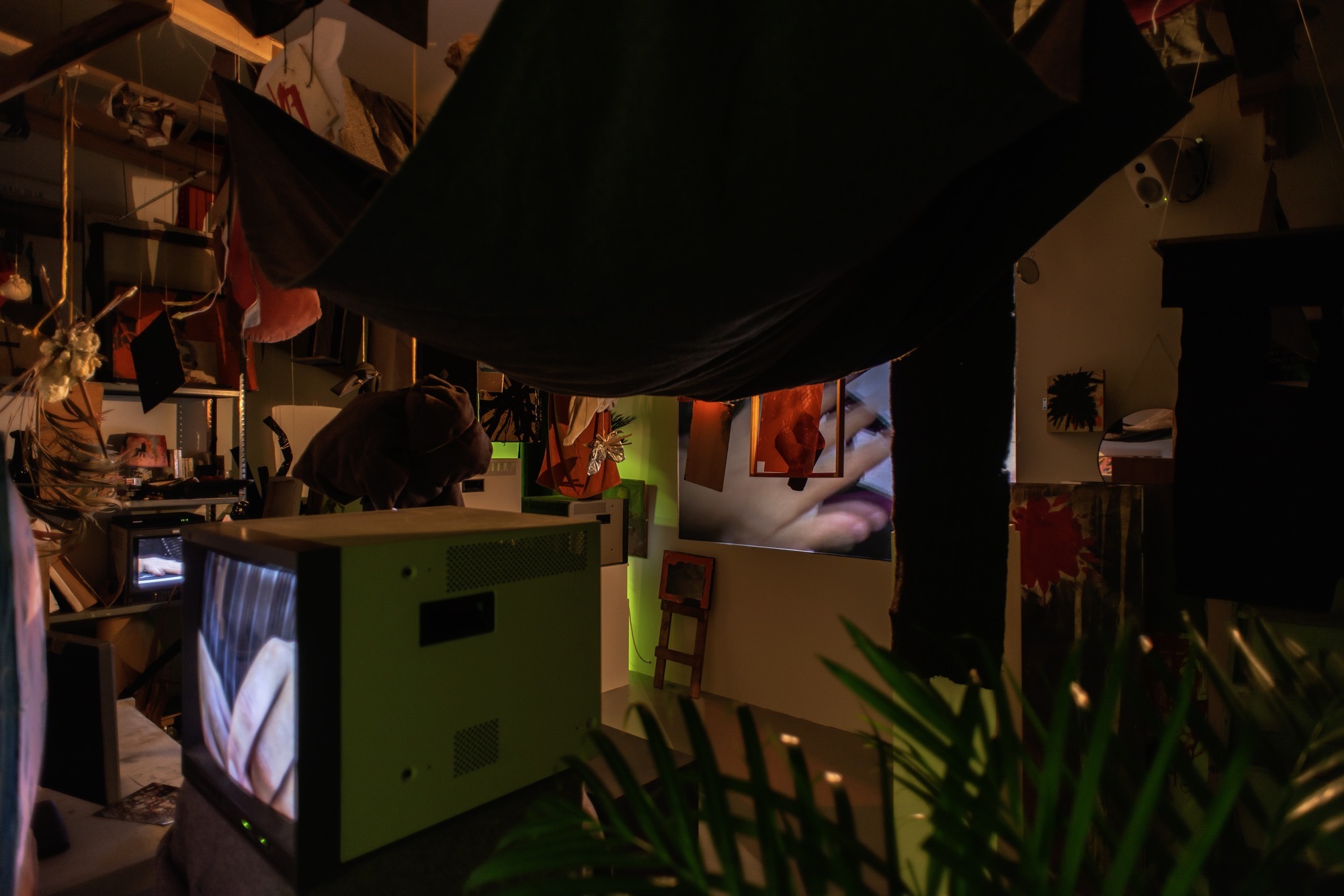 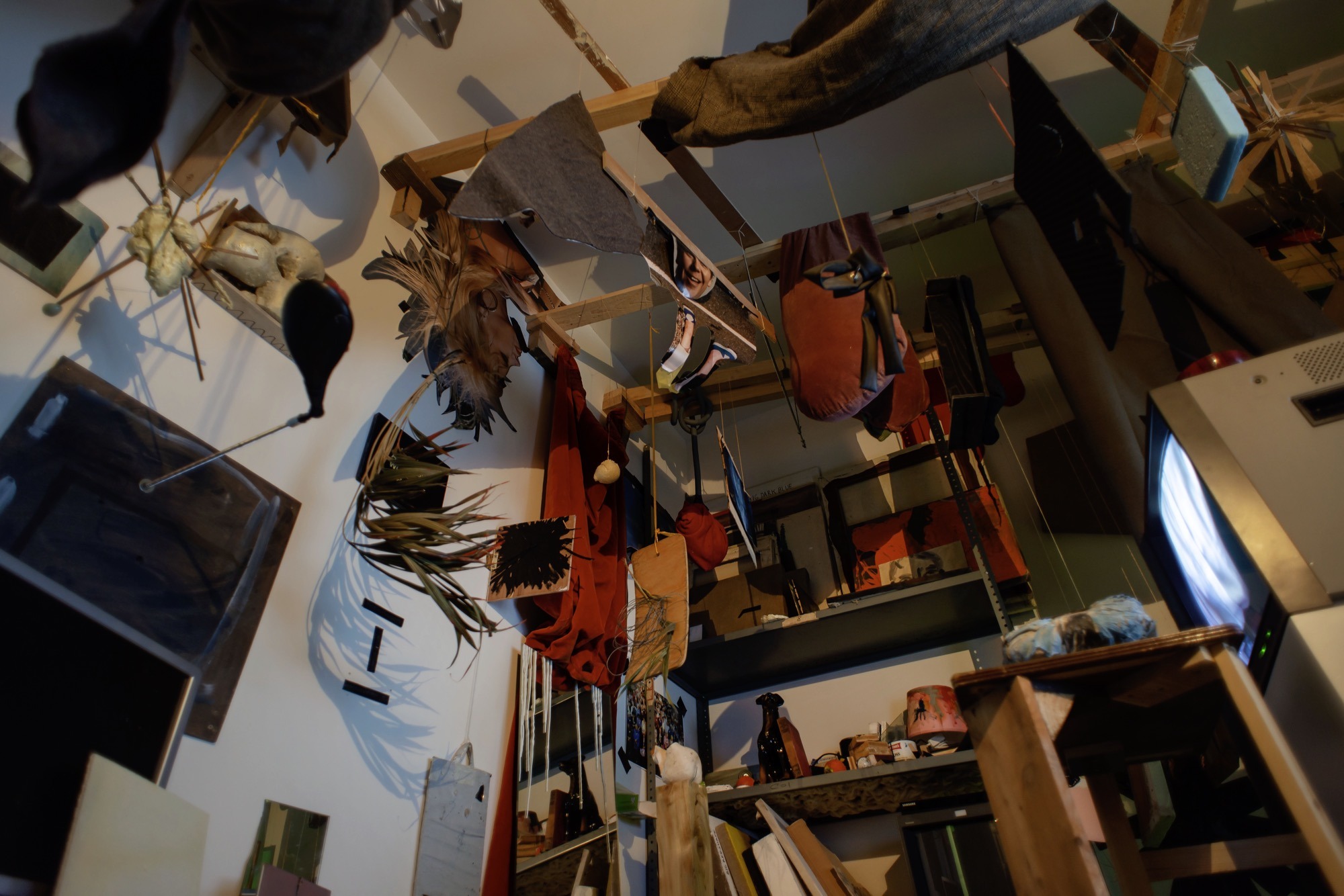 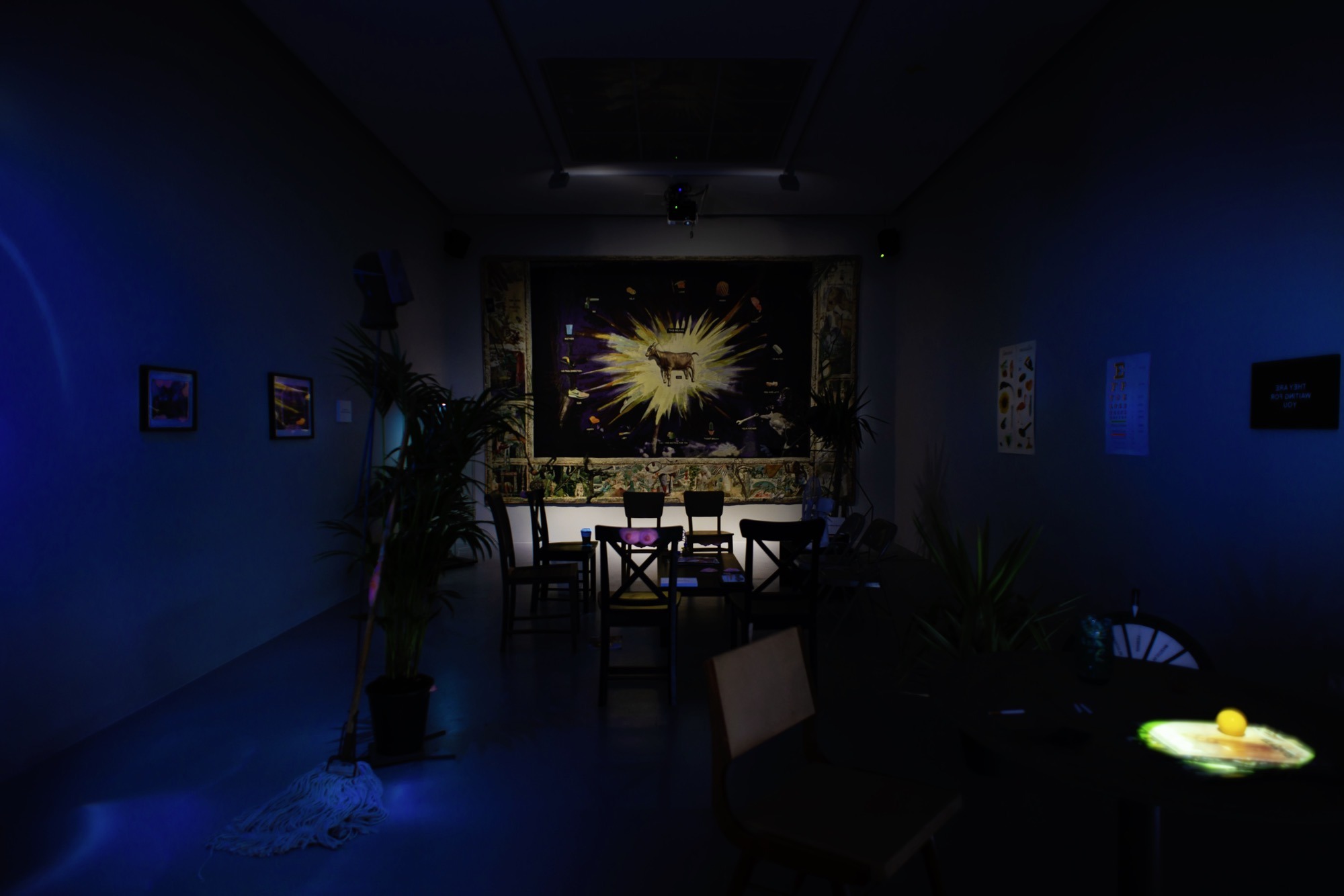 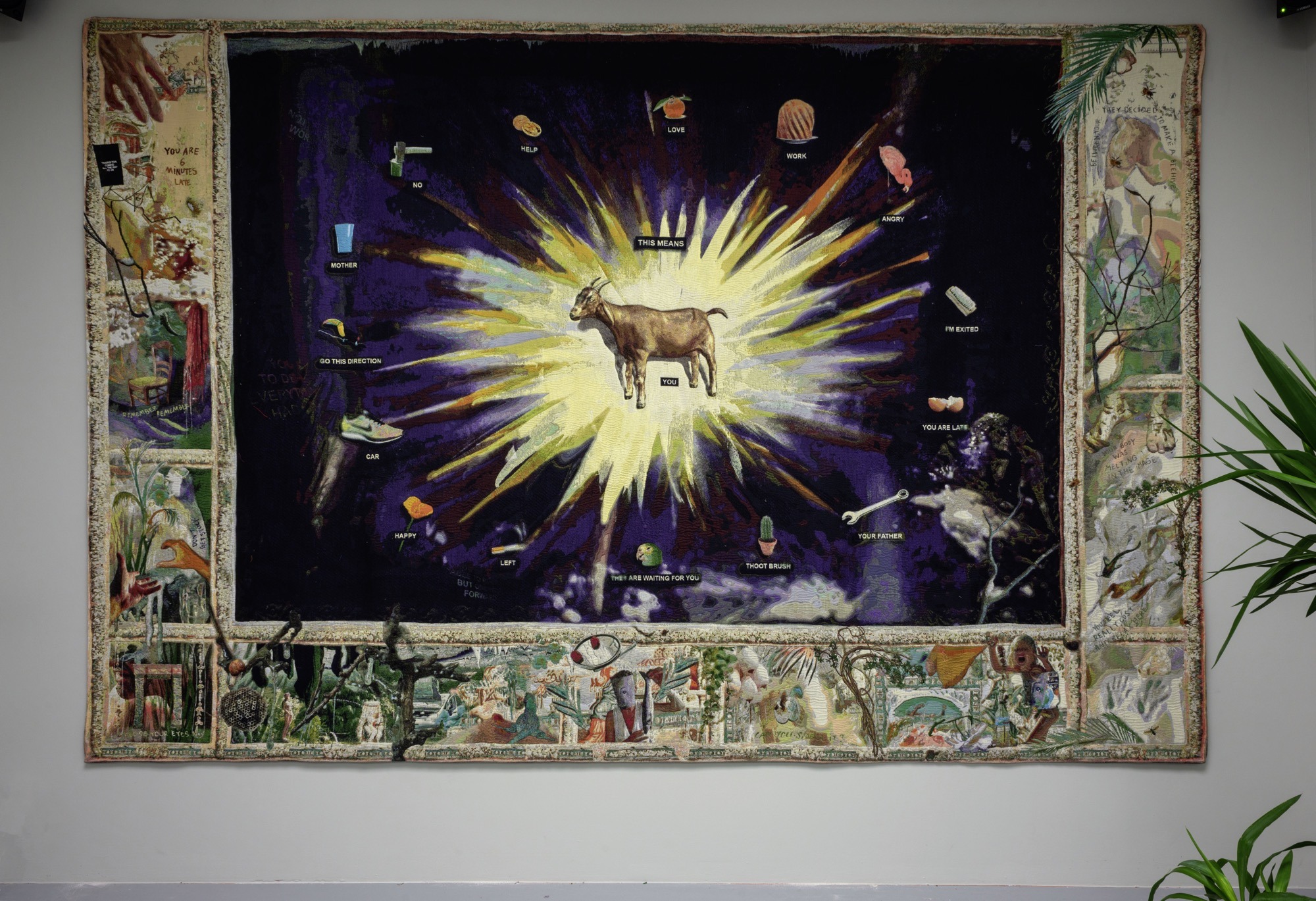 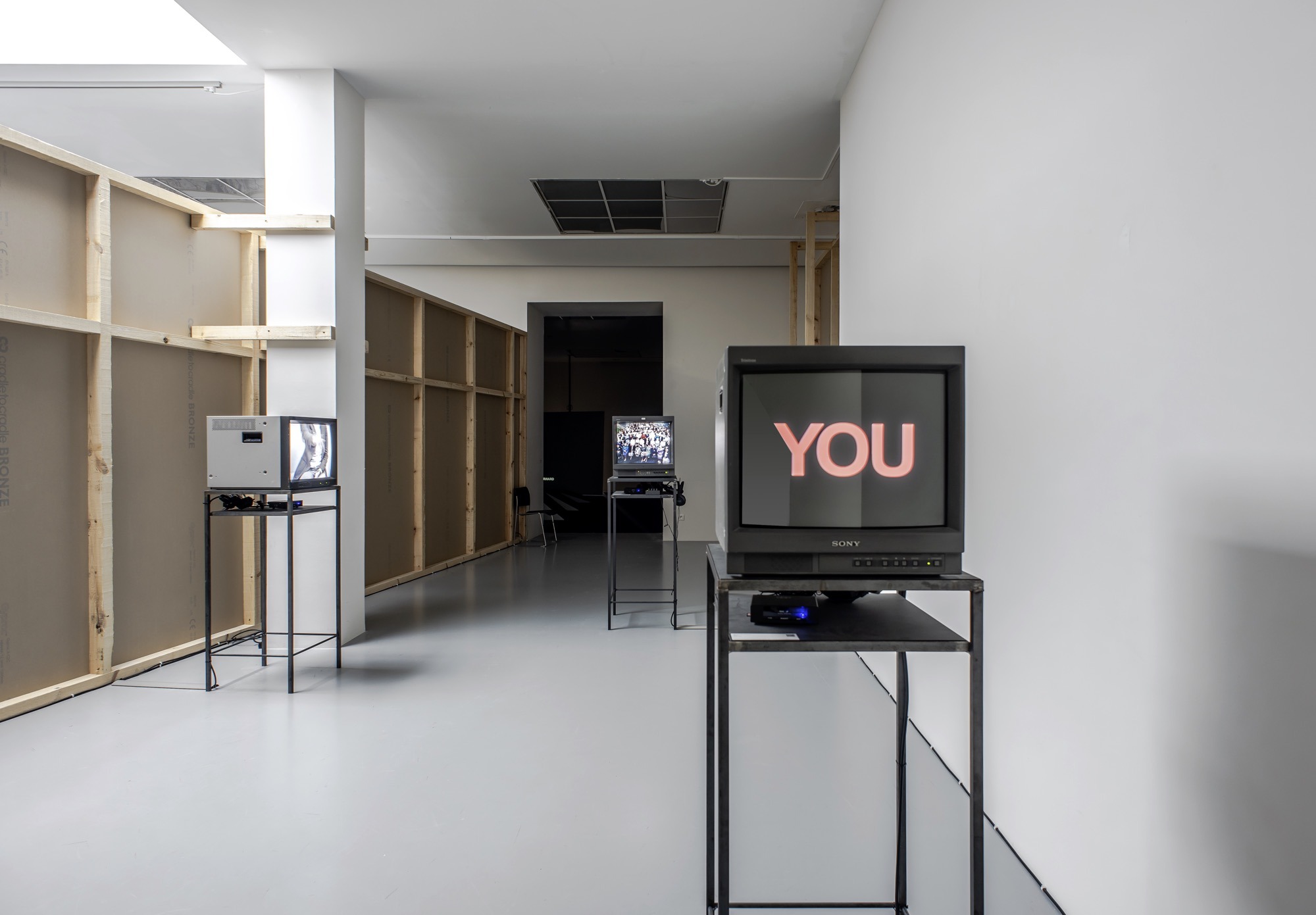 Laure Prouvost, You Are The Only One, 2014, Courtesy of the artist, and Galerie Nathalie Obadia (Paris and Brussels), carlier | gebauer (Berlin) and Lisson Gallery (London and New York). Exhibition architecture by Diogo Passarinho Studio. Photo M HKA. 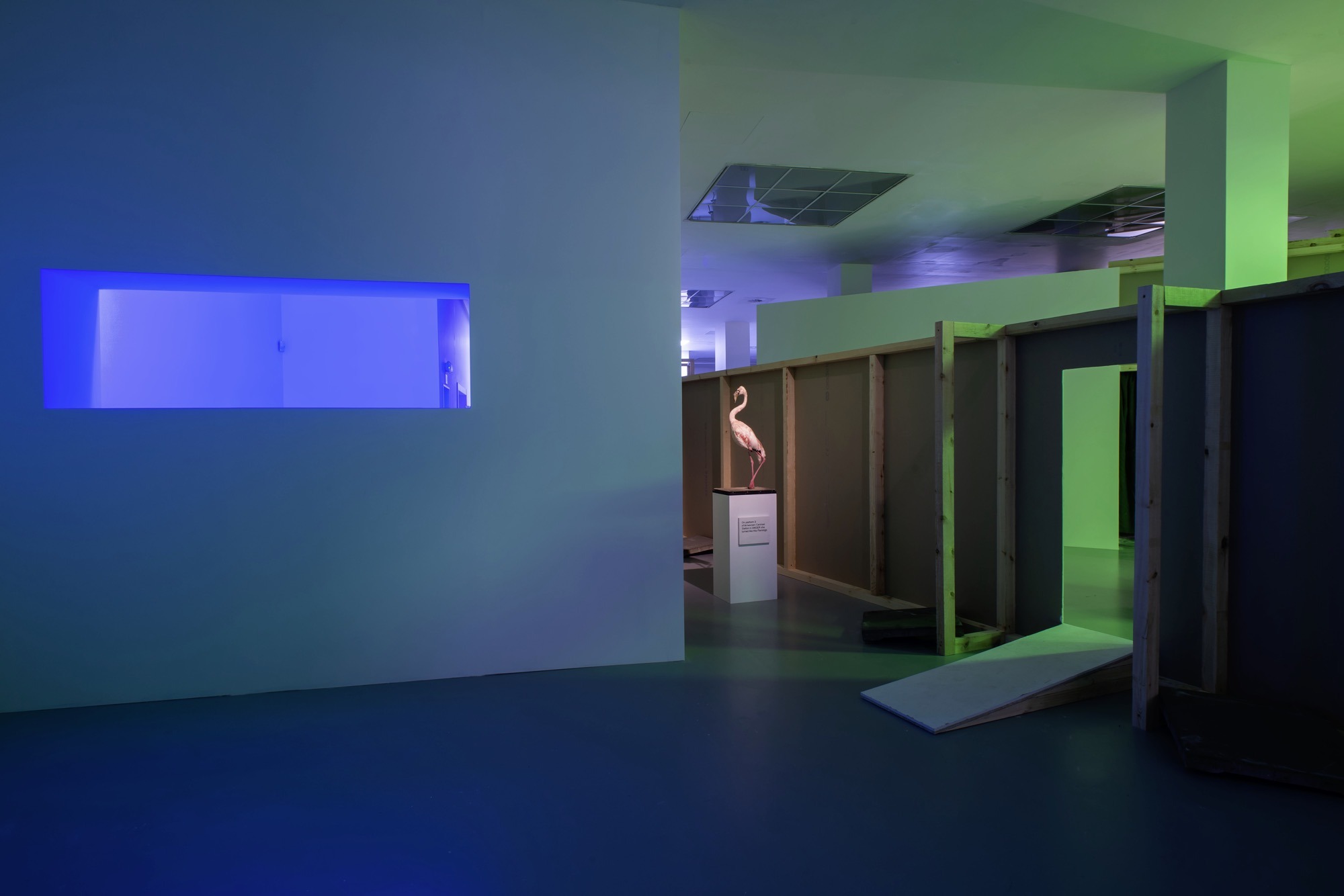 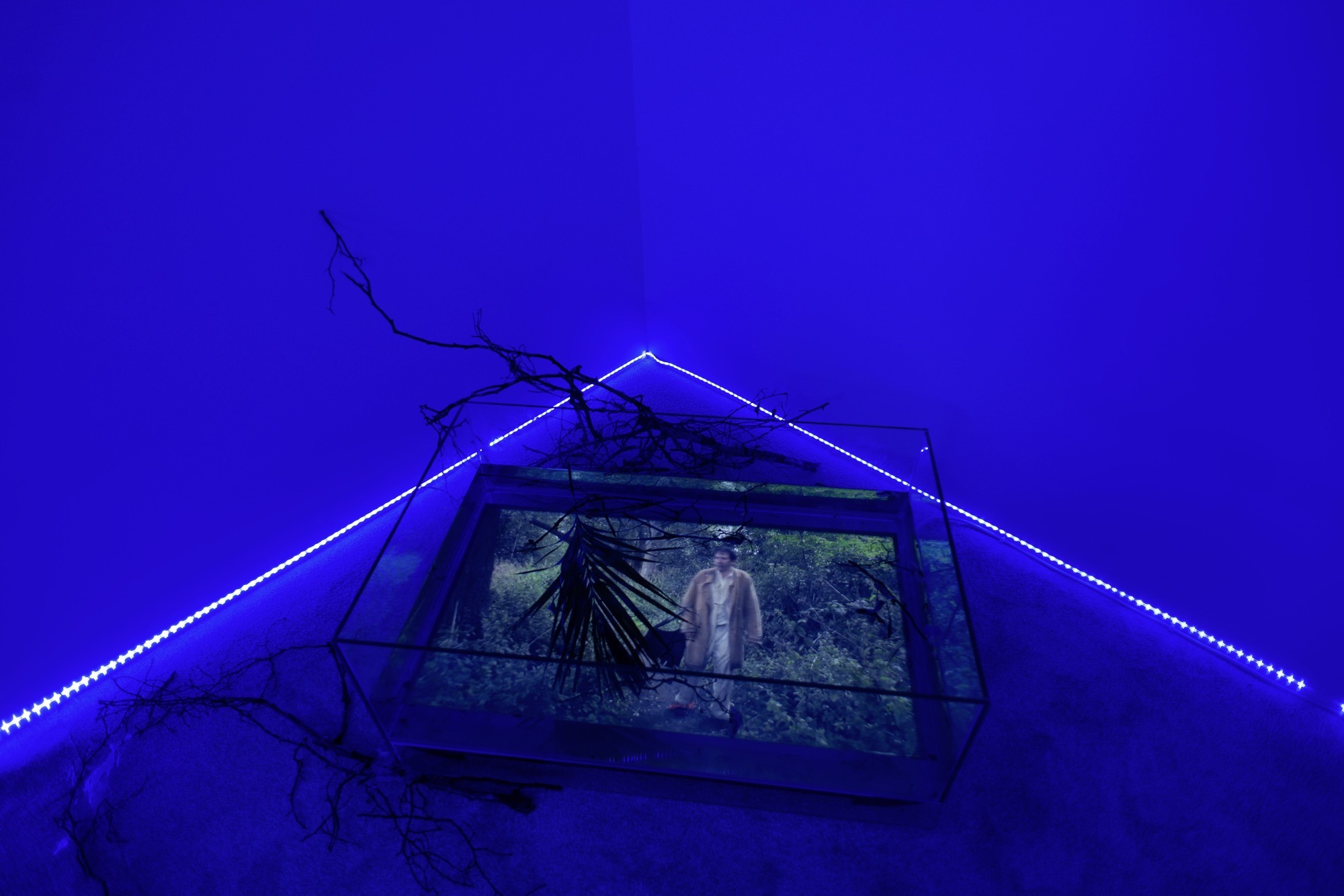 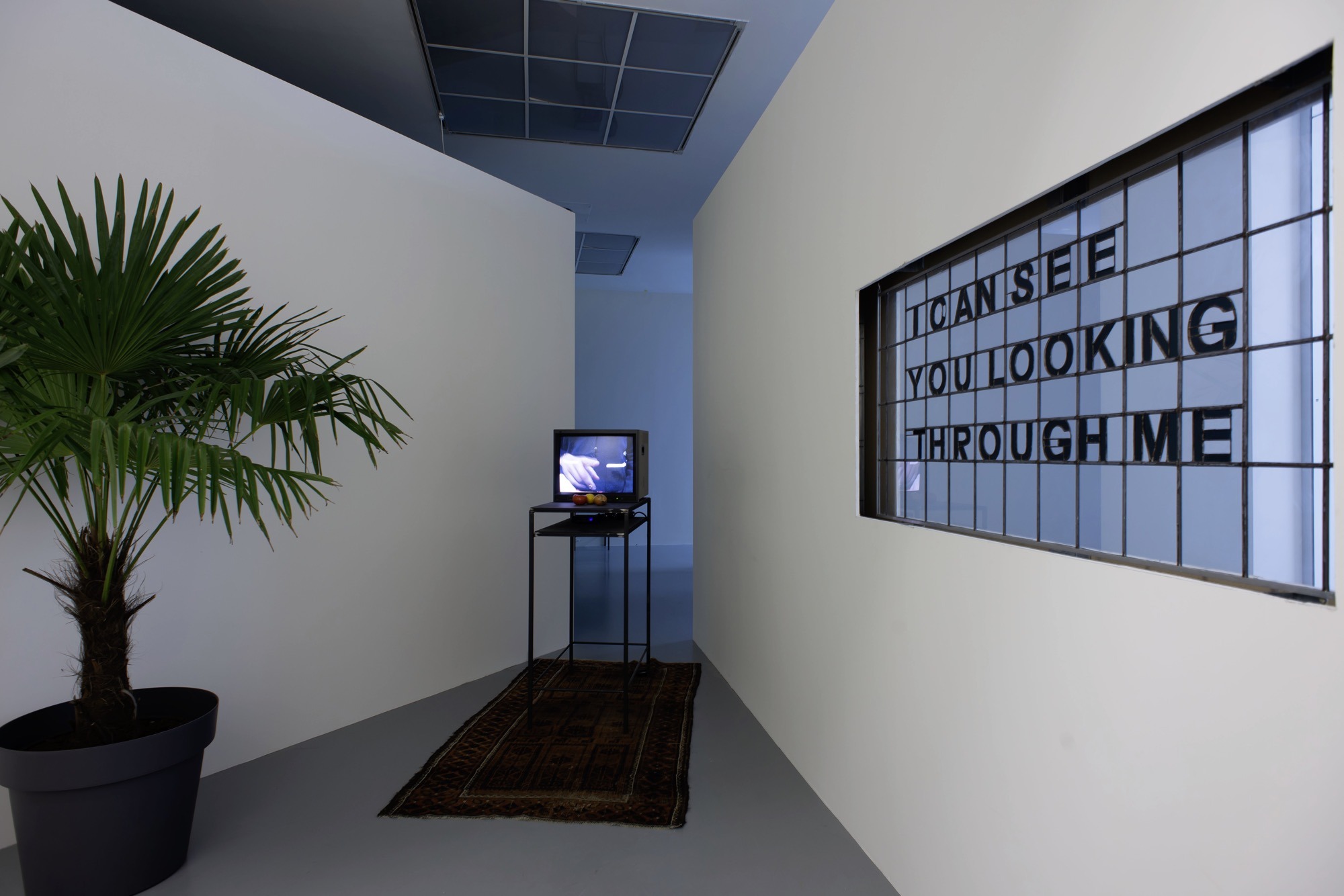 Laure Prouvost, installation view AM-BIG-YOU-US LEGSICON, 2019. Exhibition architecture by Diogo Passarinho Studio. Photo M HKA.
This exhibition will be the largest organised to date on the practice of artist Laure Prouvost. Offering a wide-angle panorama of Provoust’s career – ranging from a key selection of her formative “monologue” video works, through to recent major installations – the exhibition will seek to portray the work of an artist developing complex thought through artistic languages. This museum survey will delve into the philosophical depths of Prouvost’s work, and will consider the notion of the pre-verbal, as well as its incompatibility with the verbal.

The exhibition will present a substantial body of work by Prouvost, emphasising the web of ideas the artist develops for considering the complex state of mental life. Her practice has deep resonance to the significant contributions of mid-20th philosophy and psychoanalysis. This includes the work of pioneers in Object Relations Theory, such as psychoanalyst Melanie Klein, who considered core aspects of human intellectual and emotional development, as manifested through our relations to objects and the external world. Affinities can also be found with the philosophical writings of Simone de Beauvoir, particularly on the need to acknowledge our fundamental ‘ambiguity’ as humans as a way to find freedom. Prouvost’s work similarly seeks to locate primordial conditions of the human subject at the breakdown of meaning located between the modernistic binaries of nature and culture, intuition and rationality.

Including new works produced by the artist, the exhibition will be a total environment emphasising the experimental, layered and intuitive aspects of the artist’s practice to date. It will offer a key moment to reflect on the practice of somebody considered one of the most original artists of her generation. The artist was recipient of the Max Mara Prize in 2012 and the Turner Prize in 2013. In 2019, she will represent France at the 58th Biennale of Venice. In March Laure Prouvost will open Performatik19, the Brussels biënnale for performance art, with the performance They are waiting for you. Prouvost lives and works in Antwerp, Belgium.

A substantial publication will be published to accompany the exhibition, co-published by M HKA and Book Works. Titled LEGSICON the publication will function as a sort of dictionary, listing and expanding on the many key notions and symbols in Prouvost’s work.

In the framework of EXTRA, with the support of the Institut Français, the Cultural Service of the French Embassy in Belgium and Plantrent Group.
www.muhka.be