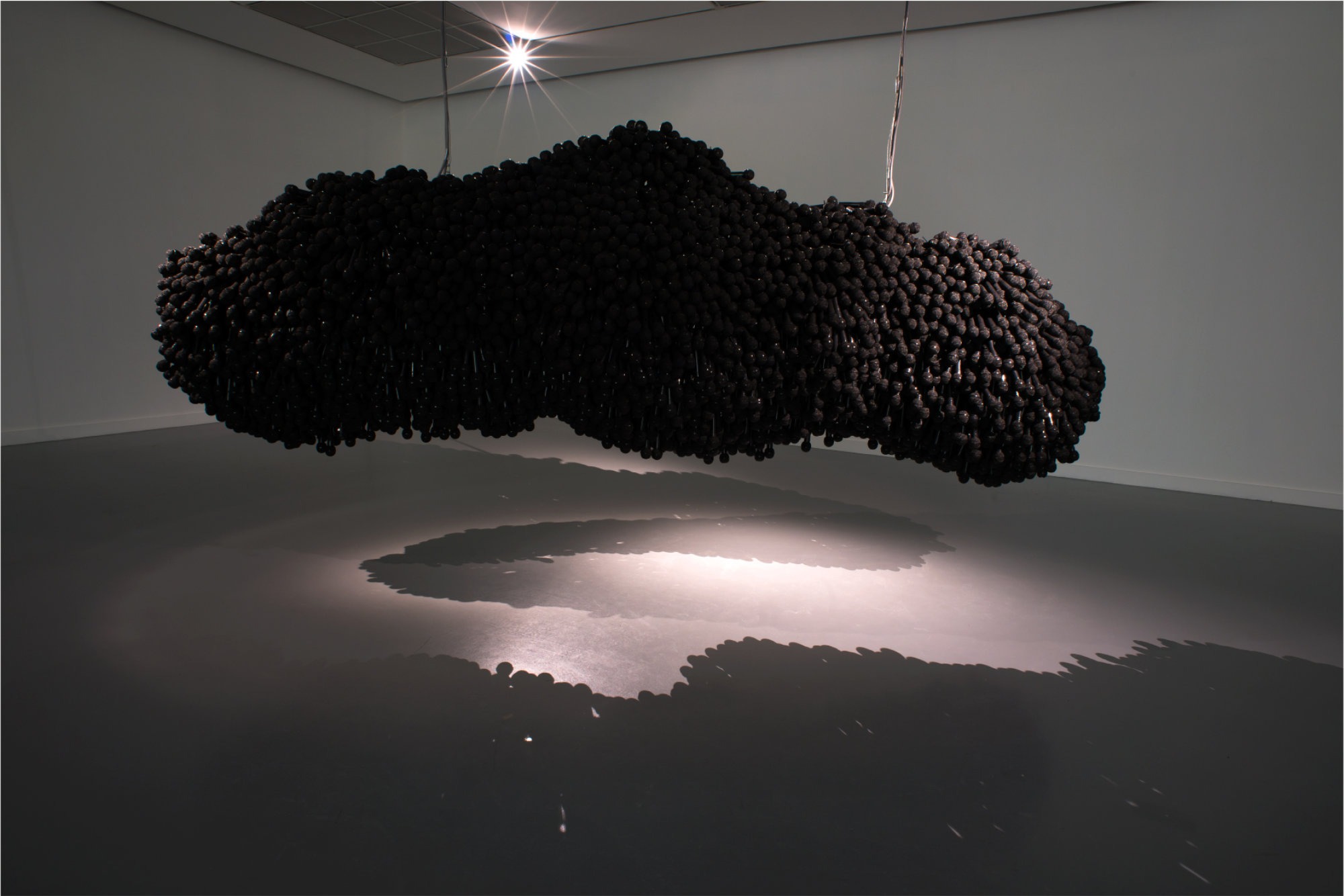 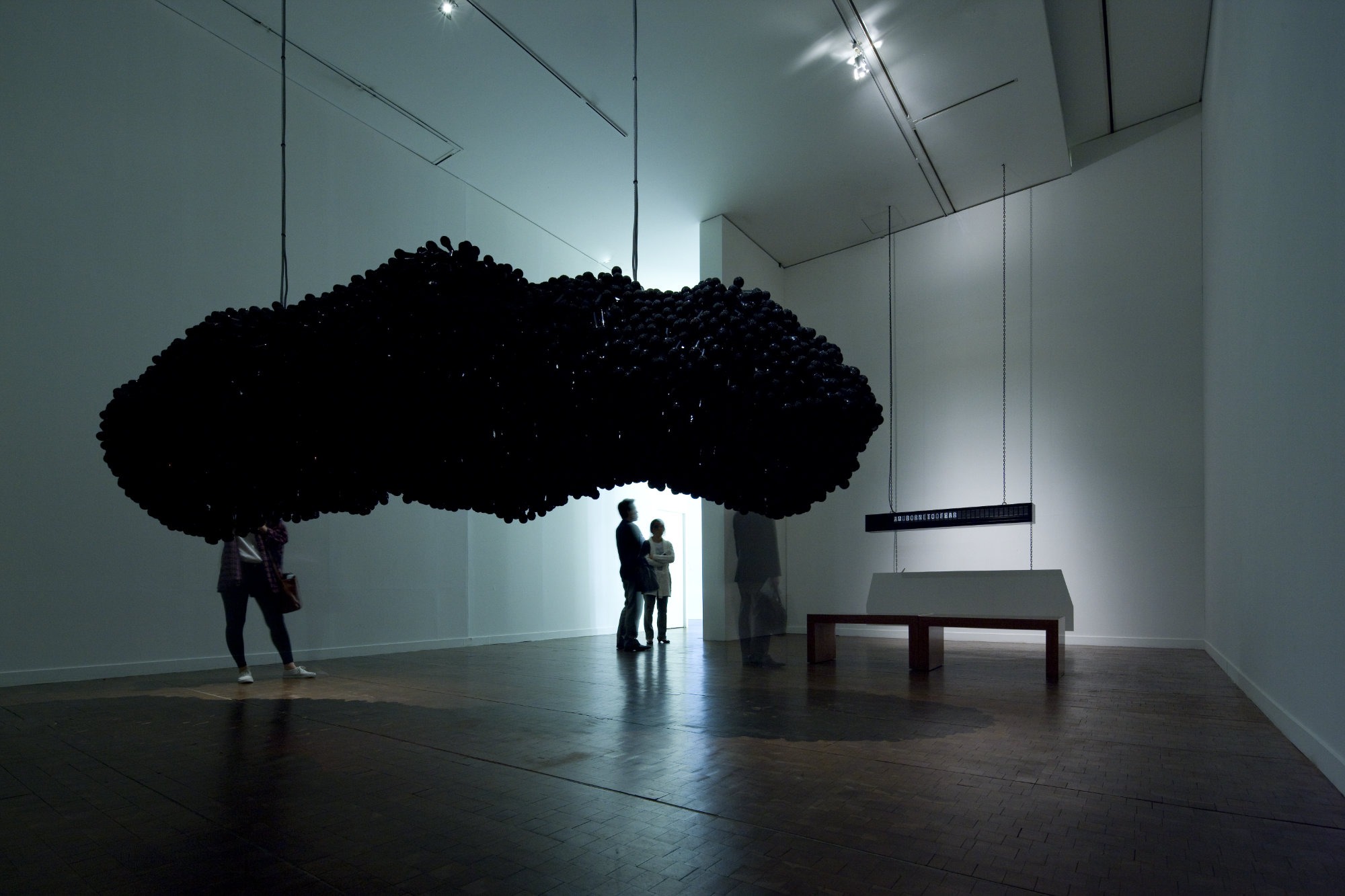 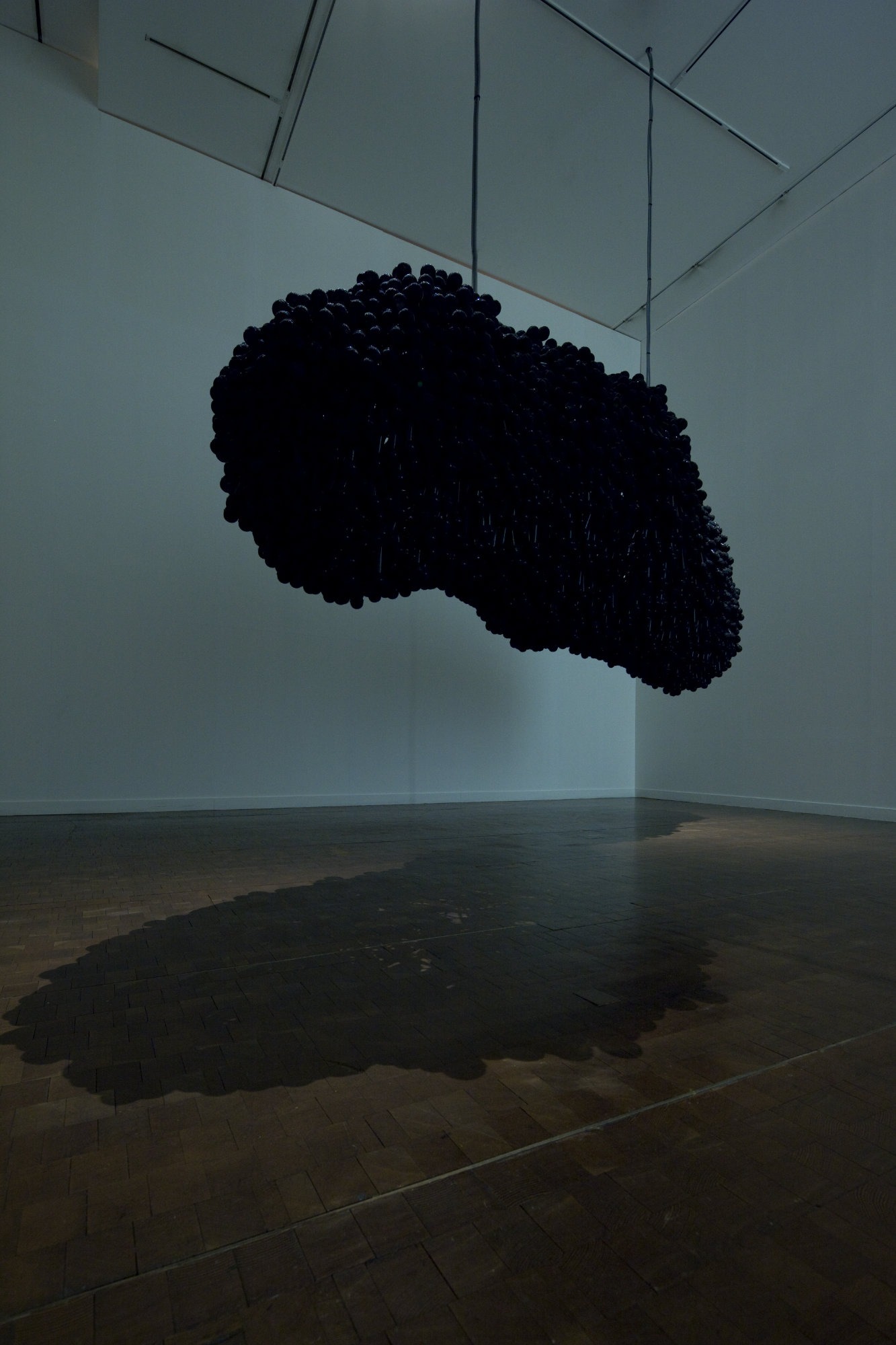 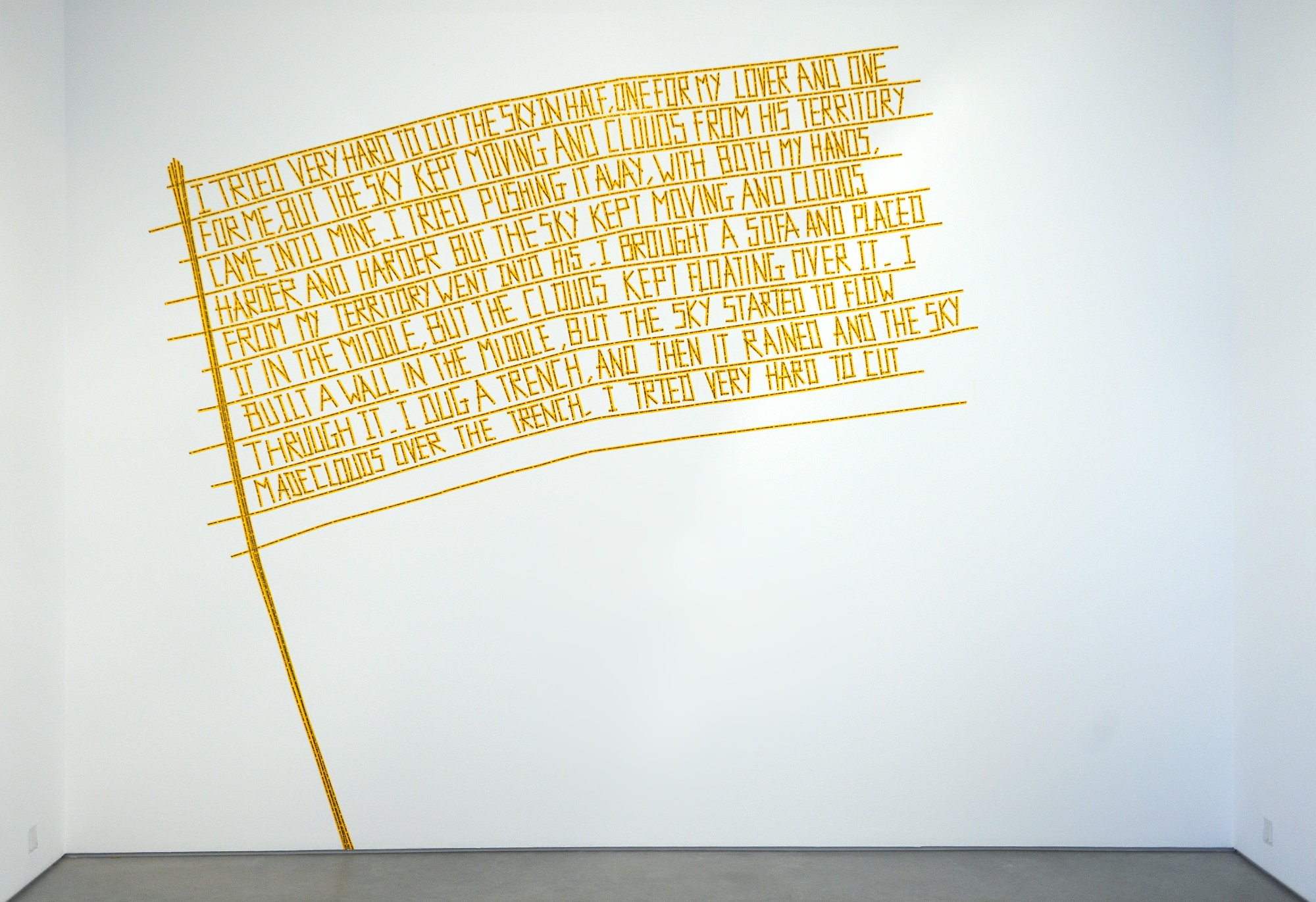 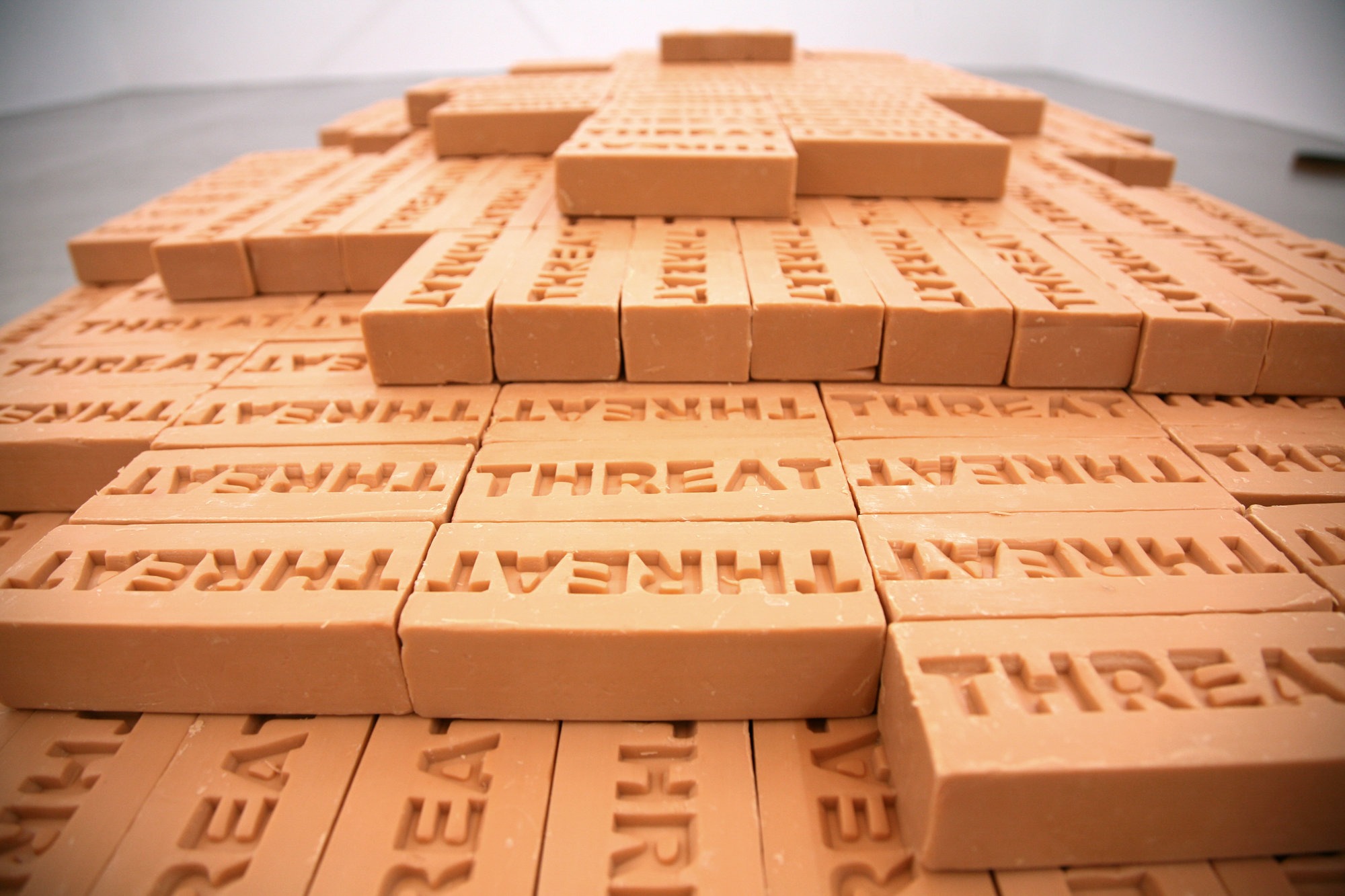 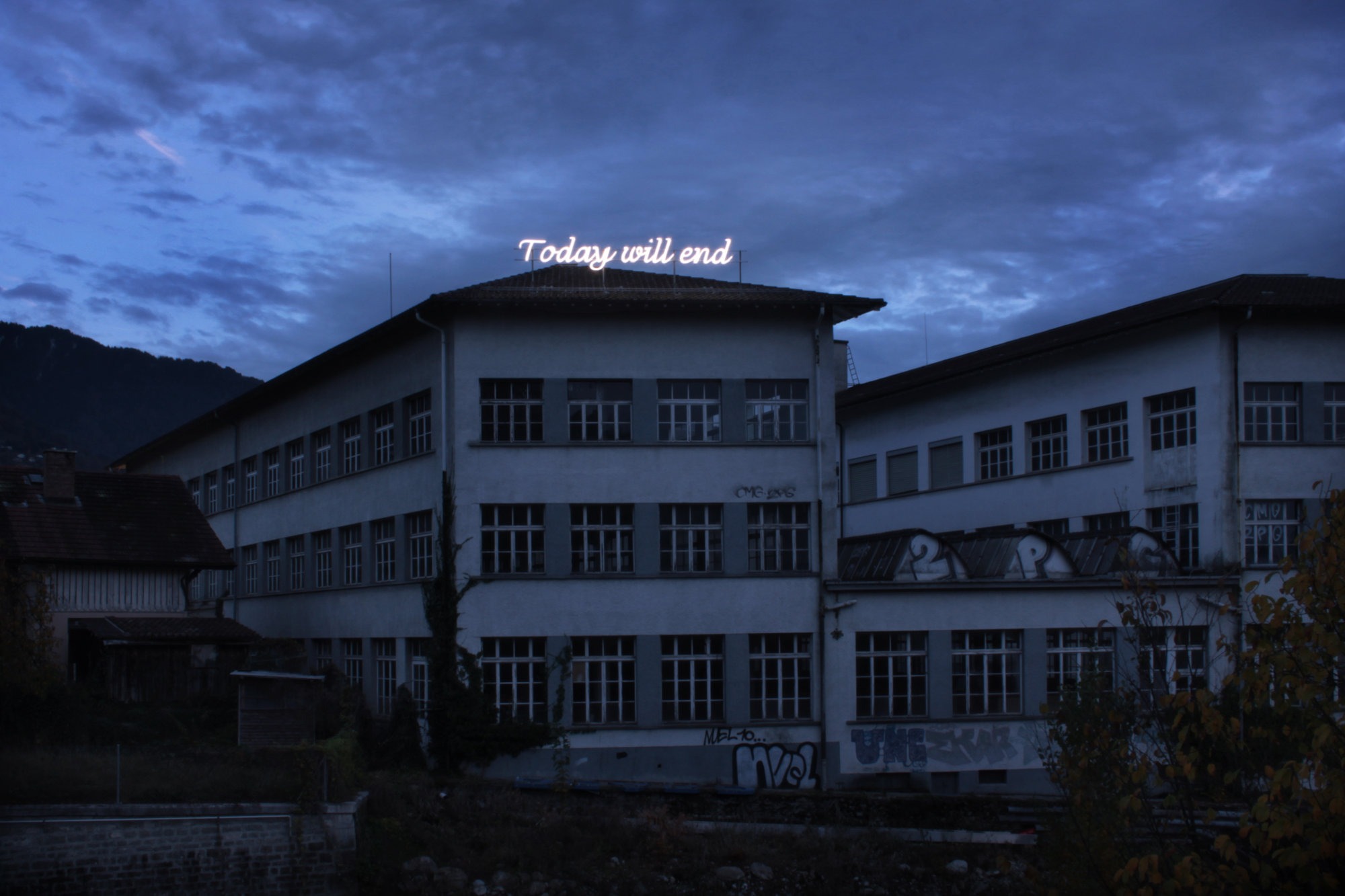 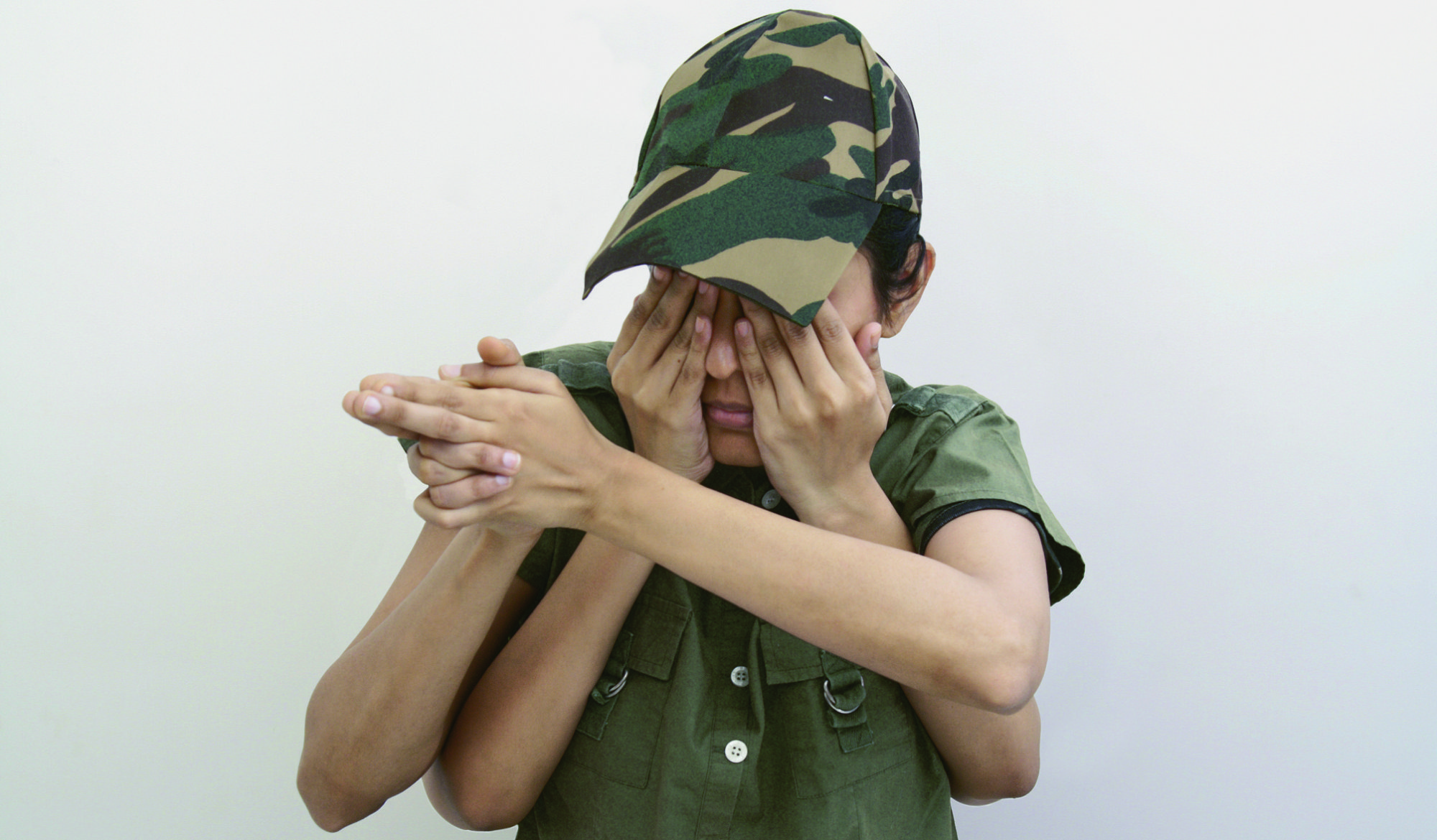 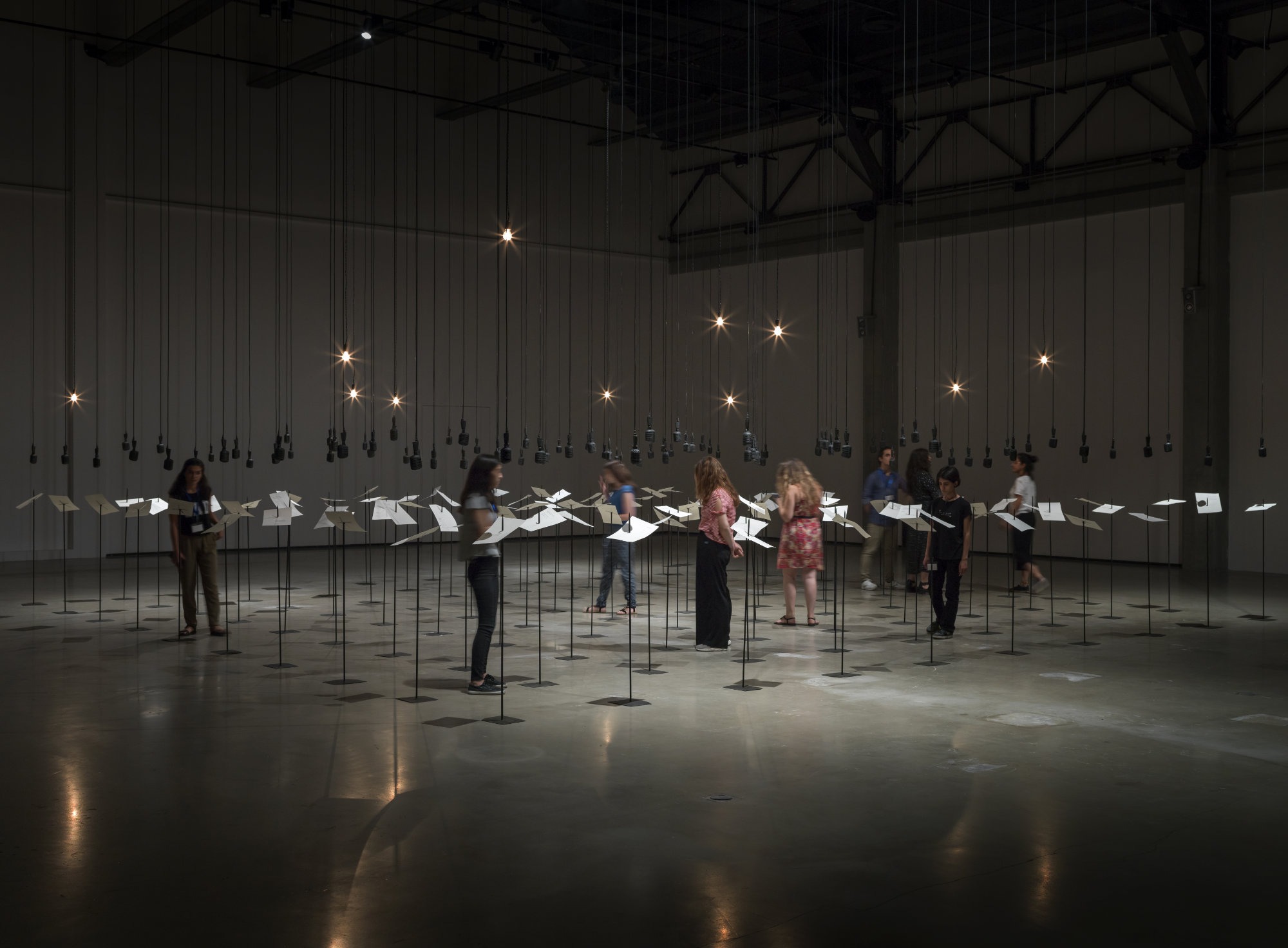 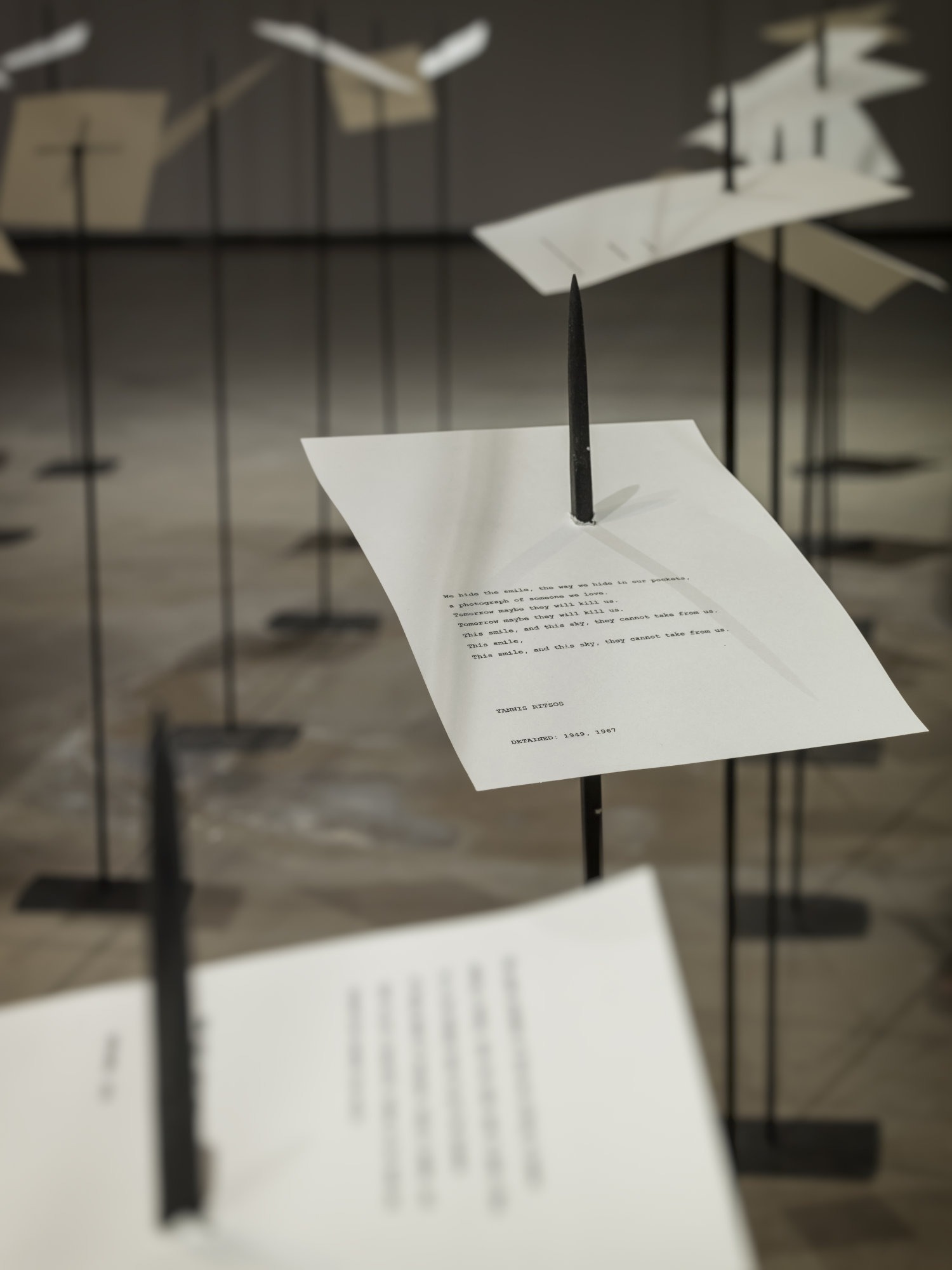 Shilpa Gupta, For, In Your Tongue, I Cannot Fit (detail), 2017-2018. Commissioned by YARAT Contemporary Art Space and Edinburgh Art Festival. Photographer: Pat Verbruggen.
Sound installation with 100 speakers, microphones, printed text and metal stands Site specific
Shilpa Gupta creates artworks that examine human relations, subjectivity and perception through themes such as desire, conflict, security, technology, borders and censorship. Her work is multi-faceted and often interactive, typically utilising media such as sculpture, installation, text and photography, and regularly displaying a mastery of audio and visual technologies. Considering technology as an extension of body and mind, Gupta possesses a sharp political consciousness towards the role, psychology and aesthetics of different media forms, particularly towards their complicity in the production of fear. Though her works could be interpreted as referring to the social or political situation of specific cultural or national contexts, Gupta keeps them decidedly open, allowing their themes to be interpreted differently wherever and whenever they are exhibited.

M HKA presents the first mid-career survey exhibition of artworks by Shilpa Gupta, bringing together many of her key works for the first time. As one of the established artists of the Mumbai contemporary art scene to have emerged since the 1990s, this exhibition offers an overview of the practice Gupta has been developing for more than twenty years. It will consider the evolution of her work over this period, foregrounding the speculative nature of her practice, as well as the depth of her critical engagement with psychology, behaviour, politics and language. In 2014, works by Gupta were also included in Don’t You Know Who I Am? – Art After Identity Politics, an important research exhibition in the recent history of M HKA in defining a new reading of contemporary art that considers questions of human diversity in relation to new aesthetic and philosophical dimensions. Together with the new acquisition of her major installation Threat (2008-09) for the museum’s collection, this survey exhibition seeks to consolidate Gupta as a key reference for M HKA.

Shilpa Gupta lives and works in Mumbai, India, where she studied sculpture at the Sir J. J. School of Fine Arts from 1992 to 1997. She has had solo shows at venues including: Contemporary Arts Center, Cincinnati, USA; Arnolfini, Bristol, GB; OK Centrum, Linz, Austria; La synagogue de Delme, Delme, France; and Lalit Kala Akademi, New Delhi, India, amongst many others. She presented a solo project as part of My East is Your West, a two-person joint India-Pakistan exhibition organised by the Gujral Foundation in Venice in 2015. Gupta has also participated in the 58th Biennale of Venice (2019), Kochi Muziris Biennale (2018), Berlin Biennale (2014), New Museum Triennial (2009), Sharjah Biennial (2013), Lyon Biennale (2009), Gwangju Biennial (2008), Yokohama Triennial (2008) and Liverpool Biennial (2006). She has also exhibited in biennial exhibitions in Auckland, Brisbane, Seoul, Havana, Sydney and Yogyakarta amongst several others. In 2017, she participated in the Gothenburg Biennial curated by Nav Haq, which was titled after her text work WheredoIendandyoubegin.

The exhibition is curated by Nav Haq, Associate Director at M HKA
www.muhka.be