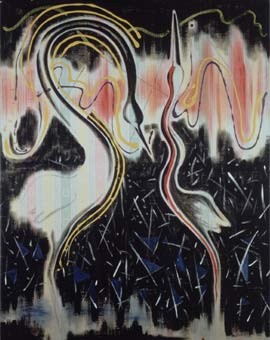 In an eye-opening exhibition the MUMOK draws attention to the phenomenon of ‘bad painting’ which, up till now, has been given too little consideration. Twenty-one painterly positions will be shown that, in accordance with the concept’s spectrum of meaning, manifest their ‘badness’ in various strategies of bad, ugly or malicious painting and thus contain elements of irony, protest, trash, kitsch and shock.
Bad painters criticise painting from within and thus open up new possibilities. As early as the 1920s, in phases of their oeuvre, Francis Picabia, Giorgio de Chirico and later René Magritte disputed the prevailing avant-garde belief in progress with stylistic plurality and mixture of styles. In the spirit of the Situationist International Asger Jorn overpainted pictures he found at jumble sales thus formulating criticism of passive cultural consumerism. At the beginning of the 1960s Georg Baselitz also used ‘bad painting’ as a strategy of protest: he wanted 'to paint really bad paintings' using 'with muck, with mud, with non-colours' and to 'establish something against all of the beautiful things [. . .] aggressively and with a fierce contradiction.' In the 1980s ‘bad painting’ experienced a high point: Albert Oehlen, Martin Kippenberger and Werner Büttner undertook a radical questioning of the medium and its possible effectiveness. They campaigned against the often all too simple 'good painting' that was experiencing a boom everywhere. The refusal by American Julian Schnabel to commit himself to one style also derives from a spirit of rejection of all rules and obligations.
The exhibition leads up to current positions such as that of John Currin or Lisa Yuskavage. These attack the American canon of values such as ‘good taste’ and beauty in a way that has been verbally abused as ‘shocking’, ‘sensationalist’ and ‘politically incorrect’. In doing so they had recourse to the painting techniques of the old masters.