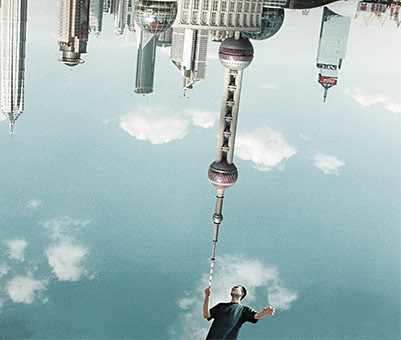 In a cooperation with the National Museum of China (NAMOC), MUMOK is showing around 200 works that provide insight into current art in China. At the centre of this concern is the question of the relationship between realist art and social reality. Realistic means of expression run like a recurrent theme through Chinese contemporary art which has generated an immense media and thematic pluralism as a result of globalisation and the rapid urbanisation and mediatisation of society since the 1990s. The exhibition begins with works of the 'cynical realists’ – who began to work in a climate of cultural openness after the death of Mao Zedong: Fang Lijun, Yue Minjun and Zhang Xiaogang are regarded as three important representatives of this form of realism in which the tension between the individual and the collective, between social liberalisation and political powerlessness, is thematised.

Alongside painting and sculpture the dominating media of a young generation of artists who, in the midst of globalisation and commercialisation, also turn to the obverse of this progress are digital photography, video, film and computer animation. Works by Liu Xiaodong, Shen Ling, Chen Wenling, Cui Xiuwen and Jiu Jianhua thematise questions about one’s own identity in a society determined in equal parts by tradition and innovation; communism and capitalism, with all its contradictions, insecurities and potential. On the outside facade of the MUMOK Wang Jianwei’s larger-than-life figures indicate a new conception of humankind that oscillates between anonymity and individuality.

The central content of a series of photo and video works by artists such as Miao Xiaochun, Song Tao, Song Dong, the group They or Yang Zhenzhong is the city as a rapidly changing place to live. From here on the transition between real and fictive is fluid: the works of someone like Tang Maohong or the Unmask Group with their science fiction-like and fantastic, traumatic motifs thematise fairytale-like, utopian, escapist worlds in which the archaic and the ultramodern permeate one another.

China in Vienna – Az W | MUMOK
The exhibition China - Facing Reality, together with China Production in the Az W, forms the focus China in Vienna. Along with a coordinated opening of both exhibitions on the 25 October, a combination ticket allows a look today's China through contemporary Chinese architecture and recent Chinese art.