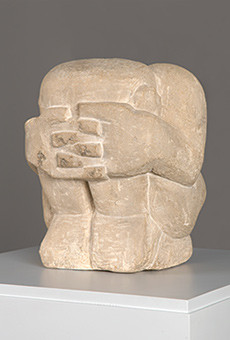 The MUMOK is showing an extensive presentation of the fundamental movements and artists of the heroic years of modernity through to the abstract and expressive tendencies after the Second World War. Significant Expressionist works (Richard Gerstl, Oskar Kokoschka, Karl Schmidt-Rottluff and Ernst Ludwig Kirchner); Cubism and Futurism (Henri Laurens, Giacomo Balla) as well as constructive tendencies can be seen. In addition important works from the Bauhaus (Piet Mondrian, Paul Klee) and the realms of Dada and Surrealism (Marcel Duchamp, Man Ray, Max Ernst, René Magritte)are represented.
Amongst the exhibits there are a number of incunabula of modernity such as the Cowering Figure (1907) by André Derain or Nocturne (1910/11) by František Kupka, one of the earliest examples of conscious abstraction. The MUMOK owns the only collection of critical modern works in Austria and thus plays a significant role in international art education concerning the first half of the 20th century. This is, above all, thanks to the founding director of the MUMOK, Werner Hofmann, who succeeded in building up a top-class collection of works of classical modernity, including numerous seminal works, in a very short time. In doing so he consistently followed his goal of 'showing the characteristic currents that carry the art of our century'.
In this comprehensive exhibition with close to 100 works visitors will be able to get a good overview of the developments of classical modernity in the 20th century – with all its contradictions.
www.mumok.at