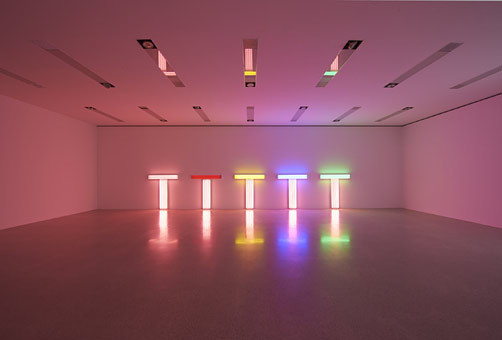 In the early 1960s, US artist Dan Flavin (1933–1996) began using commercially available fluorescent tubes in standard sizes and colours to create an unmistakable œuvre. Precision and careful calculation are bound together with a sensual aura. By choosing the tubes as the material for his works, Flavin signalised the increasing proximity of art with everyday life and the consumer world. The ways in which they are presented are derived from principles of minimalist sobriety. Even the early series of icons illustrates the development from pictures to light-related work and the associated transcendence of traditional genres and forms of art. By affixing fluorescent tubes at critical points in the room Flavin erases the remnants of current notions of how a picture is defined: In the diagonal of May 25, 1963 (to Constantin Brancusi), 1963, the tubes appear for the first time as uncompromising objects in a luminary self-staging. Stripped of anything extraneous, the work develops a luminous power that not only suspends the usual boundaries between work, room and viewer, but also the dividing line between rational form and poetic appearance. One of the high points of this spatially-oriented light art in the exhibition is represented by the so-called European Couples in which the fluorescent tube squares dissolve the corners of the room and immerse viewers in an imaginary, intermingled, blurred colour space. Drawings will be presented together with the light works. These document both Flavin’s process of planning for the works and his artistic sensitivity.

The exhibition has been organized in collaboration with the Kunstmuseum St. Gallen and with the support of the estate of Dan Flavin and is the first showing in Austria of a representative overview of Flavin’s light works. With around thirty works, the spectrum stretches from selected icons through the early individual and seminal works constructed of fluorescent tubes, to the serial and large-scale, room-filling works.
The mumok show will reveal the artistic diversity and developmental possibilities that Flavin was able to draw out of commercially available fluorescent light tubes with such impressive consistency beginning with the first “golden” tube set diagonally against the wall, to the monuments for V. Tatlin and on to works such as an artificial barrier of blue, red and blue fluorescent light (to Flavin Starbuck Judd) that block the viewer’s path.
www.mumok.at