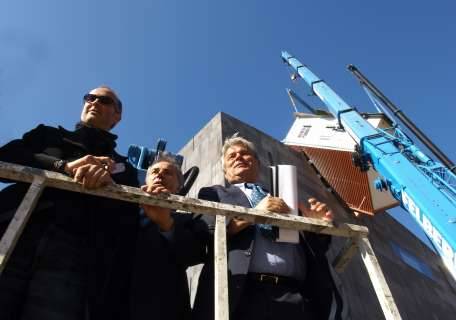 In a permanent exchange of questions and answers about what sculpture is and how it is constituted, Erwin Wurm has worked for more than twenty five years on a many layered body of work that can be understood as a long term study of sculpture as a concept. For Wurm, one of the most successful contemporary artists, anything can become sculpture: actions, written or drawn instructions, or even a thought. His art often treats elementary as well as banal life needs and actions, as well as their perversion, as can be expressed in physical deformations. The artist explores issues such as the thinness craze and obesity, fashion, advertising, the cult of consumerism, whose central fetishes include the private home as well the car. The exhibition shows with more than 400 drawings, videos, photographs, and sculptures, the most expansive show of the artist's work to date.

His most recent prominent work, visible from afar, is the object „House Attack“, installed on MUMOK's external façade: the single family house as a symbol of the everyday, privacy, as well as small-mindedness explodes like a bomb into the façade of the museum — the institutionalized museum temple. In its visual presence „House Attack“ represents an ambivalent metaphorics exemplary for the current work of the artist, a focus of the exhibition.

The Installation was realized with the help of Strabag, Felbermayr and KNAUF.

The idea for „House Attack“emerged while planning the MUMOK retrospective. „House Attack“ is a single-family house that crashes into the roof of the museum, a house like one that might be built at Blaue Laguene (Blue Lagoon), a prefab housing development in southern Vienna. A symbol for conservative, small-minded longings, the single-family house collides into the museum as an temple to the muses, and the museum itself now also becomes part of the sculpture. „House Attack“confuses our perception of art and everyday reality and in its striking appearance and humorous, dramatic staging of the banal is a perfect example of current developments in the artist's work.