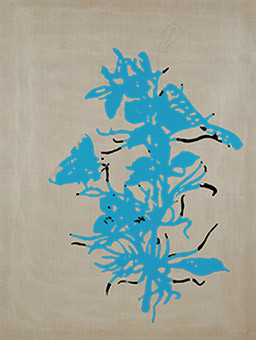 In his works the artist, who was born in 1968 in Linz and lives in Berlin, investigates and initiates an interplay between art which is generated by technical media and painting. By comparing and contrasting these two art genres which are usually regarded as oppositional, he is analysing and extending the character of each of them. In his paintings and interactive media installations he refers to the heroes of art history who have already shaken and renewed painting and redefined pictures by means of performative (Jackson Pollock, Yves Klein) or media-related strategies(Sigmar Polke). In a thoughtful reference to Mannerism as a style in art history which considered historical citation as the basis of every renewal, Huemer calls his art 'media Mannerism'. In the process, references to history and breaches of convention lie as close to one another as conceptual strictness and cheerful (self)irony something that also finds a voice in the title of the exhibition.

Exemplary for Huemer’s ironic enlivenment of history is his artistic, media-based interpretation of early Sigmar Polke paintings in which he pokes 'serious' fun at the conventions of painting but at about his media pictures thus manufacturing a critical distance to both of them. With that Huemer takes the instruments of irony, parody and travesty as used in the history of painting and transfers them into digital media and real space. With the repeated use of bird motifs—the symbolic descendents of the messengers of the gods—in both the paintings and the media works, he is alluding to the historical role of the artist as creator and prophet. But at the same time he puts up for discussion the applicability of that role model in a society where media technology is rationalised.
The artist does not only allow interaction between painting and media-supported art, the past and the present, he also ascribes an interactive role to the public. In his media installations the viewer becomes a user and a trigger for permanently changing image and text structures which, for all their apparent fortuity, still follow clearly programmed parameters.

Along with art history Markus Huemer studied classical philology and philosophy and has always accompanied his art with exacting theoretical texts. They form the foundation of his work and, at the same time, stimulate a permanent discourse around it.

The exhibition presents Markus Huemer’s paintings and media work to an extent that has not happened before. Parallel to the MUMOK exhibition there is a further presentation in the villa of the private collector, Heinz Ploner (Sammlung Ploner) with the title 'Ich kann hypnotisieren! Was kannst Du ? [I can hypnotise. What can you do?]'. In addition, in cooperation with MUMOK, an artist’s manifesto will be published alongside the catalogue.