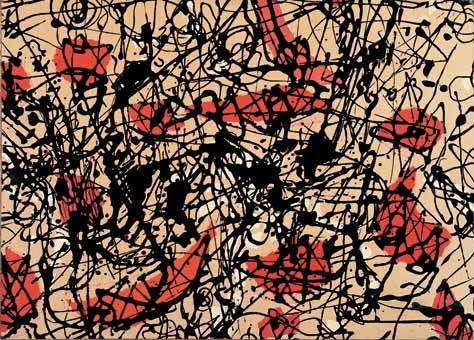 The exhibition deepens and sharpens the definition of two central aspects present in the postwar development of abstract painting: painting as a processual, self-reflecting medium as well as the expansion of painting into the domain where it references objects and space and which accompanied the dissolution of the picture.

Processual painting will be presented as an experiment, picture design primarily as a development arising from the fundamental characteristics of colour and its way of reacting and not from narrative or compositional notions. Creatively-guided self-reflexive paintings come into being by means of painting on and over the support, using a palette knife, dripping, spraying, soaking, throwing the paint etc. and in which the consistency of the paint in its relation to gravity, the character of the ground etc. becomes visible. Approaches of this nature were grounded in the gestural-processual painting of art informel which had become increasingly empty, having deteriorated into a pathetic, academic posturing and became the counterpoint to this new, self-reflective position in painting. Starting with Jackson Pollock, Yves Klein, Morris Louis, Arnulf Rainer, Hermann Nitsch and Max Weiler, a dense spectrum of different, individually-nuanced forms of the phenomenon continues to expand up to the present day (Joseph Marioni, David Reed, Bernard Frize, amongst others). Loans from Austrian artists document the breadth and intensity of this discourse in the national scene (Erwin Bohatsch, Herbert Brandl, Jakob Gasteiger, Hubert Scheibl, Andreas Reiter Raabe, Walter Vopava, amongst others).

The second part of the exhibition follows the dissolution of the pictorial format which began to take place in the 1950s. This story can be sketched as painting’s conquest of space and its transformation into installative and object-like scenarios. The criticism of historical, European-influenced notions of picture-making and composition, as formulated in the areas of Pop, Minimal and Conceptual Art, led to a radical redefinition of painting and pictures in their relationship to both space and the viewer. The works shown encompass historical positions of the 1960s and 1970s (Robert Rauschenberg, Robert Morris, Joseph Kosuth, Karel Malich, François Morellet, Max Weiler, Alfons Schilling, Jorrit Tornquist) down to the most recent past and the immediate present (Imi Knöbel, Heinrich Dunst, Gerwald Rockenschaub, Adrian Schiess, Jessica Stockholder, Heimo Zobernig, Christian Eisenberger).