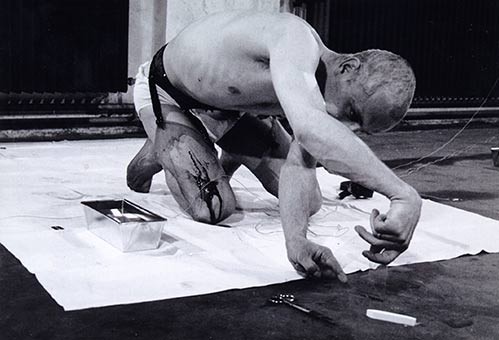 The event 'Art and Revolution' that involved Viennese Actionists Günter Brus and Otto Muehl and took place in 1968 at the University of Vienna went down in Austrian history as the biggest art scandal during the Second Republic.
Brus, Muehl, and Oswald Wiener, the main protagonists of the happening derisively labeled as 'college smut' by the tabloids, had to leave Austria as they faced criminal charges. Almost forty years later, Viennese Actionism has proved to be one of the most significant Austrian contributions to international avant-garde movements. MUMOK owns one of the largest collections devoted to this trend, and has established itself as an international competence center for Viennese Actionism, particularly thanks to the purchase of the Friedrichhof Archive in 2003, including original documents, Action photographs, and film footage.

Austrian gallery owner Julius Hummel has compiled a multi-faceted and representative private collection of Viennese Actionism, and MUMOK is pleased to mount this show to highlight Julius Hummel’s personal commitment. From the outset, he has been fascinated by the radicalism of this art whose potential he recognized early on. He was convinced that Actionism stood smack in the center of revolutionary developments unfolding in international art.

The artists who formed the grouping of Viennese Actionists in the early 1960s included Günter Brus, Hermann Nitsch, Otto Muehl, and Rudolf Schwarzkogler. Surrounded by a conservative political environment, they staged their Actions to overcome traditionalist and academically imbued art concepts. They were striving for new forms of expression and devised various concepts according to which contemporary abstract and informal painting was to be expanded or surmounted by performances. Radically and consistently, they mingled art and life, focusing on the body as a 'field of action' and 'material'.

The artists’ aim was to meet repressed urges, sexual taboos, fears, and aggressions head-on, and even nowadays some consider this highly provocative.
They regarded it as vital to capture and chronicle their performances with a view to communicating their message – that is how a wide range of documentary material emerged, including films, photos, and texts, testifying to the unique variety of this art movement, both in terms of its media choices and themes.

The Hummel Collection, put together since the 1970s, reflects this diversity. It provides a comprehensive overview of the art created by the main exponents of Viennese Actionism – Brus, Muehl, Nitsch, and Schwarzkogler. Julius Hummel has always tried to 'collect holistically', i.e. to put the works by Viennese Actionists in an Austrian and international context. Hence, the
exhibition also features predecessors and related artists such as Marcel Duchamp, VALIE EXPORT, Elke Krystufek, Paul McCarthy, or Arnulf Rainer.