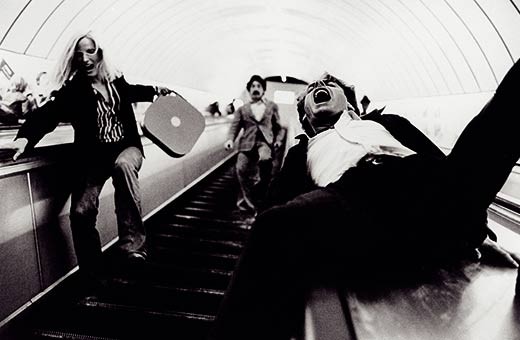 Featuring over 200 individual works, the most comprehensive exhibition of its kind ever to be presented at the MUMOK offers a survey of major contemporary positions in the art media of photography, film, and video.

The exhibition is grouped around several different themes and starts out with a number of works by Thomas Struth and Josef Dabernig attempting an analysis of the viewer’s gaze and its relationship with media imagery. Other works focus on institution critique – including Louise Lawler’s Why Pictures Now which has lent its title to the exhibition – or investigate architectural concepts of space. Geographic, national, and cultural space and its limits are also addressed in the works of David Goldblatt, Andrea Fraser, Emily Jacir, and other artists.

The documentary and fictional potential generated by the photographic image and its relevance for the formulation of history is approached from such diverse directions as Bernd and Hilla Becher’s ‘archaeologies’ of early industrial structures, Christopher Williams’ studies of the conditions of photographic production and reaction, or the thorough research of the Atlas Group into car bombings in the Lebanon. The issues regarding different means of historical orientation raised by these artists link them with the work of Zineb Sedira, Sharon Lockhart and Zwelethu Mthethwa, who each in their own way investigate the individual and collective construction of identity.

Another thematic group brings together important instances of narrative photography, for example by David Lamelas, Jeff Wall, Gülsün Karamustafa, or James Coleman. The model-like quality of the photographic image – both, in a metaphoric as well as a literal sense – is addressed in the works of Thomas Demand, Lois Renner, and others. Conversely, artists such as Nan Goldin, Nobuyoshi Araki or Leo Kandl with their depiction of social scenarios seem more at home in a documentary context.

Beginning in 2002, the activities of the MUMOK have had a particular focus on the categories photography and new media, expanding the museum’s collection by more than 400 new acquisitions.