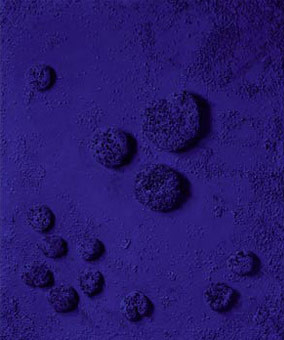 Yves Klein is one of the most important protagonists of the European avantgarde of the 1950’s. For the first time in Austria a comprehensive retrospective is being dedicated to him and will be realized in cooperation with the Centre Pompidou, Paris. Klein is regarded as the 'inventor' of monochrome painting, his name being associated with the International Klein Blue (IKB) he patented. His work — limited to only eight extremely productive years by his early death at the age of 34 — is exceptionally diverse and extends well beyond painting and sculpture into the areas of performative and concept art. Klein’s artistic oeuvre starts from the colour blue as an expression of greatest spirituality and mental energy; the artist subsequently extended the colour spectrum with pink and gold. However he always referred to his incomparable paintings 'as the ashes of his art.'

In his actions and manifestos Yves Klein was concerned with issues such as visibility and invisibility, material and the void, physicality and immateriality. With his so-called anthropométries, 'painting with a living brush' — the imprints of naked models directly on the canvas — he unsettled his contemporaries. In the same way the architectural utopias Klein designed as visualised sites of stabilised 'immaterial painterly sensitivity' have remained misunderstood. He understood his 'fire pictures', made in 1961 just before his death, to be a further development of the anthropométries — painting with the imprint of fire to which, as with gold, he ascribed mythical qualities.

Over 120 paintings, sculptures, manifestos and drawings from important private and public collections in France, the USA and Japan as well as unique original films and documents show an oeuvre that had an enormous effect on succeeding generations of artists — including the Viennese Actionists.