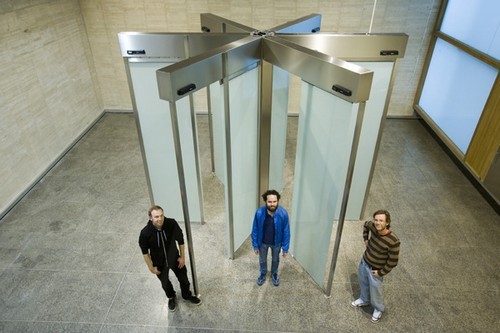 A KASSEN
"Window to the World"

Artist group A Kassen to unveil Window to the World at MUSAC’s Laboratorio 987, a site-specific project focusing on the relationship between Tuñón and Mansilla’s prize-winning museum design and the exhibition hall itself, with a number of pieces that alter the viewer’s perceptio.

This shall be the first ever visible external intervention on the outer shell of the musem venue, which was awarded the 2007 Mies van der Rohe European Architecture Award (2007).

On 24 October Laboratorio 987 is to unveil the first solo exhibition in Spain by Danish art collective A Kassen, curated by Tania Pardo. The group was established in 2004 in Copenhagen by four young artists: Christian Bretton-Meyer (1976), Morten Steen Hebsgaard (1977), Søren Petersen (1977) and Tommy Petersen (1975).

A Kassen are always keen to engage with the space they use and with the viewers themselves. Their works often rely on performance, installation and sculpture. Their disconcerting interventions, often imperceptible at a first glance, eventually succeed in altering the viewer’s perception, with a healthy dose of intelligent humour. A Kassen apply a critical perspective to the absurdities that often arise in specific contexts, both in the art world and in everyday life.

Window to the World, site-specific project for Laboratorio 987
For Laboratorio 987 the group has developed a site-specific project that delves into the relationship between Tuñón and Mansilla’s stained-glass building and the exhibition hall itself. The exhibition takes its title, Window to the World, from one of the works developed for the show. Both the title and the piece itself refer in a literal sense to an architectural element, but also to a broader social concept. Viewers are called upon to fill in the metaphorical and conceptual gaps, playing a key role within the show. This shall be the first time in MUSAC’s history that the outer shell of the Mies Van der Rohe European Architecture Award-winning building is visibly modified. A Kassen shall use panes of glass taken from the outside of the building to construct the Window to the World sculpture within the Laboratorio 987 exhibition hall, thus establishing a connection between the building’s interior and exterior.

Another of the works developed for the show is Permanent reflection, where the artists apply a range of visual tricks to blur the boundaries between various art genres: photography, installation and performance overlap in the viewer’s altered perception. This is a highly conceptual piece that combines a work of art (photography) with performance and installation (involving the viewer).

"Mural (striped)" references the history of Laboratorio 987 itself. In this piece, the artists take on the role of archaeologists and remove the many layers of paint applied to one of the exhibition hall walls for the successive exhibitions held since MUSAC’s inauguration on 1 April 2005. The piece is a tribute to all the shows previously housed in the room and a recovery of the space’s memory. The exhibition closes with a piece installed in an annex to Laboratorio 987.

About A Kassen
A Kassen have displayed a sustained interest in the viewer’s interaction with his or her architectural surroundings. Their work probes the limits of what is and isn’t art, with frequent conceptual references to the 1960s. An example of this approach can be found in Concrete Floor, one of the collective’s most renowned pieces, where a young man sits through the entire duration of the exhibition, unable to move because his sneakers are stuck in the gallery floor. The action challenges us to discover the reason behind this random viewer’s immobility. In their action Endless Döner, cooks from a number of döner kebab restaurants in Copenhagen carved their skewered lamb meat in the style of Brancusi, with the food becoming a sculpture that was then served up to the restaurant customers, who were unaware of the fact they were taking part in an art performance. Precisely that imperceptible boundary between art, the decontextualisation of everyday situations and irony is A Kassen’s focal point.

The Laboratorio 987, project room for site-specific artistic projects of MUSAC, is an adjoining space that functions independently from the general program of the Museum.
www.musac.es