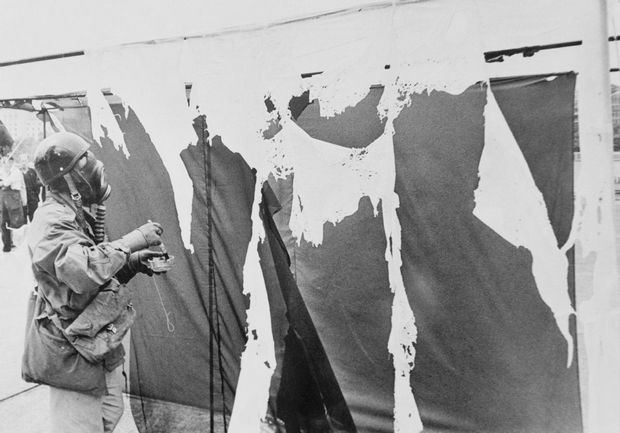 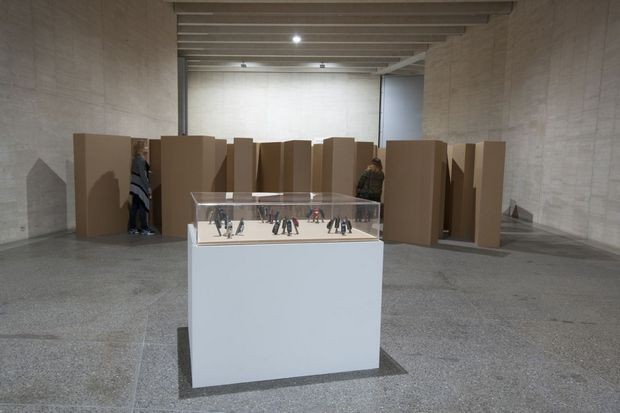 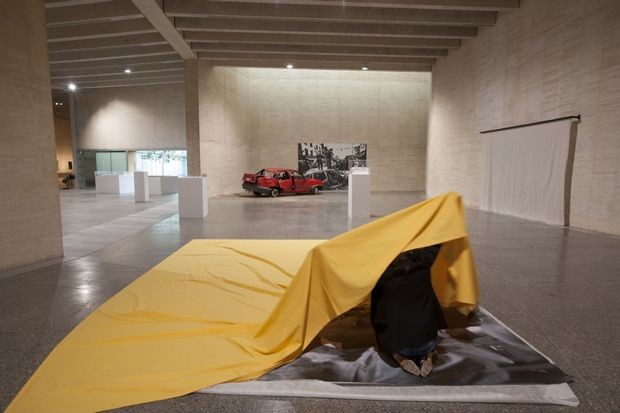 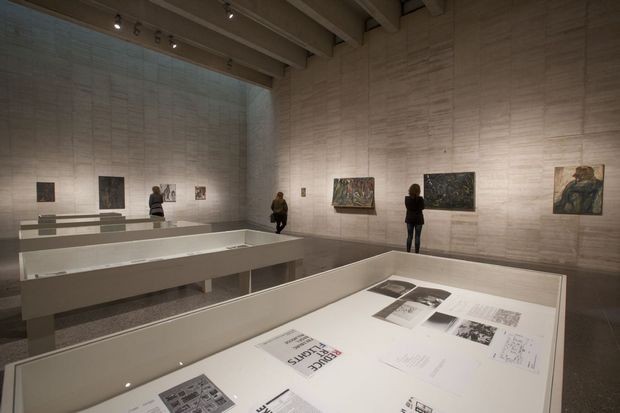 Act or Perish. Gustav Metzger - A Retrospective is the first extensive overview of an artistic oeuvre today considered as one of the most important in the 20th century, and spans the period from the late 1940s until today. It includes for the first time a more systematic insight into Gustav Metzger’s early years of political activism and his formative years as an artist. Showing the influence of environmental and political engagement on his artistic radicalization, it includes substantial amounts of documentary material from the artist’s newly rediscovered own archives.

Moving swiftly during the 1950s from studies in sculpture and painting into what became the central themes of Gustav Metzger, Auto-Destructive and Auto-Creative Art, it connects these concepts to his engagement with political activism, above all with the movements for nuclear disarmament and environmental awareness. The title of the retrospective, Act or Perish, comes from a phrase coined for The Committee of 100, an anti nuclear arms organization formed under Lord Bertrand Russell, to which Gustav Metzger was a first informal secretary. Act or Perish points at the activist and political core of Gustav Metzger’s lifetime achievement, but also illuminates later developments, like his Historic Photographs (from the mid 1990s and on) and large scale installations like In Memoriam.

Gustav Metzger was born 1926 in Nurenberg in Germany to a family of Polish Jews. He grew up in the shadow of increased Nazi propaganda and power display, particularly the massive “Reichsparteitäge” staged annually between 1933 and 1938 in his hometown Nurenberg. Metzger was rescued in 1939 together with a brother by the buses of the Refugee Children Movement, while another brother and his parents perished as victims of the Holocaust.

Act or Perish follows Gustav Metzger through his entire artistic career. A central role in his art is held by his manifestos for an Auto Destructive art – the first of which was published in 1959. The exhibition sheds light for the first time on how this radical move evolved from his experiments and developments with painting, and that his work as a painter continued still during his first years of working on Auto Destructive Art. In particular his ‘demonstrations’ with acid paintings, together with works on industrial materials like mild steel and plastic, show a direct relationship to the manifestos for an Auto Destructive art.

Parallel to this and as a direct counterpoint, Gustav Metzger wrote a manifesto for an Auto-Creative Art and worked on related projects, where he allowed autonomous processes to develop forms and movements beyond the artist’s control, and in close proximity to science and technology. From this works like Drop on a hot plate developed, but also his more famous Liquid Chrystal Projections. The ever changing and moving colour patterns spontaneously created in these projections became popularized through the aesthetics of psychedelia bands like Cream and Pink Floyd – in the same way as Gustav Metzger’s lectures on Auto Destructive Art inspired Pete Townsend and The Who to their trade mark action of finishing concerts with demolishing their instruments and equipment on stage. Through his work with Auto Creative Art, Metzger came to be involved also in cybernetics and computer generated art.

Inspired just as much by the strategies of early 20th century vanguard movements like Dadaists and Futurists as by political activism, Gustav Metzger was involved also in some of the emerging movements of the post-WW2 era. He was invited to the first Fluxus manifestation in Britain, the Festival of Misfits in 1964 – albeit his proposed project for the exhibition at Gallery One in London was rejected. He intended to paste the pages of the newspaper Evening Standard every day on a gallery wall – the act would have coincided with the Cuba nuclear crisis. In 1966, Metzger initiated the Destruction in Art Symposium (DIAS), a gathering of artists and art activists like Wolf Vostell, Yoko Ono, John Latham, Günter Brus, Hermann Nitsch Barbara Gladstone, and Peter Weibel. This event has been widely regarded as seminal in the forming of artistic awareness in the late 1960s.

Gustav Metzger’s work has always been connected to current developments in art as well as in society. Always being a step ahead of his environment, and envisioning more radical and bold projects, he has repeatedly experienced the fate of rejection. He was invited, but no work included, in the legendary exhibition “Bewegen Bewogen” at Moderna Museet, Stockholm in 1961. For “Ducumenta 5” in 1972, he was presented in the catalogue, but his proposed work – a plastic cubicle continuously being fed with the exhaust fumes of cars – was not realized. His project proposed for the UN Environmental Conference in Stockholm the same year, involving the planned combustion of 120 cars, was likewise not realized by the organisers.

Gustav Metzger proposed an art strike for all artists 1977-1980, as an act to stop the commercialization of art. Intentionally or not, this was followed by more than a decade of his relative absence from the art scene. Instead Metzger became occupied with academic studies into the works of Vermeer van Delft, and in organizing a first conference on art in Germany during the Nazi period.

In the 1990s, interest in Gustav Metzger’s work started to surge again. An extensive exhibition at Oxford MoMA in 1995 presented older works by him, together with an entirely new body of works, called “Historic Photographs”. In these works Gustav Metzger used photographs from distinctive moments in 20th century history, representing violations of human dignity, political violence, and environmental abuse. These works are often but not always hidden, blocked or made unavailable in various ways. In direct line with these works are his later large scale installations, that also reflect on the disasters of our time, not the least the Holocaust.

All aspects of Metzger’s opus will be shown at the exhibition in MUSAC after large-scale exhibition presented in the Center of Contemporary Art in Torun in 2015 which was integrated with unique reconstruction of “Extremes Touch” works presented in Kunsthall Oslo along with “Liquid Crystals” in Kunstnernes Hus in Oslo in 2015/26.

Exhibition is accompanied by the exhibition catalogue edited by NERO, which provides readers with a rich array of theoretical contributions, including a conversation between Dobrila Denegri and some of the DIAS participants, such as Yoko Ono, Hermann Nitsch, Ivor Davies and DIAS NY organizer Jon Hendricks, as well as Metzger’s own writings. The contributors Pontus Kyander, Andrew Wilson, Mathieu Copeland, Leanne Dmyterko, Hans Ulrich Obrist, Manuel Olveira take up different aspects of Metzger’s work, from the artist’s early political activism, to his experimentation with painting to his drafting of the manifestoes for Auto-Destructive Art, providing us with an invaluable and much awaited document for consultation in contemporary art.

Act or Perish. Gustav Metzger: The Retrospective in Poland and Norway was organized with the support of Ministry of Culture and National Heritage of the Republic of Poland and EEA Grants Program "Promotion of Diversity in Culture and Arts within European Cultural Heritage”.