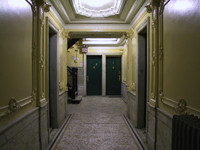 Coinciding with MUSAC’s 5th Anniversary celebration, Bringing Up Knowledge will be presented on April 10th. It is a group show by the artists Alexander Apóstol, Simon Fujiwara, Fran Meana, Moris, Warren Neidich, Jenny Perlin, Diego del Pozo, Pedro G.Romero, Maria Ruido, Danh Vo that explores the construction of knowledge and concepts of memory and history, and their respective transformations and interpretations by social, political, economic and/or religious agents. Curated by Octavio Zaya, Bringing Up Knowledge is the first collaboration between the Museo de Arte Contemporáneo de Castilla y León and the Museo de León, two museum institutions that address art and its historical reality from different temporal premises: the present in the case of MUSAC and the past in that of the Museo de León.

Introductory essay, by Octavio Zaya
In the Information Age in which we live, it seems evident that the dividing line between knowledge and the unknown, reality and fiction, truth and falsehood is ever less clear and more difficult to discern. We are all aware of the fact that current society is raising profound questions about traditional concepts of history, memory and fiction. Every day we discover intentional manipulations, falsifications and concealments of the information that reaches citizens in realms of politics, religion, science, and ultimately in all fields of daily life, making it difficult to interpret or form an opinion not only about contemporary events but also about those of the past.

Philosophy has been asking us for centuries about “reality” and “truth”, about “the effects of reality” and “the fantasies of realism”, about “official history” and “subjective memory”, simulation and language games. All the same, the generalized relativism which is its legacy today does not seem to have freed us from the suspicion that all learning is compromised, that all knowledge is hardly more than a tool for control.

We know the situation is not new and we also know that history is written by those who win power or wars. But now, with the prominence of image in our culture, and widespread access to the technologies and instruments for manipulating it, we can all improve, change or modify reality, the facts and histories, according to our tastes and interests. All this does not only entail reconstructing or de-constructing the past but also inventing and representing the present. And it all contributes to creation and to the precarious foundations of what we consider to be “learning” or “knowledge”.

Bringing Up Knowledge probes themes related to the erasure, manipulation, revisionism, reconstruction and invention of facts and histories, through works, ideas and projects of artists who have tackled and continue to tackle what ultimately constitutes the establishment of “knowledge”. Apóstol, Fujiwara, Meana, Moris, Neidich, Perlin, Rabago, G. Romero, Maria Ruido and Danh Vo are among the artists who explore through their work the construction of understanding and the concepts of memory and history, as well as their respective transformations and interpretations.

The exhibition, which will occupy the Laboratorio 987 and part of the MUSAC facilities, and whose parallel activities will take place in the Museo de León, is not intended as an exhaustive or definitive project on these themes, but an exercise, a species of outline that explores, above all, the interest of some contemporary artists in the construction and deconstruction of culture, its genesis, contexts and determining factors.

About the artists
Alexander Apóstol
Barquisimeto, Venezuela, 1969
The multidisciplinary artist Alexander Apóstol has developed his work in media such as photography and video, through which he has explored themes like memory, the body and identity. His projects have incorporated urban settings and popular iconography to conceptually investigate politically pre-established social archetypes of gender. Apóstol employs irony and humour to question the human condition in contemporary society. In recent years his work has dealt with the process of dismantling Latin American modernity, employing for this purpose urban images that touch on and reinforce this theme.

Simon Fujiwara
London, United Kingdom, 1982
Embracing several formats—performances/conferences, fictitious publications and collections of diverse articles and objects—the recent projects of the Berlin-based artist Simon Fujiwara (1982) are shaped by gathering more or less plausible pieces of evidence. Each of these unearths an implicit myth about human origins and an explicit sexual archaeology, weaving a set of narratives that take us from man’s common past to Fuijwara’s recent personal time and his family history. With a British mother and a Japanese father, the artist has developed an art practice around his own origins and the carefully constructed borderlines between ethology, eroticism, architecture and ancestry, by writing and rewriting histories, biographies and gay porno stories that are as credible and crafted as a treatise on palaeontology. (text by Latitudes, curatorial office)

Fran Meana
Aviles, Spain, 1982
After graduating from the University of Vigo with a degree in Fine Arts, he moved to Barcelona. His most noteworthy exhibitions include 1 1, Museo Abetlló, Mollet del Valles, Barcelona (2008),Descarga Discográfica, Sala de Art Jove, Barcelona (2008), Proyecto de una contingencia, CGAC, Santiago de Compostela (2007), BAC07: Babylon, CCCB, Barcelona (2007). Meana’s production is intended to generate the illusion of a possible re-appropriation of the symbols of power in order to subvert them. By investing them with domesticity and an ephemeral quality he aims to strip them of their sacred facet and thus restore their everydayness.

Moris (Israel Meza Moreno)
Mexico City, Mexico, 1978
Israel Meza Moreno is a “social sculptor” who takes the belongings of destitute people living in the city and manipulates them in order to return them and contribute to improving the beggars’ living quarters. Among his most notable actions and experiments are his “borrowing” a mattress that a vagabond was using as a shelter from the cold and intervening on it in order to give it back to him converted into a sleeping bag, or gathering strips of wood and placing them in the form of a precarious refuge that ended up turned into a home, since the homeless placed their scarce belongings inside the spaces delimited by the creator. To produce his pieces, the Mexican artist always uses objects found in the neighbourhoods—such as pieces of metal, cardboard or used bottles. For this reason Kramer sees a certain connection between his work and that of Gabriel Orozco. His pieces also show an evident kinship with Arte Povera.

Warren Neidich
New York, NY, USA, 1962
An artist born and living in New York, he has been a guest artist at Goldsmiths Collage of London and at the Cooper Union for Art and Science of New York. He currently has an ACE-AHRB Arts and Science research grant from the British Council. He has forthcoming exhibitions scheduled at the Kunstverien Potsdam of Germany, Buero Fredrich of Berlin and the Edward Mitterand Gallery of Geneva, Switzerland. In 2002 he had a solo show at the California Museum of Photography in Riverside (California); the Muller de Chiara Gallery of Berlin (Germany); The Storefront for Art and Architecture in New York; and Edward Mitterand Gallery of Geneva (Switzerland). His upcoming solo shows will be held at the Kunstverein Potsdam, in Postdam (Germany), and at the Muller de Chiara Gallery. His book Blow-up: Photography, Cinema and the Brain, co-produced by the Ford Foundation and DAP, presents an introduction by the art historian Norman Bryson. He is cofounder of artbrain-org, a website on art, writing and film related to the brain.

Diego del Pozo
Valladolid, España, 1974
Diego del Pozo’s work is articulated around his preoccupation with love and desire and how these feelings, which seem to be related to the intimate experience of the subject, are actually determined by our social environment, spheres of power and methods of production. His art is based on the idea that the mechanisms of social control are interiorized by individuals, showing the fissures in which these tools of power conflict and provoke contradictions in our selves. By using apparently naive techniques and media—drawings, music boxes, videos or board games— he confronts us with a reality in which our desires, assumed to be something private and of our own, are unmasked as constructions that lead us to consumption or social control. Del Pozo earned a degree in Fine Arts from the University of Salamanca in 1997 and his work has been shown in institutions such as ECAT of Toledo; the Centro Cultural Montehermoso (Vitoria-Gasteiz); the Centro de Arte Contemporáneo of Salamanca, DA2; and the Centro de Arte Joven of the Community of Madrid.

Pedro G. Romero
Aracena, Huelva, Spain, 1964
The career of Pedro G. Romero (Aracena, 1964) comprises elements ranging from painting and drawing to the organization of courses and workshops, including photography, video, playwriting, recording musical documents, and publishing books and theoretical and literary texts. Archivo FX, a community project based on a set images of iconoclasm in Spain between 1845 and 1945 as a different way of seeing history and tradition in perspective, endows his art with a different autonomous framework in which to move. His latest works for Archivo F.X. include the production at the Fundació Antoni Tàpies of the project La ciudad vacía: (2005-2007), and, more recently, his contribution in the first issue of Archivo F.X. Documentos y materiales, an informative newsletter about all the works of the archive that appeared in the project Heterotopias, di/visions (from here and elsewhere) curated by Catherine David for Thessaloniki (2007).

María Ruido
Orense, 1967
A video-maker, researcher and cultural producer, since 1996 she has been developing interdisciplinary projects on the social creation of the body and its situation in work-related constructs, as well as on the mechanisms of building of memory and its relation to the narrative forms of history. She currently lives in Barcelona, where she is a Professor in the Design Department of the University of Barcelona, and where she belongs to several study groups involved with representation and its contextual relations.

Danh Vo
Vietnam, 1975
Voh was born in Vietnam but raised in Denmark. In her installations she relates aspects of her eventful life to aspects of war and the history of colonialism. Her work explores the invisible borders between public and private, and the possibility of porosity between the two realms. Vo undermines the establishment (she curated an exhibition of works by recognized artists in her parents’ home in Copenhagen) as well as the personal (she got married to and divorced from numerous people, supplementing her own name with those of her spouses yet without sharing a personal or romantic life with them).
Danh Vo (b. 1975) graduated from the Royal Academy of Fine Arts of Copenhagen and the Städelschule of Frankfurt. She currently lives and works in Berlin. In 2009 she was artist in residence at the Kadist Art Foundation (Paris). In 2008 she showed her work at Manifesta 7, Rovereto; the Triennial of Yokohama; Docking Station, Stedelijk Museum (Amsterdam), among others, and in 2009 at the Gebert Stiftung für Kultur (Rapperswil).
www.musac.es