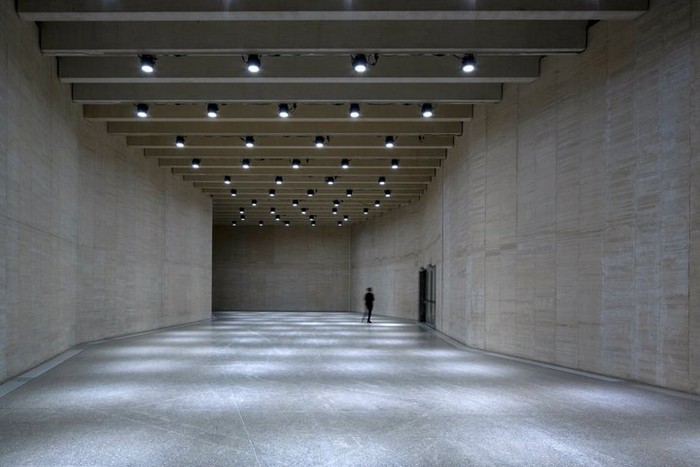 Starting 29 January 2011, MUSAC’s Gallery 1 will feature Un modo de organización alrededor del vacío. Brumaria Works#3 Expanded Violences. This exhibition is a continuation of the work in progress during recent years by Brumaria, a platform/publication, research and analysis space and artistic endeavour. This multi-format project focuses on the relationship amongst art, war waged on multiple fronts, and terrorism. Brumaria Works#3, a site-specific project for MUSAC, opens this field of analysis to new registers and seeks to give body to these same concerns regarding our contemporary life—besieged and in a state of war.

The outcome of years of delving into this relationship (art—war-on-many-fronts— terrorism) is a series of incursions: Arte y Terrorismo (Art and Terrorism), Iconoclastia- Iconolatría (Iconoclasm and Iconolatry) and now Expanded Violences. Through myriad projects: research, exhibitions, artwork, seminars and publications, they bear witness to the width and breadth of the subjects dealt with and the conceptual, thematic and discursive void still apparent in Art on a global scale.

Expanded Violences is therefore a comprehensive proposal, a work in progress first expressed artistically through Brumaria Works#1 and carried out within the framework of Manifesta 8, the European Biennial of Contemporary Art, in Murcia and Cartagena (9 October 2010 - 9 January 2011). Brumaria Works#1 is a two-fold presentation comprising an installation and a body of texts. The piece, housed in two prison cells at the old San Antón Prison in Cartagena, recreates the chaotic experience of contemporary life and the media’s contribution to it, using the physical experiences of hot and cold and total visual and sound saturation.

Along with the installation, the first collaboration between Brumaria and MUSAC has produced a reader, a special body of Brumaria texts in English and Spanish to be given out free of charge to those attending the Biennial.

Un modo de organización alrededor del vacío. Brumaria Works#3 Expanded Violences, springs from the second phase of collaboration. The piece was created specifically for MUSAC in a joint effort to open this field of analysis to new registers and give body to these same concerns regarding our contemporary life—besieged and in a state of war.

Brumaria Works#3 sets forth an analysis where violence is presented as the real, the symbolic and the imaginary; that is, it likens it to Jacques Lacan’s triad, where this triangulation and the generic framework of psychoanalysis serve as an essential reference point from which a theoretical context can be created. In this scenario, the piece, according to Brumaria, would be the transformation of the sensitive into idea-in-action, starting from a true idea and the understanding of truth as one so infinitely multifaceted it is capable of bringing things into the subjective realm.

Expanded Violences, Brumaria Works#3 triggers a process of subjectification where the void, nothingness, provides the raw material from which to make a break with the subject’s reality, rendering it dumbfounded; a state which, to quote Brumaria, is symbolic and seeks to bore a hole through that which is real in a being. Art would be, then, a sort of order around that cavity; and the light would represent that which is symbolic as the being’s primal contribution.

This piece is shown in MUSAC’s Gallery 1—a hall which can be accessed independently from other exhibitions. It consists only of a body of light and stands as a blurred border, suggesting an indoor-outdoor ambiguity. The light—or rather the absence thereof— suggests a type of Möbius strip where the void, the impossibility of a reality or the creation of a non-referenced reality bores a hole outside the universe. This void generates the prospect of filling it; which occurs through the use of a white light that awakens and irritates the viewer.

The piece wraps up with theoretical and audiovisual material: videos and lectures by psychoanalyst Jacques Lacan, together with his most relevant publications, in Spanish, for the public to browse through. A guidebook has been published to serve as supporting theory, introducing the essential terminology and fundamental theoretic references of psychoanalysis. This provides the public with the means to better comprehend the piece. Additionally, a debate session will be held to further analyse the subjects and references covered in Expanded Violences.

Mindful of the other exhibitions running parallel to it at MUSAC, their creators and
contexts—the work of Georges Adéagbo, Gervasio Sánchez and Akram Zaatari— Brumaria Works#3 Expanded Violences is put forward as a suggested space, a project which seeks to be neither implicit nor explicit, navigating vague outlines of expression where ideas operate more on evocative planes than in explicit ways. The metaphor as producer of reality thus strives to complete a heterogeneous comprehensive discourse able to generate its own spaces for thought.

On BRUMARIA
Brumaria is an artists’ project focused on the construction of a space for studying, reflecting and developing proposals, whose aim is to circulate both theoretical and practical materials relative to artistic and aesthetic ideas and their relation to the social and political structures inherent in them.

The publication, initially a journal, has evolved into fourteen important titles to date. From number four on, each issue focuses exclusively on a highly relevant subject, such as video, art and politics, net art, Documenta 12, amongst others. Brumaria has participated in the Manifesta 8, the European Biennial of Contemporary Art, in Murcia and Cartagena with the project Brumaria Works#1.

Darío Corbeira, Editor of the journal, lives in Madrid. He is an artist and professor at the Fine Arts Faculty, University of Salamanca, where he teaches Art Spaces and Alternative Artistic Means. He began his career at the end of the 1960’s. He uses a variety of media to give shape to his conceptual work, which has been shown in Spain and abroad. He has authored the book Construir... o reconstruir, una selección de textos sobre la obra de Gordon Matta-Clark. He authored Comer o no Comer, curating this exhibition, film and editorial project about the relationship between food and hunger in 20th century art. He publishes critical essays in various journals and publications, and has lectured at various universities in Spain, US, Canada and Germany.
www.musac.es