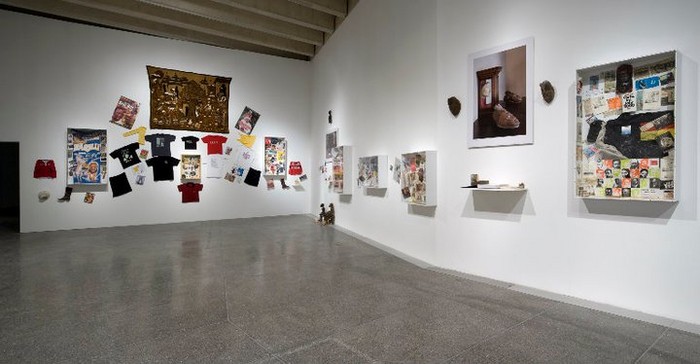 MUSAC, Museo de Arte Contemporáneo de Castilla y León, presents The Mission and the Missioners, the first solo exhibition in Spain of Benin artist Georges Adéagbo (Benin, 1942). This show, which is curated by Octavio Zaya, display the intercultural and inter-textual “assemblages” of this key figure in contemporary art from Africa and the international art scene.

Adéagbo’s working method is always based on the selection and combination of objects, sources of information, and references, which include sculptures, paintings, objets trouvés, his own hand-written notes, texts, books, magazines, photos, and textiles that he commissions, collects, or finds in Cotonou (Benin), where he lives and works, and in the areas around the places where he presents his exhibitions. Once the subject or theme of the exhibition is decided, Adéagbo spends months of research in his archive, and he requires spending enough time before he opens an exhibition at a given location, in order to compare his research with the direct experience of the conditions and circumstances of the place. Then he complements the set of texts and objects brought from Benin with pieces from that particular environment.

Adéagbo’s work is not so much about plurality (of objects and texts) as it is about the difficult problems, complexities, and negotiations of accumulation and consumption, translations and transformations, relationships, proximities, and displacements. Although Adéagbo is well aware of the specific nature of the objects and diverse elements he uses in his “assemblages,” he effects a general transformation, by placing them in new contexts, establishing new frames of reference, and offering a different story. His “archive” of recovered and selected objects is in a state of constant translation and transformation. The relationships of the objects and diverse elements Agdéabo uses stand as some sort of position or idea that implies that “difference” is not simply about what fits into one’s sense of what is indigenous or foreign, from home or from abroad. Difference emerges from the blurring of boundaries, from the proximity of objects, at the point at which these spatial and temporal processes become sites of interpretation from an aesthetic, political or ethical perspective. Generally, a central theme connects all the elements of the “assemblage” with the way the execution of the installation is designed, while time marks the tension between the visual and the verbal; objects that cover walls and invade floors, involving the vertical and horizontal in the experience of the spectator.

Adéagbo sees himself in the communitarian role of the artist as much as in the role of “missionary,” thus, the language of his contingent stories and his enigmatic enunciations are about carefully elaborated parables, native and formative myths, and metaphysical metaphors. As a result of this, and through the creation of a thickly-woven, symbolic web of events, Adéagbo illustrates the universality of the laws of nature that govern life everywhere, while simultaneously revealing the diversity of existing conditions in a given place.

About Georges Adéagbo (Cotonou, Benin, 1942. Lives and Works in Cotonou)
The eldest of eleven brothers, he began studying Law and Business in France, but was forced to abandon his studies and return to Benin after the death of his father. Leaving behind his French girlfriend and a promising career, in 1971, against his will and held back by his mother, Adéagbo took on the responsibility of head of the family. Frustrated and disoriented, faced with the traditional form of Beninese life that his social environment tried to impose on him, he began to reflect upon destiny and nature, creating “constellations” in his garden, in which he combined objects taken from daily life with original texts written by him After working in solitude for 23 years, he was invited to present a first show of his work in France. Ever since then, he has had exhibitions all over the world, including the United Nations Palais des Nations, the Serpentine Gallery in London, the Round Tower in Copenhagen, the 2nd Johannesburg Biennale, the 24th Sao Paulo Biennale and the 48th and 53rd Venice Biennale and Documenta 11, Kassel.
www.musac.es