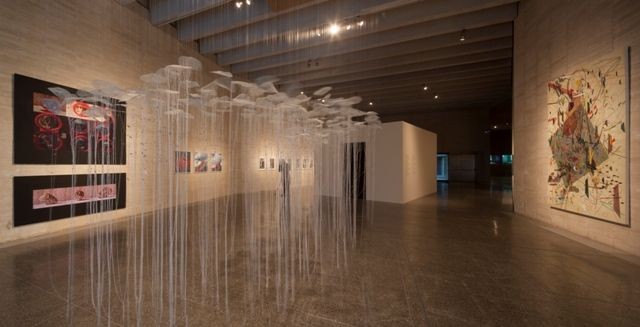 These days, from a postcolonial perspective, we are witnessing the appearance of a series of enunciative territories explored by a diversity of proposals that undermine conventional forms of hegemony and of a series of representational spaces that do not respond to imposed dichotomous categories such as I/other or hegemony/subalternity. As a result, places that re-articulate new "maps", new locations and epistemologies contributing to the removal of the categories that relegated some cultures to the marginal space of the denied by the so-called "superior" modern Western forms are taking hold. It is in this spirit that the project Lucy’s Iris which includes an extensive exhibition curated by Orlando Britto Jinorio, two film series organized by Beatriz Leal and Guadalupe Arensburg, and a cycle of conferences led by Sabrina Amrani and Orlando Britto Jinorio, comes about. This project aims to expand our knowledge and our vision, hence the use of the metaphor of the ancestor of the genus Homo’s iris, called Lucy.

The most relevant species of genus Australopithecus, long considered the oldest in the world, is the Australopithecus Afarensis, generally known as Lucy since its discovery by a team of anthropologists led by Donald Johanson and Tom Gray in 1974, in the eastern region of Afar, Ethiopia. It was the teenager’s skeleton of a female hominid of approximately a meter in height, with short legs, weighing about thirty kilos, and that walked upright. For decades it was the missing link in human evolution, the grandmother of humanity with an age of approximately 3.2 million years.

Lucy owes its name to the incidental fact that, apparently, at the time of its discovery the famous song of The Beatles Lucy in the Sky with Diamonds was playing on the radio. Why not have chosen names like the great Sabla Wangel of Ethiopia, Hatseput, Nefertari or Cleopatra of Egypt, Makeda of Sheba, Candace of Meroe, Dahia al-Kahina of Mauritania, Amina of Hausaland, Del Wambara of the Adal, Nzinga of Angola, Beatrice of Congo, Manthatisi of Lesotho, Nandi of Zululand, Ranavalona of Madagascar, Yaa Asantewa of Ghana or Nehanda of Zimbabwe or many other names of relevant women of the very numerous and rich cultures of Africa?

They could have found countless names of important African women, but the anthropologists decided to call her Lucy, which exposes, once again, the arrogance of the Western gaze, unable to embrace the historical and cultural references of the rich spaces that the West has "occupied and investigated" because its only aim is to justify and reaffirm its existence and its univocal vision of the world, inexplicably putting aside other immense and rich cultures. In the decade of the 70s, anthropology was not, therefore, apart from the colonial Western thought system, despite the process of independence and decolonization which was currently spreading throughout the African continent. Shortly after, Lucy was renamed in their own language by the Afar people from Ethiopia as Dinknesh, which means "you are wonderful". At this point, then, we want to vindicate Lucy being called Dinknesh or another among the many possible names of women from the African continent who have had and have a key role in the construction and articulation of African cultures and societies.

Why did the anthropologists have to remove that hominid’s connection to her own context? Why should they be allowed to steal her identity, her gaze or, ultimately, her iris? And then, which would Lucy’s iris, her authentic iris, her real gaze be?

We take this fact of historical theft as a departure point to propose the project Lucy’s Iris, which symbolically returns to Lucy, the teenager-grandmother of mankind, her own gaze through the eyes of a selection of major African contemporary artists and their contribution and commitment to the cultural construction of the continent. Lucy’s Iris tries to explore and show different spheres of African contemporary creation through the selection of works and proposals of a score of creators who both live and create in Africa and in the diaspora. Through their diversity, we can understand complex and varied facets of that different cultural space—Africa. All of these creators play an active role in the current artistic and cultural scene, both in Africa and in the international arena, understanding the latter in its most universal sense.

The various artistic practices—which include installation, photography, video, painting, drawing and sculpture—of the twenty artists selected for this project, who come from multiple and different contexts, address issues of gender, identity, ethnic group, body, borders, territory and environment, history, memory, politics, tradition and present, feminist, colonial and postcolonial issues, migration, displacement, daily reality, future challenges, the need to maintain traditions, the experience of exile, the weight of traditions, the role of women... Through their works, we will be able to get to know and come closer to the construction of a particular "map" of the different conceptual, formal and existentialist territories inhabited by the artists of this continent. We can also discover the multiple irises of Lucy or Dinknesh, which are as many as the artists in this exhibition and the women who, day by day, build this rich, broad and diverse cultural fabric called Africa.
www.musac.es