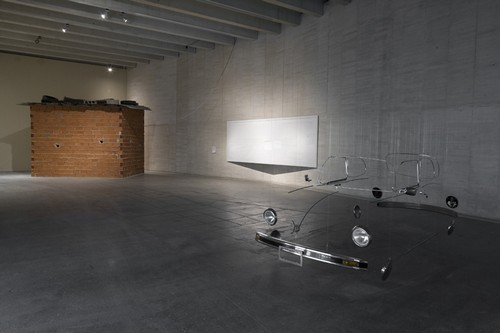 From 26 June 2010 to 9 January 2011, within its 5th Anniversary programme, the Museo de Arte Contemporáneo de Castilla y León will be devoting its entire exhibition space to a major exhibition displaying most of the pieces by over 40 Latin American artists held in the MUSAC Collection. Under the title MODEL KITS. Thinking Latin America from the MUSAC Collection, the show curated by Agustín Pérez Rubio (MUSAC Director), María Inés Rodríguez (MUSAC Head Curator) and Octavio Zaya (MUSAC curator at large), invites viewers to trace their own course through contemporary Latin American art, over a layout designed by architect Andreas Angelidakis. In parallel, all activities scheduled at MUSAC between June 2010 and January 2011 will focus on Latin America, including new projects at Laboratorio 987 and the Showcases, artist workshops, publications, seminars, performances, concerts, etc.

MODEL KITS is the Museo de Arte Contemporáneo de Castilla y León’s fourth major exhibition of its Collection works, after Emergencias (April – August 2005), Fusion (December 2005 – April 2006) and Existencias (September 2007 – January 2008). The show will also be the first chance to see many of the MUSAC Collection's latest acquisitions made between 2007 and 2010, all of which are included in the book MUSAC Collection Volume III, to be presented on 26 June.

MODEL KITS. Thinking Latin America from the MUSAC Collection draws its inspiration from 62/ A Model Kit, a novel published by Julio Cortázar in 1968, which stands as one of the most enduringly original and ambitions projects in Spanish-language literature. Translating it into a different period and discipline, the exhibition modestly attempts to apply the unique novel's vision in the way it rejects and subverts any single interpretation or conventional linear narrative of the works on display, challenging the viewer to establish her own parameters and directions, connections and relationships. MODEL KITS includes around 100 works by over 40 Latin American artists, produced since the late 1980s (under the MUSAC Collection's purchasing criteria), covering a broad range of media and languages, artistic strategies and significations, references, objects and situations, which jointly contribute to assembling varying narratives and permutations. From leading deceased artists who hold pride of place in Latin American Art History like Ana Mendieta, Leonilson or Maria Teresa Hincapié; to great masters such as Luis Camnitzer, Oscar Muñoz or Miguel Angel Rojas; the landmark 90s generation of Valeska Soares, Rosângela Renó, Jorge Macchi or Carlos Garaicoa; all the way to young artists who are making their mark on the current landscape, such as Mario García Torres, Julieta Aranda or Matías Duville, amongst others.

MODEL KITS challenges the viewer to take the part of an active and liberated reader who writes her own score, creating a new narrative. Under this perspective, the exhibition's varied elements can be combined and analyzed according to the concerns and references each viewer brings to bear. The exhibition does not therefore adhere to a central theme or nucleus around which to develop a privileged narrative. While it may be said that the works' diverse perspectives and languages reflect a critical perspective on society and its relationships with other contexts, the exhibition brings together discourses and approaches that are personal and philosophical, urban and political, literary and artistic, etc., to the point that they cover each and every one of the undercurrents defining contemporary art as it is made anywhere in the world, whether it be Paris, Tokyo, Ohio or Bogota. In this sense, the exhibition is projected as an infinite ars combinatoria, not limited to the featured artists' Latin American geographical and cultural sphere, but aspiring to establish varying and contrasting readings and conclusions, wavering patterns and ambiguous hints, unresolved questions and diverging paths, like a labyrinth with no exit.

Reality and fiction, surprise and mystery, humour and pain go hand in hand, setting a pace marked by a set of events in no specific order, defined alternatively by logic or by intuition; by action or by contemplation; by the material or the spiritual. In its diversity, the exhibition invites us to think of Latin America as a project in progress, laden with endless possibilities; a project with no constraints in space or time, multifaceted and open to different worlds; a project that expresses its artistic interest in what is shared and collective through 'singularity' as opposed to identity. A model kit waiting to be assembled.

On the book MUSAC Collection Volume III
The Museum initiated its effort to establish a catalogue and graphic repertoire of all the works held in its Collection five years ago with Volume I. Volume II followed two years later, and now Volume III will mark the Museum's 5th anniversary.

The series, to be completed with a further two books in the next five years, aims to provide the general public with a tool to access the full range of works gradually added to the collection, particularly through its own exhibitions and projects.

Adhering to the format established in the first two books but with a radically different design, Volume III includes works by 64 international artists, all documented in photographs and backed by texts written by leading international critics.