Para ser construidos (To be Built) 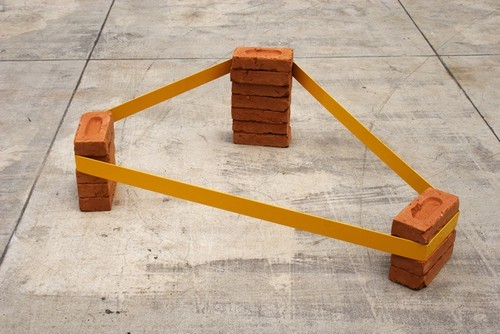 PARA SER CONSTRUIDOS (TO BE BUILT)

On June 26th the MUSAC’s Laboratorio 987 will be presenting the project Para ser construidos (To be Built), a group show whose concept embraces the double conceptual and linguistic aspect of the term “construction” to exemplify a relation with urban factors on the one hand and considerations of identity on the other. The artists participating in this show— Marcelo Cidade (Sao Paulo, Brasil, 1979), Marcius Galan (Indianápolis, US, 1972), André Komatsu (Sao Paulo, Brasil, 1978), Nicolás Robbio (Mar del Plata, Argentina 1975), Carla Zaccagnini (Buenos Aires, Argentina, 1973)—arise from the Brazilian context, yet the show is not intended as a vision of the current Brazilian art scene. It is a reflection on the construction of certain concepts of identity, in art as well as in the urban setting. This show is based on the relations between art and society, and therefore between art and politics. Para ser construidos will be on exhibit within the framework of the show Model Kits. Thinking Latin America from the MUSAC Collection, on the occasion of which, June through December 2010, the entire programme of exhibitions and activities at the Museo de Arte Contemporáneo de Castilla y León will be focusing on Latin America.

This show is inspired by some of the essays and letters that the artist Hélio Oiticica (Río de Janeiro, 1937 – 1980) wrote following his neo-constructivist period. Oiticica aspired to radicalize his art production, seeking greater political involvement by establishing links between fine art and popular culture. In some of these essays Oiticica rejected the idea of national representation, which he considered out-dated, and he accepted that artists were destined to representing themselves through their work and their actions. In other cases, the Brazilian artist addressed the project of artist’s transformation into an advocate. For Oiticica it was not enough that the artist should simply pursue a new experience in relation to art; it was also necessary to invite visitors to experience that transformation of art. In this sense, he was not interested in the “merely conceptual positions”. For him, to develop a proposal associated with a concept meant to put that concept to the test, as a process and endless possibility, as an open-ended structure.

To me the concept is a phase, like the sensorial, the environmental, etc., which are ultimately concepts as well; to me what seems wrong about treating the concept as the artistic object-purpose is that it ends up being redundant, closing in on itself; when I approach a project it is really to be constructed; I am not satisfied by the recognition of its possibility. (Letter to Aracy Amaral, May 13th 1972). The show To be Built is presented in times that are very different from those of this artist from Rio de Janeiro; today Brazil is not the same as it was during the 50s and 60s. It is currently among the great “emerging countries”, with a president leading the change in image of a nation that is the centre of attention abroad, although its image has yet to be constructed. In this light, who is constructing its social and political situation, and what part of it remains to be constructed? Into what direction is this country headed into modernity? What are its identity traits for the future? Can and should skyscrapers coexist with favelas and asphalt coexist with earth in the same city? Who is to construct its identity?

Megalopolises like Sao Paulo, Rio, and Bahia are permanently under construction. Precisely this same situation is the ground on which Para ser construidos originates. The artist-advocates draw on the city, the street and their everyday experience to create their works and conceptual platforms, which are part constructions part projects. But, as with Oiticica, here no trace of the project remains as mere possibility other than its own execution, its own construction, making, re-thinking, and reacting. In this regard, this project indistinctly explores two aspects of construction, one which touches on the condition of what makes up identity and the other construction strictly speaking, in the broader sense, and its relation with the urban environment.

This show thus intertwines a critical view of the very idea of the construction of identity; in the same way that in Oiticica’s work the artist does not represent anything but himself and his work, in Para ser construidos, although the five artists come from the Brazilian context (specifically the Paulista area), it is of note that two of them are Argentineans and another is Brazilian-Japanese, thereby avoiding any type of representation of art from Brazil, or any scene within it. Hence, the intention of this project is to re-examine certain notions about art, the construction of identity and, in short, the relations between art and society, and therefore between art and politics.

Accordingly, the curator’s premise is to create an exhibition where the set of pieces by the different artists may construct an installation, so that the dialogue between them may enable visitorparticipants to feel that they are in a space under construction, where the bricks, the scaffoldings, the half-hung pieces, the cement and the spades are conceived as potential elements of signification, or where people have to exercise, to introduce themselves in order to render the work (Zaccaganini and Robbio). From small elements of the city under neo-concrete assumptions (Marcius Galan and Cidade) to environmental assumptions, and those of co-existence (Zaccaganini), to the city and its materials (Komatsu), and the relations between abstraction and the urban setting (Robbio), as a whole the show raises questions about the idea, the moment and the representation of identity, while also playing with the relationships of individuals in the city, with the city itself and with each other.

The entire project will be situated within the architecture of the Laboratorio 987, but it will also leave this space so that it can construct other links, other connections with the public. Thus, the piece by Carla Zaccaganini, Reação em cadeia com efeito variable, will be shown in the outdoor garden of the museum. This work, produced in collaboration with the Sao Paulo Biennial Foundation for the gardens of Ibirapuera Park, within the framework of the 28th Sao Paulo Biennial, will allow visitors to the MUSAC to consruct as a group, in a joint action.