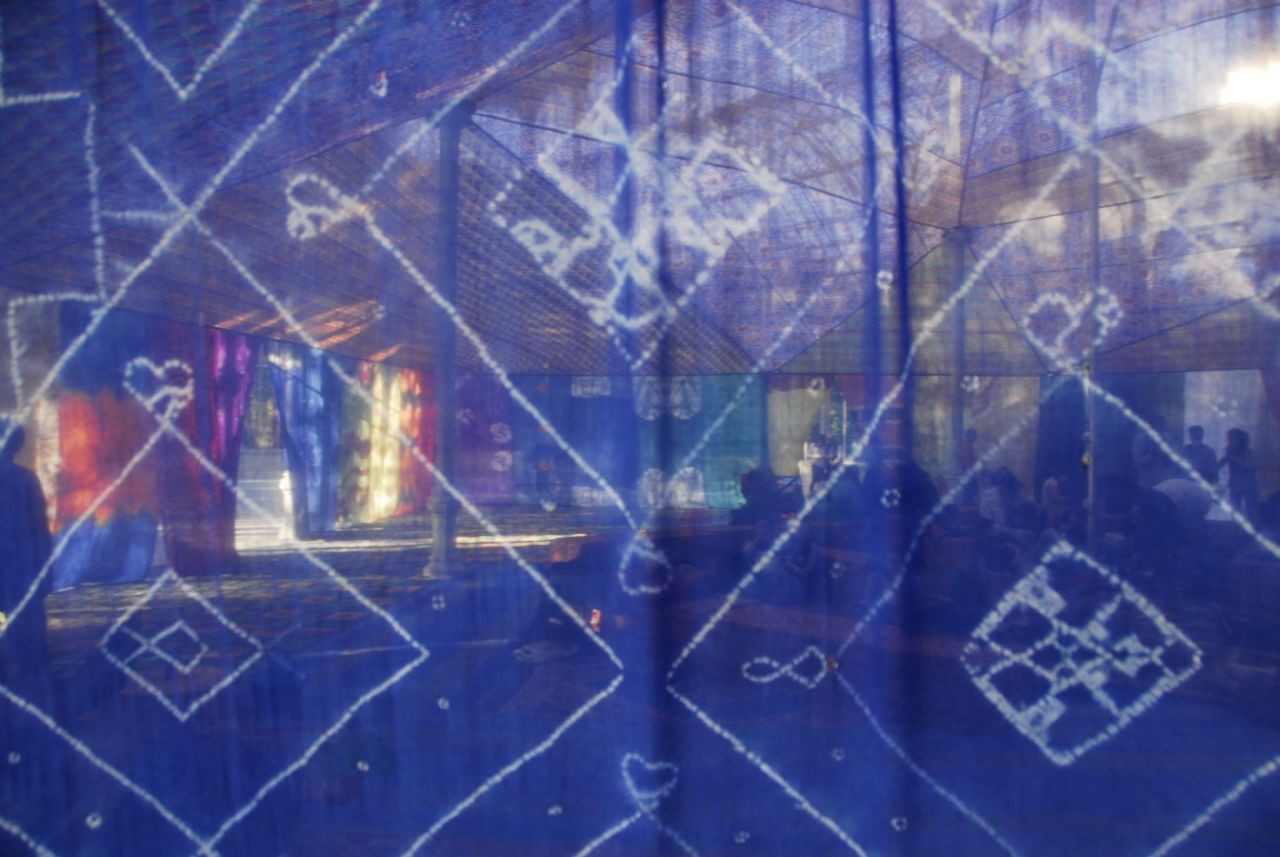 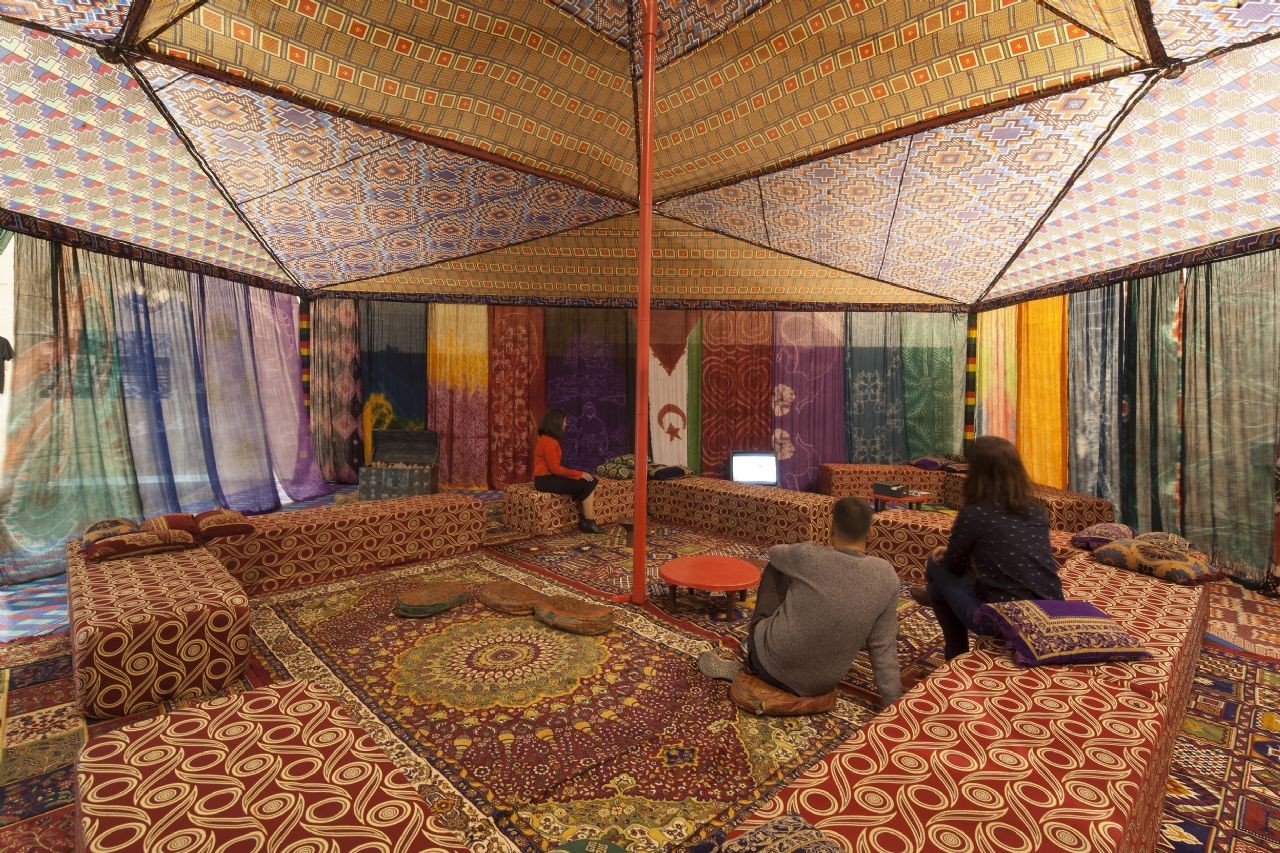 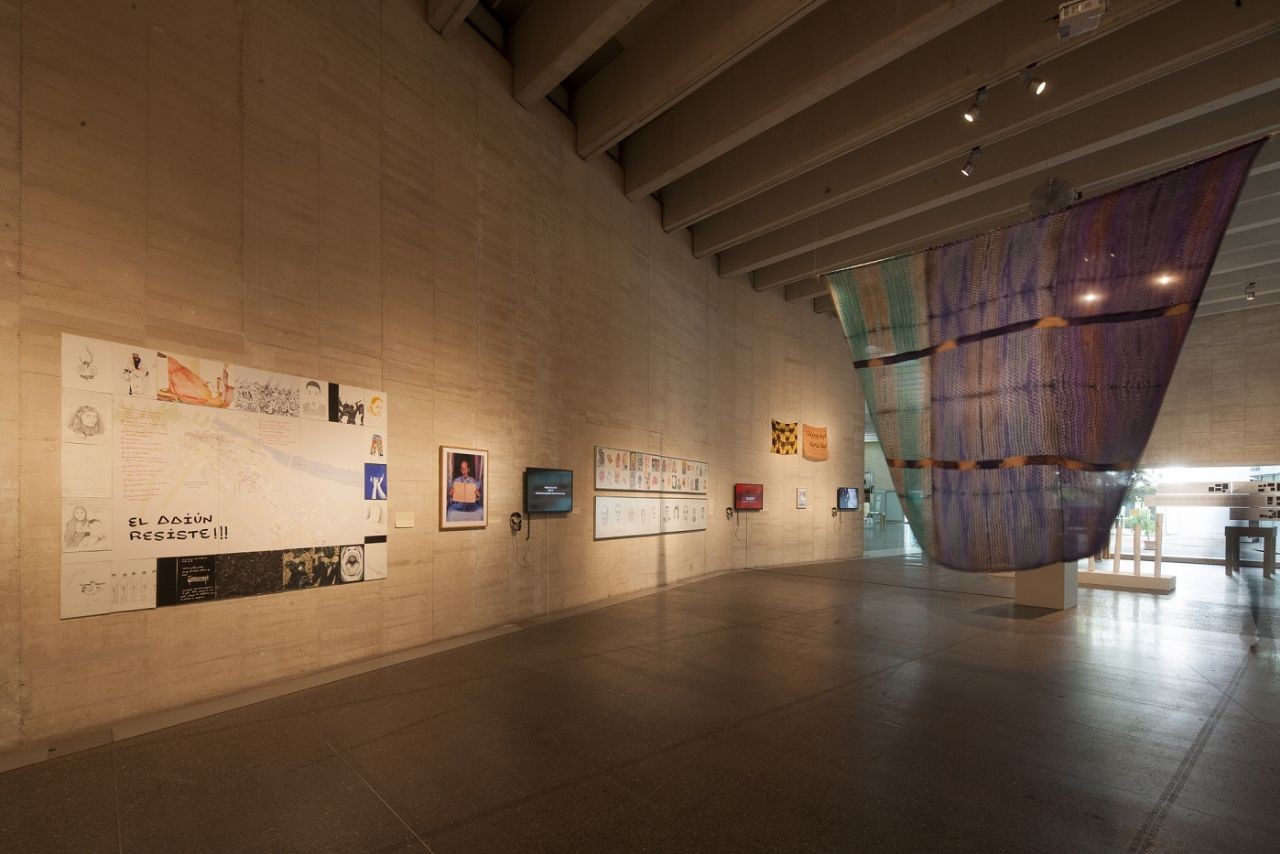 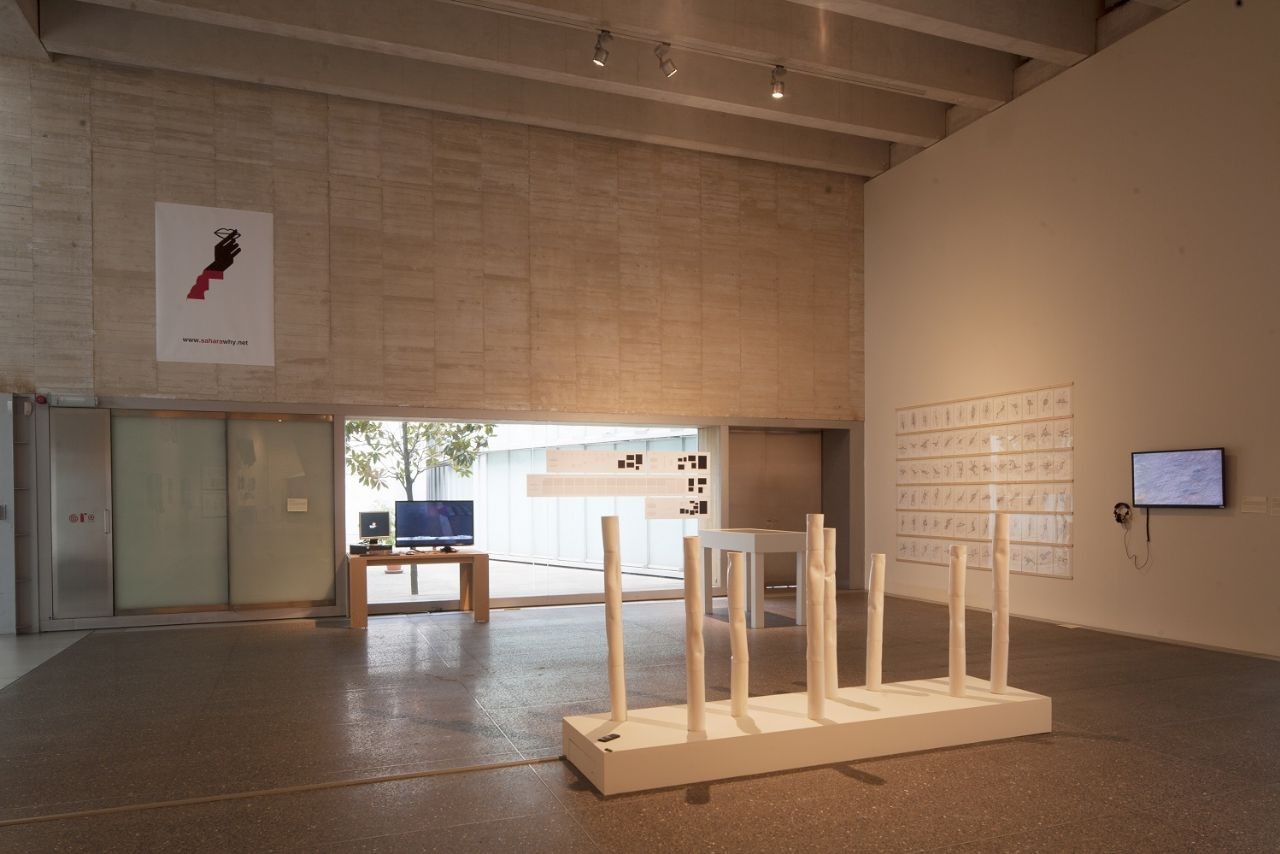 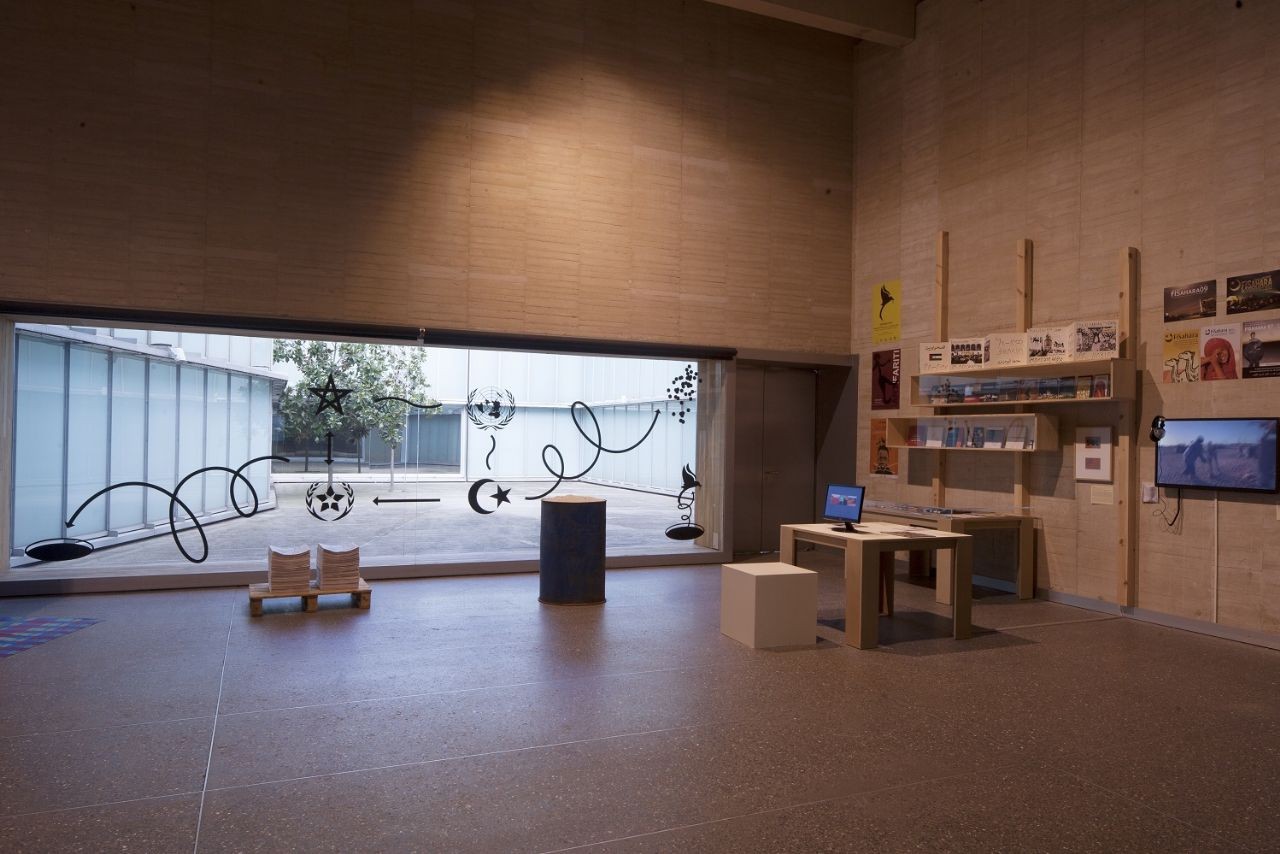 Provincia 53. Art, territory and decolonization of Western Sahara is a selection of art and culture on the region known as the Western Sahara which reflects on this conflict from the aesthetic, educational and political meanings of the concept of territory. In 1961, the so-called Spanish Sahara became a Spanish province, number 53. In the face of UN demands to decolonize the territory, the government of the Spanish dictatorship was trying to legitimize its occupation by converting it from a colony into a province. In 1974, Spain announced its withdrawal as well as a referendum which never took place. Following dictator Franco’s death and the organization of the Green March, the Western Sahara was invaded by Morocco and Mauritania. The creation of the Sahrawi Arab Democratic Republic (SADR) was unable to stop the invasion. An armed conflict with the Polisario Front, legitimate representative of the population of the Western Sahara, erupted in 1976 and would last until 1991 when the UN declared a cease fire and deployed the MINURSO (UN Mission for the Referendum in Western Sahara). The Baker Plan (Peace Plan for Self-Determination of the People of Western Sahara) was presented in 2003 and a referendum for auto-determination announced, which Morocco rejected. In 2010, the “dignity camp”, a peaceful protest to raise awareness of the plight of the Sahrawi people, was begun in Gdeim Izik in the outskirts of the city of El Aaiún. It was attacked and destroyed by the Moroccan armed and police forces, and the event is considered to be the beginning of the Arab Spring. The Sahrawi people have meanwhile been living in occupied territory, in refugee camps in Algeria, and exiled in the diaspora, under conditions of statelessness, maintained by international aid, awaiting the day their lands are returned to them.

Provincia 53 is the first exhibition on modern day Western Sahrawi culture to be organized in a Spanish visual arts museum. With this leitmotif as a starting point, a subjective narrative is created from its colonial past and global present which intends to question the mechanisms of control, power and repression which have taken place in this geographic area from the end of the 19th Century until today. An analysis of the social and cultural realities of the Sahrawi people is carried out through the study of artworks which, at the same time, reflect upon the concept of territory as a portion of the earth’s surface belonging to a community or nation in exile, as well as a field or area of activity. This calls into question the failed process of decolonization which continues in the present day. The chosen body of works intends to go beyond the “metanarrative” built around the Sahara and its epic tale, which has forged a highly ethical and aesthetically charged myth but which holds no critical value.

The exhibition brings together more than 50 national and international artists and collectives through more than 100 objects, texts, documents, archive material and contemporary artistic projects. While the works vary greatly both formally and conceptually, one will notice certain issues coming up repeatedly such as collective memory from a rich oral narrative recorded in sound documents; the exploitation of Sahrawi natural resources (phosphates, minerals and fish stock); the division of territory through the so-called "wall of shame" (which is surrounded by minefields); or, the topic of freedom of expression and the stripping of prisoners’ and missing persons’ of their human rights. At the same time, a series of terms emerge from within the chosen works (tuiza, jaima, daarna, legna, wilaya, daira, hamada, etc.) which, while very significant in the Sahrawi vocabulary, are unknown to the general public.

Provincia 53 is divided into three conceptual and spatial areas: Sahrawi Diagram, Jaima Cultures, and the Narratives of Exile. Artist Sofía Jack has created a large diagram with a timeline and a central matrix where texts and works of art in a variety of media are displayed together with other visual documentation in order to bring the history of the Western Sahara closer to the audience. The installation Tuiza. Las Culturas de la Jaima by Federico Guzmán will be exhibited on one side of the room. The piece is comprised of a nomadic tent or “jaima” made of women’s traditional garments called “melfas”, and serves as a space for hosting exhibition-related activities until it’s over. In parallel, micro-narratives made up of works of art by contemporary creators who reflect on and work with the Sahrawi culture in exile will be displayed throughout the rest of the space and cross-cut the diagram or timeline.

Finally, the exhibition includes a documentation space with works by Sahrawi artists that has been created in collaboration with two festivals that take place in refugee camps in Tindouf: FiSahara, which has organized an annual film festival since 2004, and the ARTifariti organization, which has been holding an annual exhibition of contemporary art since 2007. These have, in turn, led to the creation of the Abidin Kaid Saleh Audio Visual School (2010) and the Sahrawi School of Arts (2012) Camp Bojador, spaces for reflection, criticism and aesthetic Sahrawi action.