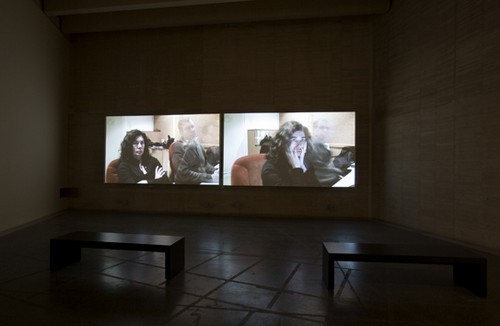 MUSAC to present Retorno a Hansala, an approach to the creative process behind director Chus Gutiérrez’s latest film

MUSAC, the Castilla y León Museum of Contemporary Art, is to present Retorno a Hansala, a take on the creative process behind director Chus Gutiérrez’s most recent film, from the perspective of artists Alfredo Cáliz, Rogelio López Cuenca and Montserrat Soto. The project is to include a piece by Gutiérrez herself - El retorno 1 (2004) - a video installation held by the MUSAC Collection that provided the point of departure for what is now a feature film.

With Retorno a Hansala, MUSAC renews its involvement in the production of alternative forms of artistic expression that define our day and age; in this case cinema. This project provides embodies MUSAC’s experimental drive to embark on new projects and openness to disciplines that are rarely seen within a museum context. The current project focuses on film, just as on previous occasions it was fashion, design or music – an approach that underlines MUSAC’s nature as a “museum of the present”.

On Chus Guiterrez
Chus Gutiérrez (1962, Granada, Spain), film director and scriptwriter. Since her early features films in the early 1990s she has developed a successful career in film, worthy of a number of awards at national and international festivals. She has worked with leading figures on the Spanish film scene, including Joaquín Jordá, Fernando Trueba or Icíar Bollaín. Her filmography includes titles such as Sublet (1991), Sexo Oral (1994), Alma Gitana (1995), Insomnio (1997), Poniente (2002) and El Calentito (2005). Her work deals with the complexity of human relationships on a backdrop of social engagement. Financial independence, discrimination or the frustration born of being an individual within an impersonal and alienating mass are just a few examples of the themes she approaches in her films. Two of her artistic productions are currently held in the MUSAC Collection: El inmóvil viaje (2003) and El retorno 1 (2004). The latter provided the basis for her latest feature film, which is the focus of MUSAC’s current project: Retorno a Hansala, co-produced by Carlos Santurio (Muac Films S.L.) and Antonio Pérez (Maestranza Films).

The background to Retorno a Hansala
Chus Gutiérrez came up with the idea for the video installation El retorno 1 while she was working on her film Poniente (2002), also on the issue of migration. The project kicked off in 2001, when she read an item in the newspaper about a flimsy migrants’ boat that had shipwrecked off the Spanish town of Rota. 37 migrants drowned, of whom 13 were from Hansala, the town that gave the film its name. The families were able to identify the bodies by their clothes and belongings, and the bodies were thus returned to Morocco. This was one of the first instances of illegal migrants’ corpses being returned from Spain. The video installation is a metaphorical journey: the journey home for the corpses’ clothes as remnants of shattered dreams.

El retorno 1 provided the basis for the plot of the feature film Retorno a Hansala, due to premiere in the coming autumn. The film tells the story of Martín (played by José Luis García Pérez), manager of a struggling funeral home, who finds a phone number on one of the boys who died on the Sraights. He gets in touch with Leila (played by Moroccan-born actress Farah Hamed), the dead boy’s sister and migrant worker, who will try to get her brother’s corpse sent home. Martín, spotting the business opportunity, travels home with her, keen on reaping the maximum profit from other families who might identify their loved ones through their clothes and belongings, only to come up against the harsh reality of the Moroccan Atlas region. Retorno a Hansala is the story of a man’s awakening and also of intercultural love and friendship, where two hardened and lonely survivors embark on a physical and moral journey in the course of which they overcome their fears and open up to each other and to the world.

Retorno a Hansala: the project at MUSAC
During the shoot at Hansala, the village that gives its name to the film and now also to the project at MUSAC, creators Alfredo Cáliz, Rogelio López Cuenca and Montserrat Soto crossed the border and brought home the material that served as the basis for the pieces to be shown at MUSAC alongside El retorno 1, in a project that involves the three artists in the process of making the film Retorno a Hansala.

Thus, photographer Alfredo Cáliz will display a series of photographs in MUSAC’s Hall 1 that document the film shoot in the Moroccan mountain village. Rogelio López Cuenca will show Calor Humano, a 3’ 35’’ video that has been used for the film credits. The video combines text with negative images to reflect upon how today we draw our perceptions on our surrounding reality – in this case migration – not from our direct experience, but from representations and interpretations that reach us through the media. Finally, Montserrat Soto will show an installation on two synchronised screens where she inquires into the film’s creative process through the eyes of director Chus Gutiérrez.

The works by these three artists, along with the video installation El retorno 1, will embark the viewer on a far-reaching exploration of the creative process behind a film production in our day and age.

Alfredo Cáliz
1968, Madrid, Spain
Lives and works in Madrid, Spain
Alfredo Cáliz is a photographer who specialises in work for publications. He is a regular contributor to El País Semanal and Marie Claire. He also shoots for NGOs. Cáliz’s pictures adopt a point of view that focuses on the sense of atmosphere. The broad scope surrounding his figures could be seen as a metaphor in itself. His frames are complicit in his intention to withhold judgement: he leaves the field open for the viewer to develop her own path through the image. Alfredo Cáliz’s standpoint is divergent by nature: he takes a step back, and therein lies the personality of his gaze. What could be taken as an attempt to capture a more objective snapshot is in fact an exercise in subjectivity that reveals his approach to the relationship between people and their settings.

Cáliz first travelled to Morocco over a decade ago and has been shooting there since, producing work such as his project Inshallah. Marruecos 1996-2006, an exhibition and publication offering a nearliterary photo essay on present-day Morocco and its cities in particular, where the cultural crossover between Arabic tradition and modern Western influences is most visible. Cáliz reflects upon integration and cultural diversity stemming from migration.

Rogelio López Cuenca
1959, Nerja - Malaga, Spain
Lives and works in Nerja - Malaga, Spain
Rogelio López Cuenca earned prominence in the 1980s as a founding member of the Malaga-based collective Agustín Parejo School. His activities, in the form of actions, mail art, graffiti, publications and a large number of unclassifiable expressions revolving around local issues – Malaga, Andalusia and North Africa – suggested a critical approach to artistic discourse’s ability to confront the challenges of every politics, where the concepts of periphery and difference stand out as the natural agents for an unwavering social engagement.

Since the late 1980s, and working with a semiotic discourse “characteristic of low culture”, López Cuenca ties in his criticism of the iconisation of public information, poetic signals and found objects with an analysis of the simplification and dictatorship of meanings affecting today’s visual culture. Through work rich in paradoxes and humour, which ranges from graphic interventions in public spaces and institutions to publications, video and 2-D and graphic work, linguistics, visual poetry and an allegorical play on images and words, he attempts to provoke new interpretations in the viewer regarding the language of power and the power of language. What we see and how we look are the two major questions that hang over the work of this Malaga-based artist permanently engaged in a witty re-reading of the images that are an integral part of our everyday, our stories and culture. He achieves this precisely by decomposing images, discourses and messages and building new semantic structures that suggest other readings of reality and its forms of representation.

Montserrat Soto
1961, Barcelona, Spain
Lives and works in Barcelona, Spain
Montserrat Soto, whose successful career over the past 15 years has established her as one of the key figures in Spanish art today, works along two parallel lines that she develops in the fields of photography and video. On the one hand, she works on what she describes as “art spaces”, a project initiated in 1994 that consists of a number of series devoted to an analysis of spaces related to the art world, from museum vaults to collectors’ homes, through a broad range of projects documenting all sorts of archives. The other, which she labels “landscapes”, is, in her own words, “work related to travels that are more of an emotional than an intellectual nature”. This line of work is also structured into a number of series that approach landscapes – whether they be ruins, forests, abandoned mines, deserts or seas – in search of their most desolate and chilling perspective. These include her series on greenhouses, a project that stemmed precisely from Chus Guitérrez’s project Poniente. While filming on location, Gutiérrez invited a number of artists to be involved, including Soto, who took pictures that would later be published alongside the film script.

Landscapes, mazes, tunnels or horizon lines are the subjects of her images. The human body is never present, but the proportions and composition are always on a human scale. People, who she observes and also narrates through her photographs and installations, are really the start and end point of her work. Using the distance provided by the camera and the range of tools available for manipulating images, she seeks to underline the conceptual, analytic and reflexive aspect of the spaces she projects.