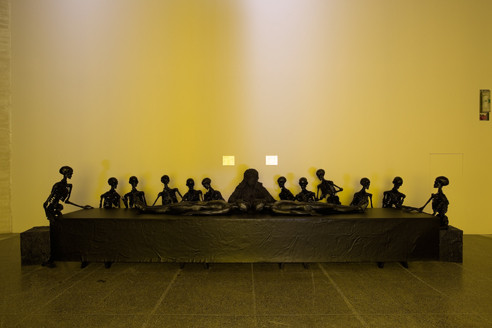 MUSAC to host Love for eternity, a quest into the private universe of Chinese- Canadian artist Terence Koh

On September 27 MUSAC is to unveil Love for eternity, a foray into the unique creative universe of Chinese-Canadian artist Terence Koh (Beijing, China, 1980), where cultures and identities blend with influences from post-minimalism and 1970s body art to create a personal cosmos governed by decadence and deliberate excess, providing the onlooker moments of fragile beauty. This is Koh’s first solo exhibition in Spain, having shown previously in Europe at the Wiener Secession, Kunsthalle Zurich or Frankfurt Schirn Museum; and after his major individual exhibition at the Whitney Museum in New York. Love for eternity will allow the public to revisit the artist’s creative career from his early works signed under the alias asianpunkboy, to the present, with an ad hoc installation created for MUSAC and two performances on the opening night.

Koh’s work is the result of an assemblage of the cultures and identities deeply engrained in this heir of Joseph Beuys’ post-conceptualism, where art and life go hand in hand and where mysticism and religion take on a crucial importance when it comes to appraising varying beliefs within a globalised mesh. Koh is not reluctant to intermixing the broad range of his baggage: on the one hand Asian and transcendental, captured in Chinese opera, ideograms and expressions of an ancestral past; with the newest forms of expression such as music, design and subversive identity games on the other. His work, rich in queer references, acquires a degree of abstraction between two poles where it is not always straightforward to determine whether he is talking about the past or the future, sex or gender, mysticism or hedonism. All of this in an execution defined by secrecy and mystery, masquerade and even numerology.

Koh’s clear references to other artists from the world of performance, such as Man Ray, Marcel Duchamp, Joseph Beuys, Bruce Nauman or Rober Gober place him line with a specific discourse, though he is also influenced by the 1990s exploration of male identity, the so-called Male Trouble, as a poetic revisitation of those forms of expression where the artist stands as an instrument between action and object.

On Love for eternity
Love for Eternity is a vast exhibition, coving over 1200 m2, devoted to a review of Koh’s main works, from those signed as asianpunkboy, up to the present. The viewer will be enticed to plunge into a succession of rooms holding installations whose objects, lighting and composition generate a sense of fragility and whiteness; or their opposites, such as the Baroque black of certain pieces endowed with a compelling visual force. The installations will provide an essentially sensorial experience, where mysticism meets the underground.

On entering the exhibition, opposite the poster designed for the occasion by the artist, the viewer will walk down a corridor leading to Koh’s first installation, The Whole Family (2003). A number of objects, figures and images set around an all-white room bear witness to the artist’s spatial, subversive and sensorial inquiry.

The next room is the exact opposite – entirely black. It holds an installation of new and existing pieces that share the colour black. Bronzes, black hair drums, lamps made out of secret materials, dark vitrines with music that cannot be heard or is “only for butterflies”, a scorched Pinocchio... In addition, the artist will use this room to house an installation of 28 vitrine towers in dark glass which, alongside the black and brunt-out pieces, will symbolise the destruction caused by the 28 bombs dropped on the city of Guernica during the Spanish Civil War. Here, all Koh’s poetics will revolve around war and destruction, through individual pieces, each with their own identity, that together take on the form of an installation with a whole new meaning.

In the adjoining room, a golden light will fill the entire space, swathing a number of black pieces (GOD, 2007 and MI + T, July 1, 2007, 2007) arranged as a still life where the light and the works conjure the mysticism of religion and human beings’ fleeting existence.

The fourth room will hold a new piece created specifically for the exhibition. A large vitrine, made up of over 300 horizontal units, will fill a large section of the room from wall to wall. The vitrine will be empty for the most part, though some of the sections will contain some white sculptures such as bull’s horns and bullfighter’s spears painted white, representing the essence of Spain’s culture of death and festive spirit. Looking through these vitrines, the public will catch a glimpse of the installation The end of my life as a rabbit in love (2007) where, by way of a funeral celebration in white (bearing in mind that for many cultures white is the colour of mourning), a set of sculpted spheres reference the idea of yin and yang, a play on positives and negatives, the body and its disappearance, or the state of partnership and love.

Finally, in MUSAC’s largest hall, the artist will display a subtle installation, produced specifically for this space, where darkness and silence play a leading role in a piece that combines the essences of fire, encounters and the ephemeral.

Love for eternity will be rounded off with two of Koh’s existing performances, scheduled for the opening night, Mein Tod Mein Tod (2007) and The end of my life as a rabbit in love (2007).

These five major installations full of forms and objects in black, white and gold will cast a thread covering a number of episodes in Koh’s life and work, where he makes a permanent display of his multifaceted indentity:Asian-Canadian-Catholic-Buddhist-gay futuristic-ancestral, young or mature... All in all, a blend of mixtures that provides all the references required to address the decadence and fragility of human kind, our fears and our triumphs, joy and pain all at once. Love for eternity is the passage into a personal universe crammed with Koh’s wide ranging and diverse cultural references.

TERENCE KOH. 1980-2008: The publication
Alongside the exhibition, MUSAC is to co-publish with Hatje Cantz a large book by the title TERENCE KOH. 1980 – 2008. The book will cover Koh’s entire career, including snapshots of his installations at MUSAC. The book will be launched in the months following the exhibition opening. This comprehensive publication will include contributions by Hans Ulrich Obrist, Exhibitions and Programmes Co-Director and Director of International Projects at London’s Serpentine Gallery; Bill Arning, MIT List Visual Arts Center at Massachusetts; and Agustín Pérez Rubio, MUSAC Head Curator and curator of the exhibition.
www.musac.es