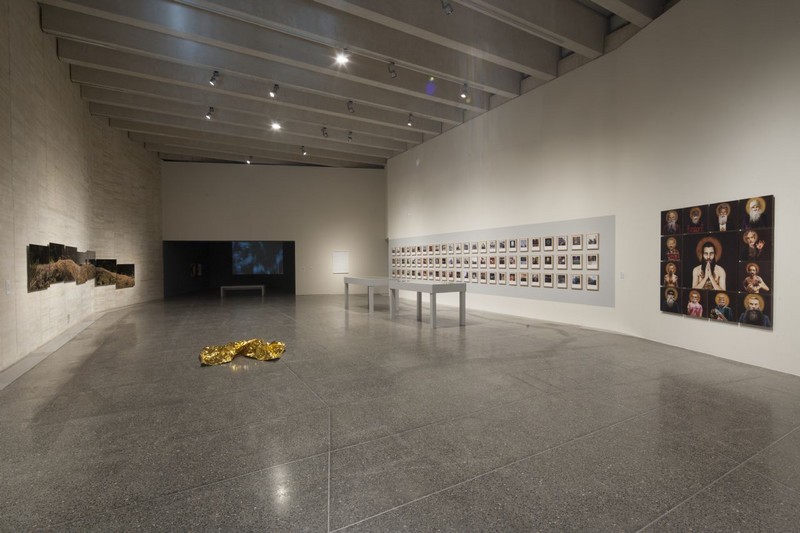 The project To See-To Reveal [Ver-(re)velar] is generated within the cultural context of a region such as Castile and Leon, where the different traditions and references and the presence of various religious manifestations have great importance in the shaping of a contextual identity. To See-To Reveal aims at showing, analysing and establishing relationships between those religious features (understanding the word religion in its original and radical sense of religare: to unite, to put in contact) and the use of the image and representations of one of the most extreme phenomena of popular religiosity: Mystic raptures, apparitions and spiritism, as well as visionary phenomena, phantasmagoria, trances, etc.

This is a reactive project, strongly related to the context of the Autonomous Community where it emerges, to the history, identities, traditions and the social and cultural environment of Castile and Leon (an aspect particularly present in Fuego en Castilla [Fire in Castile], a work by José Val del Omar), and above all to everything that escapes reason and we cannot explain scientifically. It is also linked to aspects of syncretism, popular religiosity, dependence and marginalization, or the representation of some religious imaginaries constructed as subordinate with respect to official ones or to the Enlightenment and Modern canon.

This kind of themes are very evident in one way or another in the work of many renowned artists, such as Dan Graham, Ana Mendieta, Maurizio Cattelan, Pierre Huyghe, Abdel Abdessemed, Paul Chan or León Ferrari. All of them address different aspects of religion, mysticism or spirituality from a contemporary point of view. In the case of the exhibition To See-To Reveal, specifically, those aspects focus on everything we are not able to explain (Joachim Koester’s or Gabriel Díaz’s works are good examples of it), mysticism (Val del Omar), popular scenes (Pablo García), those over-the-top facets of popular religiosity (such as apparitions and spiritistic phenomena), unknown dimensions (Marina Núñez) or randomness and things that defy our senses (Robert Breer or Michiel Ceulers). They are also associated to the construction of the representation or the image (many artists use archival material) and to the social and political horizon in which those phenomena take place (very present in Julia Montilla’s and Tamar Guimarães’ works, for instance).

In Tamar Guimarães’ and Julia Montilla’s work we see a clear exploration of the political, media and social use of mystic raptures and their interaction with the canonical Church’s law, power and authority. Indeed in both creators’ pieces, certain apparition phenomena (in Montilla’s case, the apparitions in Fátima, Portugal; in the photographical series Danza solar [Solar Dance] from 2008, or those from Ezkioga, Spain in the artist’s book Ezkiogazaleak, 2009) and mystic events (in Guimarães’ case, with her attention to the figure of the psychic, medium and psychographer Francisco Cándido Xavier, in her work A Man Called Love, 2007), appear in a clearly defined social and political horizon. Both deal with movements and expressions of popular religiosity that are not accepted by the official church and are intimately related to the dictatorships in Brazil and Spain. Also in both cases we are shown examples of a popular religiosity that is opposed to the official line (representing a bottom to top movement), but has also a reactionary attitude towards progressive changes. Against the background of Spanish and Brazilian Baroque heritage, due to its sensory stimulation and emotion-provoking dimension, religious and spiritistic paroxysm is closely connected to popular culture (psychics and mediums relate easily, although not exclusively, with less educated classes) and typically has a strong media impact (Fátima’s and Ezkioga’s apparitions or Francisco Cándido Xavier’s extrasensory perceptions were largely commented upon and widely spread by the press of the period). Because of this, in both cases it was necessary to create strong descriptions and a set of images, which, in fact, form the basis for Montilla’s and Guimarães’ works.

In many of the pieces of the selected artists, mystic, apparition and spiritistic phenomena appear as a kind of compensatory ritual for social (in Fátima’s or Ezkioga’s cases) or personal (in the case of Francisco Cándido Xavier) marginalisation, an imaginary solution to their impossible hunger for affirmation through the symbolisation of return (as in Joachim Koester’s work) and of contact with truth (Michiel Ceulers) from a simultaneously cultural, psychological and social perspective in a time of political changes and crisis. In Montilla’s and Guimarães’ previously mentioned pieces we can analyse and discuss, on the one hand, the creation of representations of popular religiosity and mysticism as a long metaphor for the return to the essential and the being. On the other, we are shown how forms of expression for a transcendental experience or a private hierophany —both very close to the mode of operation of popular religion— are developed.

All the themes addressed in the works of the selected artists are especially meaningful in a cultural space such as Castile and Leon, of a marked religiosity: most Spanish missionaries come from this region, traversed by the Way of St. James and its pilgrims and well-known for manifestations of popular religiosity such as Easter processions. In this sense, a project such as To See-To Reveal at MUSAC can be very appropriate because it deals with subject-matters that are somehow very close to wide sections of the public. Moreover, showing these works invites reflection on everything we cannot explain (animism, mysticism, apparitionism, pilgrimage, illumination, etc.), as well as on the activation of new spiritual movements and new forms of religiosity all around the globe, with a powerful influence in some popular classes. The whole has strong social and political implications, apart from some of a more private and personal character.

On the other hand, the pieces selected for this exhibition bring up for discussion the dialectics between the Modern project, heir of Reason and Enlightenment, and the expressions of mysticism, spirituality and popular religiosity that represent an alterity to that project. If Enlightenment’s reason and progress laid the foundation for a Western, Eurocentric and Exclusive Modernity, opposite references may help to lay the groundwork for new parameters (beyond a ‘critique’ to the construction of Modernity) from which to think multiculturalism, heterogeneity, syncretism and the coexistence of ‘hybrid cultures’ with which, from the ‘cultural and political’ peripheries we are redrawing the nowadays cultural map of reference. In this way, we not only make the public ‘see’ a cultural reality, but also delve into that which is ‘revealed’ by means of the creation of images and imaginaries, or, in other words, reflect on the very status of images in a society belonging to a global ‘iconosphere’ in which we must learn to see certain particularities that escape the canon, the establishment, or reason itself.

In conclusion, To See-To Reveal is an exhibition that shows and explores the different ways in which images have been produced and used to organise the knowledge of those things reason and science cannot explain, and through which the experience of perceptions and sensations that escape rational thought is shaped. The visual configurations proposed in this show reveal different attempts at representing a certain kind of knowledge via manifestations of supernatural events and descriptions and approaches to the invisible world. Quoting Rilke ("It is not the animal but the man that is blind. Blinded by consciousness, man is incapable of seeing the world.") and paraphrasing an aphorism attributed to Monet ("It is not a question of seeing what we see, because we do not see anything, but of painting what we cannot see."), we face the paradox of showing the conditions of visuality of the invisible.
www.musac.es