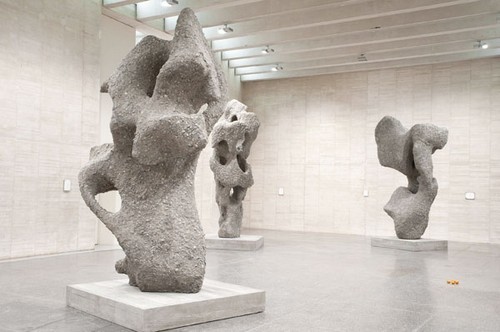 Ugo Rondinone’s The Night of Lead to be presented at MUSAC, the artist’s only museum exhibition this year

The Museo de Arte Contemporáneo de Castilla y León presents Swiss-born artist Ugo Rondinone’s solo debut in Spain. The Night of Lead, curated by Agustín Pérez Rubio, spearheads the calendar of events for 2009. The show will cover 2500 m2, half of the space normally allotted to temporary exhibitions. Ugo Rondinone employs a wide range of registers, accumulated during his last 20 years’ working experience. The result is a complex and melancholic artistic experience, a dreamscape that reflects Rondinone’s fascination with rituals, dreams, poetry and the everyday of the human condition.

Ugo Rondinone (Brunnen, 1964) is one of an outstanding generation of Swiss artists born in the 1960s, along with Pipilotti Rist and Thomas Hirschhorn. Recognised on international circuits from the early 1990s, the scathing defiance of his pieces calls for a new angle on artistic practice. His complex installations are produced with an unlikely mélange of painting, sculpture, video, paper, collage, light, sound, etc. This creative universe carries his unique signature, masterfully combining extreme pop with profound minimalism, articulated in a language at once private, nostalgic and subversive. His acclaimed installations have been shown in numerous cultural institutions: Rainbows (neon lights forming a large-scale rainbow, one of them being Hell, Yes!, permanent installation on the façade of the New Museum, NY); If There Were Anywhere But Desert, (a new take on participation in art, set by a group of seven clown sculptures, each representing one day of the week, undergoing inexplicable agony) and Twentyforhours, large wooden crossed panels combined with a constant breathing sound – whose purposefully formal nature which demonstrate the artist’s constant pursuit of autonomy in his artistic practice.

Resident in New York for over ten years, Rondinone has carried out projects for some the most renowned international centres: Whitechapel Gallery (London, 2006); Museum of Contemporary Art (Sydney, 2003); Kunsthalle Vienna (2002); 2007 Edition of La Bienalle di Venezia (representing Switzerland along with Urs Fischer); and his recent project as curator at the Palais de Tokyo of The Third Mind, among others.

The Night of Lead – The Exhibition
Ugo Rondinone’s project titles spring from literature, folk music and poetry, his sources of influence. In this case, the title comes from expressionist writer Hans Henny Jahnn’s book Die Nacht aus Blei (The Night of Lead) which, in the artist’s words “is about a nameless person who walks into an unknown city on a winter’s night and encounters himself twenty years younger, and dying. The older self guides the younger trough the night, and by the morning the younger self is dead. The novel deals with identity and self-reflection, about how the shelter of the night encourages honesty and catharsis, how the life of the narrator is always at the mercy of its own narration”.

In the same way as the novel, Ugo Rondinone uses his massive installations – produced specifically for MUSAC – to describe an introspective journey through a dreamscape, an oniric and emotional experience. The exhibition is divided into five main chapters, representing the idea of a dense, heavy, sleepless night through a web of room events that traverse the boundaries between dream state and reality through asymmetric settings of symbols and metaphors and the manipulation of space and time. All five rooms work simultaneously, in synchronicity, instead of serially, very much in the same way as dream symbols and dream voices. As with dreams, the symbols and metaphors in play strive towards condensation, free association and communal resonance. With the aid of the show’s curator, Rondinone combines new productions with previous works, making the most of the Museum’s ample floor space. The impact: large sculptural assemblages placed next to small figures, grandscale canvases next to small tablets worked in plaster, the pairing of the banal and the sublime. Emotionally charged spaces are recreated through the installation of videos or readymades. More than 50 pieces and a myriad of expressive forms draw the viewer into the artist’s poetic world.

The lure begins with a cluster of six 2000 years old olive trees and a huge light bulb sculpture. The viewer/participant has no choice but to engage in alternative ways of perceiving images and their narrative baggage. More than a tangible reality, this simulated landscape (still-inert) speaks of the road travelled and memories gathered, of the reflection about time and nature. Further on, one enters a room where fourteen large-format paintings centre around the sculpture If There Were Anywhere But Desert, Tuesday 2002. An alter ego of the artist, a clown who has lost all semantic power – no longer in its appropriate role, the figure lies withered and defeated by the vastness of the starry horizon he sees ahead or has already taken in.

The viewer then enters a space filled with Scholar Rocks, five rock-shaped sculptures made of concrete and rock. Large- scale sculptures reminiscent of the unique rock formations in the Chinese region of Lake Tai, which the artists collects and surround him in his daily life. These sculptures are accompanied by tiny paintings on plaster. Each tiny painting depicts an “unsubstantial” theme on the front (painted on-site on the streets of New York) and a collage on the back (made up of that day’s clippings of the New York Times). In this piece, Rondinone evokes the universal themes that attract him: the obsession with time, the burden of existence, nature’s sarcasm and the artist’s own determination to find a meeting point between personal and collective suffering. For the latter, he chooses a collection of materials steeped in symbolism. In doing so, he makes an ironic nod at the relationship between man’s trivial conception of time and the previously established time of his surroundings.

The two closing pieces are called Still. Life (John’s fireplace) (sculpture) and It’s Late... (video installation). The former belongs to the series of cast bronzes filled with lead entitled Still. Life, and this specific piece is a replica of American poet John Giorno’s fireplace in his New York apartment. The tour ends with It’s late..., a video installation consisting of six black and white projections flooded by blue light coming from the installation’s ceiling. This is the only piece in the exhibition that depicts the human form trough the daily “actions” performed by a man and a woman, twelve sequences in a loop accompanied by the constant repetition of the words “everyday sunshine”, which reinforce the dull and insipid nature of the actions taking place onscreen. With these ambients dominated by psychical aspect, the emotional memory or the fracture of the action, Ugo Rondinone’s project for MUSAC comes to an end. Throughout the exhibition, the viewer is transported to many different places, ultimately he/she is forced to look inward and examine reality from personal experience.

The Night of Lead – The book

An exhibition catalogue (Spanish – English - German) will be published in joint collaboration with Aargauer Kunsthaus (Aarau, Switzerland) and renowned international publisher JRP
Ringer to make it available to a broader public. Ugo Rondinone will design the book by hand, presenting a new approach to his most recent and defining works. The catalogue, slated for
publication early next year, will contain the curator’s text focused on the show itself as well as two previously unpublished writings on the artist’s work.

Moreover, on occasion of the exhibition The Night of Lead at MUSAC, Ugo Rondinone has come out with a limited edition piece entitled ELEVEN SUNSETS. TWENTYTWO DAWNS. ALL
IN ONE: a numbered edition of 50 photographs of each of his hand, or a total of 100 copies mounted on aluminium, signed and certified by the artist. These are for individual sale at the
MUSAC store.

As an active participant in art of the present, MUSAC hosts interdisciplinary activities that give voice to new art forms frequently absent in institutionalised art centres. To celebrate the opening of The Night of Lead, MUSAC will stage a performance by John Giorno. This American artist will perform a reading in Hall 5 (installation space of Still. Life (John’s
fireplace). This will be John Giorno’s debut before an audience in León. MUSAC will publish an accompanying booklet with a selection in Spanish of the poems Giorno will read.

John Giorno (NY, 1936) was a key figure in the Beatnick movement and the New York School of poetry. Creator of Dial-a-poem, along with William Burroughs, he searched for fresh ways to get poetry to the people. In 1965 he founded the record label Giorno Poetry System where he produced names like Robert Crealy, John Cage, Patti Smith and Sonic Youth, among others. He starred in Andy Warhol's second film Sleep. His works have been publicly acclaimed and he is considered one of the pioneers of the poetic evolution which gave way to the Spoken Word, currently one of the most significant poetry genres in the US.

Parallel Activities in relation with the exhibition The Night of Lead
Starting November, MUSAC will organize a film cycle in which Ugo Rondinone will have a carte blanche to select a series of films of reference related to the exhibition.
www.musac.es