What It Is To Come Has Already Arrived 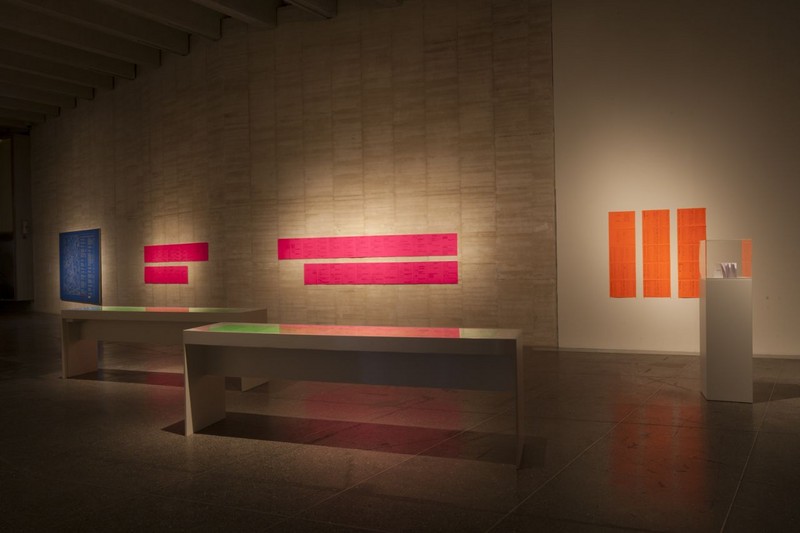 What It Is To Come Has Already Arrived is the title of the project that examines the circumstances of the present moment based on what we expect, hope for or intuit about the immediate future. The exhibition attempts to sketch possible channels of future progress which, though not necessarily opposed to the prevailing systems in contemporary societies, do present alternatives that herald the advent of a different civic status quo.

The show encompasses multiple disciplines, using videos, installations, paintings, drawings and photographs by twenty-odd international contemporary artists and collectives to reveal one of the potential faces of utopia in today"s world. It is therefore essentially a showcase of proposals, though it is also liberally sprinkled with elements that encourage us to reconsider the ethos of modernity and how our notion of progress changed during the most frenetic years of activity in the past century.

The show is divided into three closely interrelated sections. The first, Reactiving Utopia, addresses the possibility of imagining new utopian horizons as opposed to the idea of an immutable reality defined by Neoliberalism. Mathias Poledna filmed a documentary on Fondazione Feltrinelli, which safeguards one of the world’s most important archives on the history of twentieth century workers movements. In his micronations, Peter Coffin outlines the history of initiatives that have proclaimed the creation of independent sovereign states. Claire Pentecost explores the possibility of replacing the standards of money and gold for what she calls “soil-erg”: ingots of soil or compost as a standard for economic exchange. The Czech artist Stefanos Tsivopoulos has created a large archive that examines the relationship between objects that have been used as forms of currency throughout history. In Conocimiento común Sarah Browne has collected a series of plants that are pressed between pages in books that represent a metaphoric index of interests. Estudios utópicos contains an archive of images related with an academic microcommunity whose members have come together to study utopia and to put it into practice. In the video La fabricación de utopía, the artists Tellervo Kalleinen & Oliver Kochta-Kalleinen analyse four communities whose philosophy combines features of old-school hippy communes with new models of self-sustainable ecovillages. In Nouvelle Science Vague Fiction, Regina de Miguel undertakes a reflection on the scientific image and on the legitimisation that science makes of its discourse. The Temple Crew is a collective that embraces collaborations from hundreds of people. Its work lies in materialising ephemeral public art structures that seek to create places for reflection or celebration. In her work Anna Moreno analyses the relationship between art and politics, activism, democracy and civil rights and the role played by art practices as an instrument for social change.

The second section, Modernism, An Unfinished Project?, grounds its starting point in proposals dating from the 1960s that, while based on faith in the notion of progress inherited from modernism, put forward different forms of development and cohabitation for the immediate future, and investigate their possible validity when it comes to conceiving new models for the configuration of everyday life which can activate sustainable development. The veteran Romanian architect Yona Friedman has developed a major theoretical corpus that proposes a kind of city that is not defined by its uses, but by its collective possibilities and which is frontally opposed to the ploys of land speculation, the deterioration of public services and the disappearance of civil rights in detriment to the economic benefit of an elite. In the documentary Une ville à Chandigarh, the film director Alain Tanner narrates the changing fortunes of Le Corbusier’s design and construction of what was to be a new capital of the province of Punjab, in India. With his images and a commentary by the writer John Berger, Tanner constructs an incisive essay on how the planning of the city can contribute to the cultural and socio-economic progress of its inhabitants. Meanwhile, the manipulated photos by Dionisio González digitally reconstruct some of the buildings which Le Corbusier was never able to build in Chandigarh, with the purpose of rescuing from oblivion a project that aspired to generate other models of coexistence. In his painting David Diao appropriates spaces created by architects that incarnate rationalist utopias, as in the case of Philip Johnson among others, to compose a series of cartographies on modernism where he underlines its contradictions and the weakness of a large part of its certainties. The video by the Finnish artist Mika Taanila centres on a model of a house conceived in the 1950s, with a groundbreaking futurist design, economic and simple to build which represented the spirit of progress, well-being at a low cost and a faith in the future that characterised that time.

Finally, the third section, The Future is Already Here, showcases various works and experiences that reflect on or propose strategies for intervention and collaboration to trigger change, and the quest for a participative democratisation of structures with a new style. These approaches mean that citizens must not only demand from the political class and from economic powers a respect for the rights conquered but they must also take an active role in the construction of new forms of cohabitation. Thus, the Chilean filmmaker Cecilia Barriga, in her work Tres instantes, casts a spotlight on three different scenes that crystallised public discontent: Madrid, May 2011, during the protests known as 15M; New York, during Occupy Wall Street, and Santiago de Chile, where the movement of secondary school students Toma el colegio took over schools pacifically for seven months in 2012; the film takes a look at the processes of self-organisation and cooperation that made it possible to sustain them over time. Also on show are documents and materials used in the protests in Madrid which are on loan from the 15M Files. Alongside these, the small paintings made by the Romanian artist Mona Vatamanu and the Swiss artist Florin Tudor reproduce images of protests and scenes of police repression in different countries to underscore the interchangeability and similarity in forms of reaction. These works engaging with the idea of citizen and community power are further reinforced by Carolina Caycedo, who managed to survive between 2002 and 2009 exclusively on bartering, and her proposal for the exchange of a book on her experiences for another brought by visitors to the exhibition. On the other hand, there are projects by two teams of architects: by Druot, Lacaton & Vassal, undertaken in Paris and which has become a benchmark for refurbishment, saving and sustainability; and another one currently under construction by the Spanish team Ecosistema urbano, for a school in Italy, where students are involved in its environmental functioning as part of the educational programme. Finally, Zemos98, a collective focused on the production of contents and tools for the field of education, communication and visual creation, proposes a commitment with free culture and collaborative networks in opposition to productive models currently in force in our society.
www.musac.es