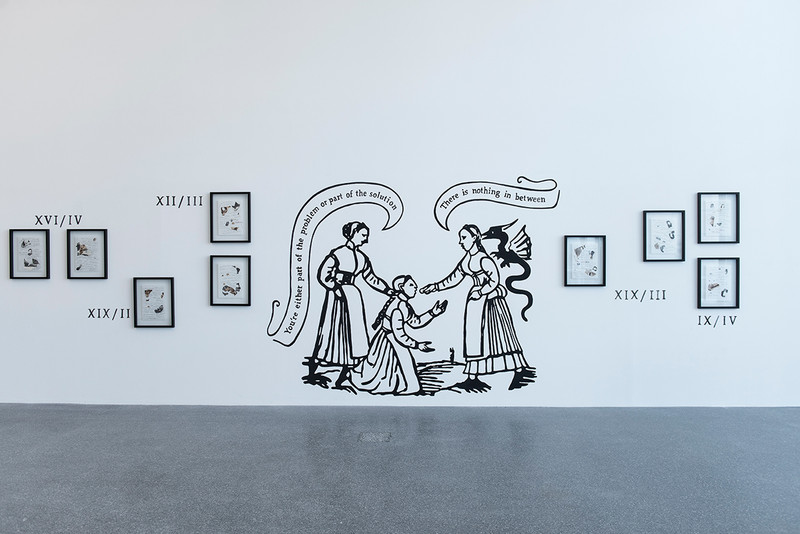 “Either you’re part of the problem or you’re part of the solution. There is nothing in between”. This is the phrase spoken by two female figures dressed in sixteenth century costume as they administer communion to a third woman. The quote was a favourite with the German terrorist Ulrike Meinhof, while the figures come from an ancient grimoire (book of magic). This disquieting, surreal scene is depicted in the wall painting that is part of the new project by Chiara Fumai (Rome, 1978), opening the 2015 season in the project room.
It is not an exhibition in the classic sense, but, in line with the experimental mission of the Project Room, a project that also features a live performance by the artist, closely related to the Museion venue and its exhibitions. On eight dates from January to April Fumai will take visitors on a tour of an exhibition by another artist, Rossella Biscotti, on in the same period on the fourth floor of the museum. Visitors should not expect a simple guided tour, however: Chiara Fumai overlaps and evokes fragments of recent history to bring alive the voice and story of the German journalist and terrorist Ulrike Meinhof.
In the project for Museion Meinhof’s rebellious spirit and political activism are linked to the imagery in the medieval treatise against witchcraft entitled Malleus Maleficarum, which was published by the Dominican friars Heinrich Kramer and Jacob Sprengler in 1478 (the German translation, Der Hexenhammer, is the title of the exhibition). In the large painting on the wall of the Project Room, Fumai also includes some of the scripts for the performance in the form of collage and automatic writing, incorporating the figure of the terrorist into her universe.
The project is accompanied by a free journal in three languages (it/en/dt) by Érik Bordeleau (Concordia University, Montreal).

Chiara Fumai (Rome, 1978, lives and works in Brussels) has had solo shows in institutions like MACRO Testaccio, Rome (2011), Muratcentoventidue, Bari (2011) and Careof, Milan (2008); group exhibitions include Fondazione Querini Stampalia, Venice (2013) and dOCUMENTA (13), Kassel 2012. In 2013 she was awarded the Furla Prize, a biannual accolade for contemporary art devoted to young Italian artists.
www.museion.it