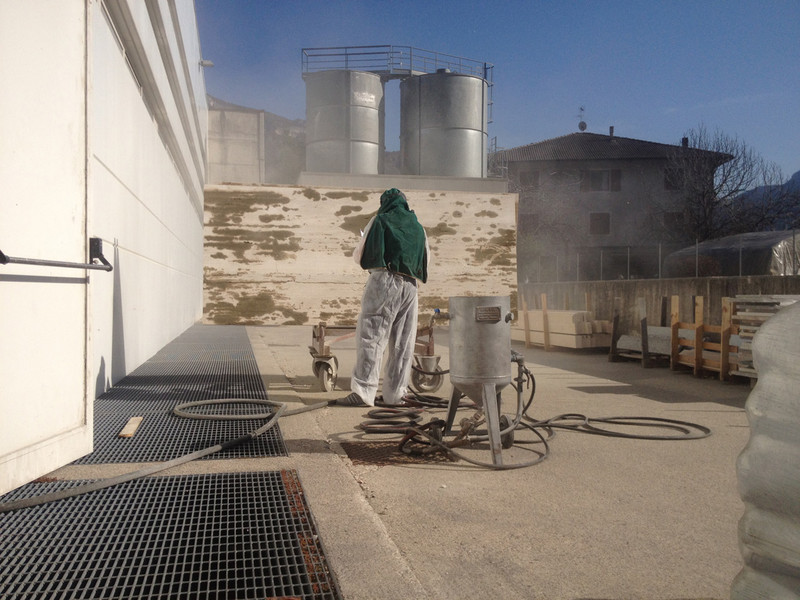 The installation conceived for Museion by Arena took the form of three slabs of travertine – a triptych – in which the artist used a sculptural process to link two historical events of 1957, as per the title.
This first event that inspired Trittico 57 is an operation of completion that regards the city of Bolzano. On occasion of a visit by the Italian President Giovanni Gronchi, it was decided that the monumental frieze that Hans Piffrader had created in 1943 for the Casa Littoria, the building which now hosts Bolzano’s Finance Offices, should finally be completed. The three missing slabs completed the figure of Mussolini on horseback.
The second historical event was Italo Calvino’s resignation from the Italian Communist Party on 7th August of the same year. With a letter published in the newspaper L’Unità the writer publically dissociated himself from the Party, due to its reactionary vision of Communism. The dialogue between these two opposing movements is what interests the artist: something is being attached (the three slabs of the frieze), while someone else is detaching – Calvino leaving the party that was a formative part of his culture. The effigy of a dictator, Mussolini, being recomposed, is offset by the effigy of another dictator – Stalin – finally being exposed.
In Trittico 57 these two historical events converged, or collapsed, as the artist says. The three slabs that made up Arena’s installation were the same size and material as those used to complete Piffrader’s frieze in 1957. The travertine, a stone often used for monuments, bore a new bas-relief that united two episodes in history: the artist sculpted the letter written by Calvino in 1957 in Morse code on the stone. The artist has been using Morse code – with its basic movements of attaching and detaching, striking and raising – for some time now, interwoven with his interest in history, and he has already used it to translate, or, as he puts it, read in stone, the words of writers.


The feeling of rhythmic and temporal continuity created by the dots and dashes takes precedence over the meaning of the letters and words. To sculpt the letter Arena used a sandblaster, a machine that can be used both to clean the surface of stone but also to wear it down, like the action of time on inscriptions and ancient sculptures. The jet of sand is like the explosion of an historic hourglass: sand can be used to bury something in silence or for building, acting as a binding agent. The operation involved in making Trittico 57 pointed up the ambivalent nature of many interpretations of history: clarification leads to erosion, and the two processes are inseparable. Like all of Arena’s works, the project for Museion was the result of a process, in which the interventions on form and matter represent the final stage in a personal engagement with themes and events in Italian history.
www.museion.it