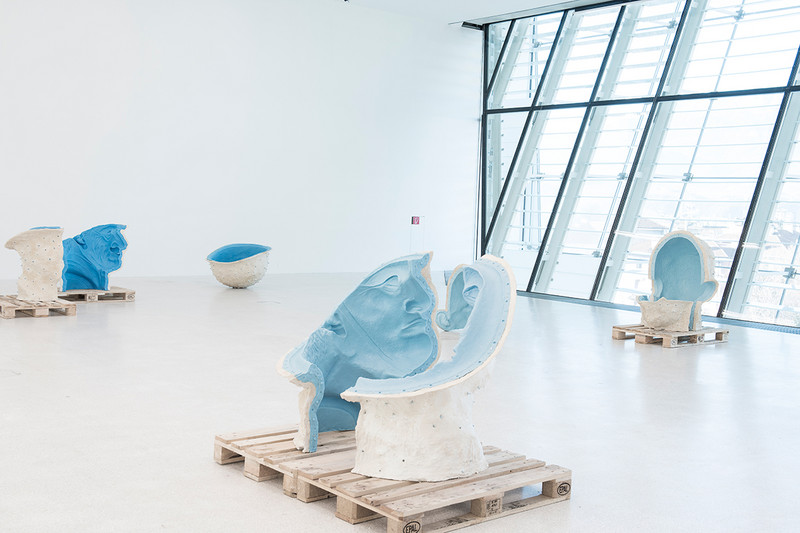 The solo show, the artist’s first in an Italian museum, traces some of the key stages in her career, without being a retrospective. Biscotti has responded to Museion’s invitation by creating new works and presenting traces of existing pieces – the exhibition includes casts of the 2009 project “Le Teste in Oggetto”, five bronze heads of King Vittorio Emanuele III and Benito Mussolini produced in 1942 for the Universal Expo in Rome, subsequently cancelled, and “The Prison of Santo Stefano” (2011-13), tracings of parts of the floor and cells of the prison in Italy’s Pontine Island. The nature of the works reveals much about the art and modus operandi of Rossella Biscotti, whose recent interest in sculpture confirms her predilection for an open, progressive approach. All the pieces on display – videos, photographs and works on paper – have an undeniable socio-political component, but the exhibition also reveals how this is infused with an imaginative, evocative vision.
Viewers are elicited to explore these physical traces, activating their own sensations and emotions: engaging with Biscotti’s pieces gives key insights into how power structures and interpretations of history can condition us both physically and psychologically.

Rossella Biscotti (Molfetta 1978, lives and works in Brussels), MAXXI prize winner (2010), took part in dOCUMENTA (13) in Kassel in 2012 and the Venice Biennale (2013). For Museion the artist created a project on the concentration camp in Bolzano (2008) and took part in the group show “The New Public” (2012).
The exhibition is accompanied by a catalogue in three languages (it/en/dt) with texts by Letizia Ragaglia, Chus Martinéz and a conversation between Rossella Biscotti and Cesare Pietroiusti.
www.museion.it