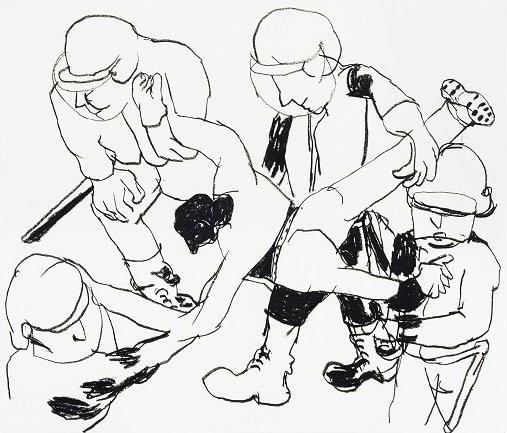 The line is the primary formulation in the imaginary of Anne-Marie Schneider (Chauny, France, 1962), in which autobiographical activity also has a strong presence. The line refers to gestural writing and gives shape to the enigmatic world of personages whose bodies are often taken apart and fitted back together in fragments, prolonged in domestic space and projected on to the landscape. Schneider’s fascination with everyday situations and banal objects reveals a certain degree of explicit violence in her lines; fable, satire, black humour and absurdity comprise highly personal work, whereby improvisation inhabits the same space as a precise and calculated form of expression.

The exhibition displays the evolution of the artist’s work, spanning from her initial, starkly linear and anti-pictorial drawings to the introduction of colour at the end of the 1990s. In her early forays colour was employed to fill the lines, yet she would soon begin to differentiate between lines and strokes, leading to the polychrome and a flat monochrome she used to broaden her thematic repertoire as she explored fable in La bella y la bestia (Beauty and the Beast, 2009), before returning to the body and space in her most recent gouache pieces.

In 1996 Schneider produced a series devoted to the eviction of “undocumented” people from Saint-Bernard, heralding a breakaway from the intimate universe that had inhabited her work until that juncture. The show includes this key series, which was also on view at Documenta X, in addition to the four films Schneider has produced to date and which, in some way, transfer drawing and graphic art on to the screen, making use of the moving image as a tool for reproducing the world and montage as a medium for registering the movements of humans and things that make up reality.