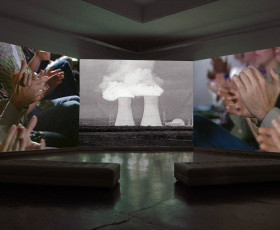 Considered one of the pioneers of media art and conceptual art in Spain, for over four decades Antoni Muntadas (Barcelona, 1942) has been creating projects that foment critical reflection about key issues in the configuration of contemporary experience. His aim is to detect and decode the control and power mechanisms through which hegemonic ways of seeing are built, exploring the decisive role played by the mass media in this process. In his works, which always have a clear processual dimension and often make a direct call for viewer participation, Muntadas uses a number of media, languages and discursive strategies, from interventions in public space to video and photography, from the publication of printed material to the use of Internet and the new digital tools, from multimedia installations to the organisation of multidisciplinary, collaborative research projects.

Throughout his career, Antoni Muntadas, who conceives of his works as "artefacts" (in the anthropological sense of the term, i.e. things that can be viewed in different ways depending on the context and the moment they are presented), has addressed topics such as the changing relationship between the public and the private, the naturalization of the logic of consumerism, the cultural homogenisation processes imposed by globalisation, the use of architecture as a tool for legitimating political and economic power, the importance of the mass media in the expansion of financial capitalism, the functioning of the artistic ecosystem or the exploitation of the fear of the "other" as a strategy for social control.

Entre/Between, which is structured around nine blocks or "thematic constellations" – Microspaces, Media landscape, Spheres of power, Public territories, Spectacle Spaces, The construction of fear, Scopes of translation, The archive and Systems of art – attempts to offer a complex, exhaustive and non-linear reading of Muntadas' artistic activity. The show includes some of his earliest pieces, which focus more on bodily and sensorial experience than on conceptual reflection, and various pieces that reveal autobiographical information about the artist, and also some of his most emblematic projects, such as Exposición-Exhibition(1985-1987), The Board Room (1987),The File Room(1994) and a selection of works included in his series On Translation (1995-2011). In addition, Muntadas has created a project specifically for this exhibition, entitled Situación 2011. This piece, which takes as its point of departure an intervention he did at the Museum when it was inaugurated, critically examines the expansion and enlargement process that the main international museum institutions have undergone in recent years.
www.museoreinasofia.es