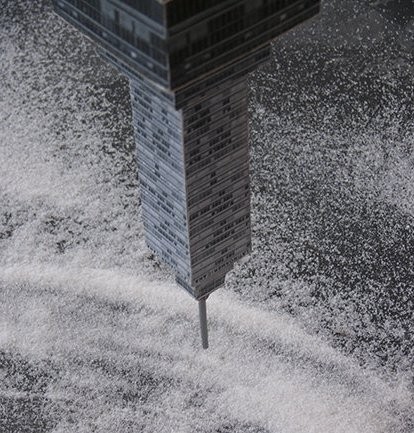 Damián Ortega (Mexico City, 1967) started out as a newspaper cartoonist in the 1980s, approaching the political scene with acerbic wit. His artistic concerns shifted when he joined the Taller de los Viernes (Friday Workshop) in Tlalpan (active from 1987 to 1992), a self-styled school and the place where he would come into contact with a creative community that was both diverse and an alternative to the dominant reactionary muralism in Mexico at the time. It was in this milieu that he realised his first sculptures, continuing the ironic tone from his previous profession.

Throughout his oeuvre, Ortega’s interests have been sparked by particular situations and everyday objects, which he alters and transforms to raise questions on broader notions, for instance the economic, social and political discourses that articulate matter and the relationships it is encapsulated within. It is precisely matter on numerous levels, from its composition and molecular behaviour to the discourses that shape it or place it in the dynamics of property and hierarchy, that is at the heart of his investigations.

In this regard, architecture sits in a privileged place as the artist places emphasis on its skin-like nature, as a border that divides space and determines its perception. For instance, the height of a building calls into question the laws of gravity, whilst also describing a discursive framework – the language of diverse interests. Works like Materia y espíritu (Matter and Spirit, 2004), Piel (Skin, 2007) and Pirámide invertida (Inverted Pyramid 2009–2010) explore the twofold nature of architectural aspects, the physical and the symbolic. With De la serie Torre Latino (From the Torre Latino Series, 2007) he proceeds from a specific construction, Augusto H. Álvarez’s Torre Latinoamérica, built between 1949 and 1956 and regarded as one of the most relevant exponents of modern architecture in Mexico. Ortega considers the singular nature of its foundations, which possess an elasticity that is resistant to earthquakes in the area. In his piece he buries them in a globe, out of which a tower rises to underscore the building’s inherent resolve to endure and overcome adverse conditions.

For his intervention in the Palacio de Cristal, Ortega revisits the Torre Latinoamérica, in this instance turning it into a pendulum and inverting and suspending it, using a steel wire, from the highest dome in the Palacio. It is structured by printed skin, thus setting up an interplay between its flexibility and ductility and the solidity represented by the architectural structure. Its hollowed interior houses a sand tank which, like an hourglass, and as the pendulum oscillates, releases grains of sand on the ground to draw unpredictable forms. This last aspect – the movements and unexpected variations produced in matter – are at the core of other pieces such as Tusks (2012) and Materia en reposo (Resting Matter, 2004).

Damián Ortega’s artistic career is extensive, and he has been the subject of solo exhibitions in art centres and museums around the world, for instance HangarBicocca in Milan (2015), the Museo Jumex in Mexico City (2014), the Museum of Contemporary Art, Los Angeles (2005), Tate Modern in London (2005), the Kunsthalle in Basel (2004) and ICA, Philadelphia (2002). He also participated in the 50th Venice Biennale (2003) and the 27th São Paulo Biennial (2006) and, in parallel, he has carried out significant publishing work as co-editor and contributor for Casper Magazine, between 1998 and 1999, and as the editor of the Alias project, which disseminates the work and thought of authors who are highly relevant to contemporary art and previously unpublished in the Spanish language.
www.museoreinasofia.es