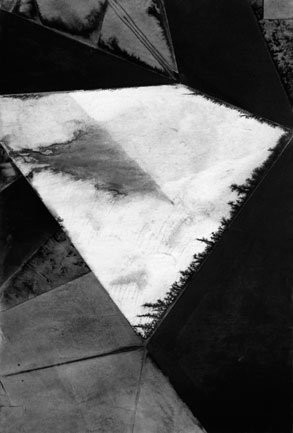 The work of Erlea Maneros Zabala (Bilbao, 1977) analyses the conditions and effects of image production, addressing the contexts generated and the modes of distribution. The issues raised by her work can be found in the academisation of languages of abstraction, the notion of authorship and the relationships established between handicrafts and mass production through the use of mechanical resources in production processes.

This site-specific project for the Fisuras (Fissures) programme sees the artist proceed from works belonging to the Museo’s Collection. Taking the name of the programme in its most “material” sense, as a crevice, it connects exhibition rooms on two floors of the Sabatini Building: room 403, on the 4th floor, devoted to works from the Collection, with Space 1, on the 1st floor, which contains temporary shows.

A selection of ink drawings on paper is also presented from the series Exercises on abstraction (2007–2015), with some forming part of the Collection and others belonging to works produced between 2014 and 2015.

Erlea Maneros Zabala’s studied at the Glasgow School of Art and CalArts in Los Angeles, her current city of residence. Her work has been exhibited in institutions that include Museo Experimental El Eco (Mexico City), REDCAT (Los Angeles), Guggenheim Museum (Bilbao) and the Kadist Art Foundation (Paris).
www.museoreinasofia.es